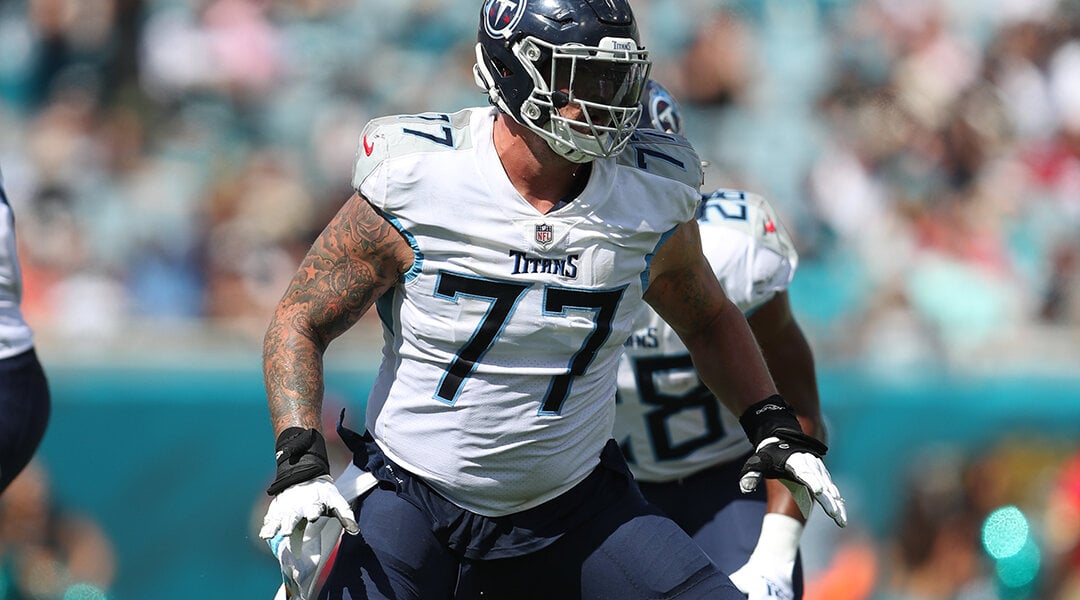 What Do NFL Offensive Lineman Wear? Here’s the Helmets, Cleats and Gloves Worn by NFL Starting OL in 2021

For the second straight season, we have researched all 704 NFL Starters to get a full picture of the helmets, cleats and gloves worn by NFL football players. While completing this research is a tall task, it provides us with valuable information about what the world’s best football players wear. We have calculated the brand share and even honed in on some of the specific models these pros are wearing. For this article, we’ll be focusing on the most underrated members of the offense – the Offensive Line.

With every single snap, offensive lineman are going to battle in the trenches. Offensive line and defensive line are the only positions to face real contact every play they’re on the field. Every time the football is hiked, the 2 sides of the ball are clashing their heads against each other, clamoring for control of the line of scrimmage. This battle is incredibly violent so it’s important that these behemoths are well protected. Let’s take a look at what brands and helmet models are most popular among NFL Offensive Lineman.

The most popular helmet brand among the 160 NFL starting offensive lineman is Riddell – most of them wearing the Riddell Speedflex. The Speedflex has been the most popular helmet for the last several years because of it’s incredible safety ratings and modern design. The 5-star rated helmet features a hex panel on the front of the helmet. The job of this panel is to “flex” (hence the name Speedflex) to absorb contact. This helmet is a great option for offensive lineman because that flex panel is located right where OL experience the most contact – the front of the helmet. With each snap and hit the OL faces, the Speedflex will help reduce that impact and keep the wearer safe. Some of the league’s best pass protectors, including Trent Williams and Taylor Lewan, wear the Riddell Speedflex. Again, this is a great choice for anybody on the offensive line and costs about $470 from Riddell.

The other popular Riddell helmet, worn by 11 starting offensive lineman, is the Riddell Speed. The Speed was once the most popular helmet in football but has slowly been on the decline since the introduction of the Speedflex in 2014. The Speed is still a 5-star rated helmet and also one of the lightest in the game – weighing only 3.7 pounds. It’s a super sleek helmet and still worn by NFL veterans like Trai Turner and Tyron Smith. You can still get a Riddell Speed for about $350 and up.

This season, we saw 10% of NFL starting offensive lineman wearing Vicis football helmets. The most popular Vicis lid was the brand new Vicis Zero2. The Vicis Zero2 is the latest in helmet technology and the safest helmet ever tested. When it comes to helmet technology, nobody can top Vicis. Their 4-layer system does an incredible job absorbing energy and keeps your head safe. It’s a surprise we don’t see more NFL players wearing their helmets but to be fair, Vicis is relatively new to the game and their helmets are oddly shaped. But, as more safety concerns arise, I think Vicis’ usage will be on the rise. Check out the Vicis Zero2 on Vicis.com, starting at $700.

Vicis has even created a special version of the Zero2 built specifically for lineman – the Vicis Zero2 Trench. Right now, this helmet is only worn by Alex Mack, but I expect its usage to rise in the next couple years. This helmet is basically a regular Vicis Zero2 but with a frontal pad. This pad is fine tuned for the low-velocity impact that lineman face every single snap. This is the first position specific helmet we’ve seen and I hope to see more lineman wearing it next season. You can get the Vicis Zero2 Trench for $999 from Sports Unlimited.

The other popular Vicis helmet worn by NFL starting offensive lineman is the Vicis Zero1. The Zero1 was the first helmet from Vicis and shares the same technology as the Zero2. It’s also a 5-star rated helmet but a little bit heavier than the Zero2 is. This helmet is worn by David Bakhtiari, Eric Fisher and several other offensive lineman. The Vicis Zero1 is no longer available following the release of the new and improved Zero2.

Lastly, we have Schutt making up the final 5% of the brand share amongst NFL starting offensive lineman. The most popular Schutt model is the Schutt F7. The F7 is the latest helmet from Schutt and also one of their safest – scoring a perfect 5/5 on the VT Helmet rating scale. The key to its success is the “tektonic” plates on the top of the helmet. These plates move independently from the rest of the shell to disperse rotational force. The F7 is a great looking helmet but definitely not very popular among lineman (check out the F7’s dominance in the WR article). The Schutt F7 is worn by some of the leagues’ best bookends, Jason Peters and Lane Johnson. You can check out the Schutt F7 from $500-$1000 on Schutt’s website.

One of the most important aspects of an offensive linemans’ game, is footwork. Despite their monstrous appearance, the OL must be incredibly athletic and able to perform intricate steps. These steps are crucial when pulling, pass blocking and run blocking. These guys need a pair of cleats that gives them the ability to perform these nimble moves but also enough support to protect them in the trenches. Let’s take a look at the most popular cleats brands and models these guys are rocking.

Coming in 1st, with an astounding 84%, is Nike. When it comes to lineman cleats, nobody dedicates as much time and resources as Nike does and this number is proof of that. There are two main cleats that these offensive lineman are choosing – the Nike Force Savage Pro 2 and the Nike Zoom Code Elite. The Nike Force Savage Pro 2 is the latest lineman cleat from Nike and debuted in 2019. The cleat has a mid cut with an ankle strap for maximum support. It also has a wide, Nike “Alpha” traction plate with has long, sharp triangle studs. These studs allow lineman to have great traction and not lose their footing when making a block. Lastly, these cleats have small studs on the outside of the cleat. These studs protect the top of the wearers’ foot and prevent bruising if someone steps on their foot in the trenches. Some of the leagues’ best including Rashawn Slater and David Bakhtiari, wear these cleats. These are the ultimate lineman cleat and that’s why they have been the most popular since 2019. You can find these cleats on Amazon.

Like I mentioned earlier, the other popular Nike cleat is the Nike Zoom Code Elite. These cleats are initially released all the way back in 2013 or so but are still incredibly popular among offensive lineman. They’re super wide, supportive and look great. These are worn by some of the NFL’s most seasoned veterans, including Terron Armstead and Brandon Brooks. They’re a little tough to find since they’re almost 10 years old but there’s some floating around on Ebay.

For the last couple years, we’ve seen the usage of Jordan brand cleats grow in the NFL. This past season, we saw 12% of NFL starting offensive lineman rocking Jumpman football cleats. These guys were wearing various Jordan models but mostly the Jordan 1 and Jordan 10. Both of these silhouettes are perfect for these bigger guys. The cleats are wide, have plenty of ankle support and obviously look amazing. It’s so cool to see these 80s and 90s basketball silhouettes being utilized and brought to the gridiron. Some of the best NFL tackles, including Laremy Tunsil and Ronnie Stanley, are wearing Jordan football cleats. If you want a pair of Jordan cleats, we suggest you check StockX and GOAT.

Under Armour | Worn by 4% of NFL Starting Offensive Lineman

Lastly, we have Under Armour making up 4% of the brand share among NFL starting offensive lineman. The most popular UA cleat was the Under Armour Hammer. The UA Hammer is worn by both Buccaneers’ guards, Ali Marpet and Alex Cappa. The Hammer has excellent ankle support and a wide traction plate. They’re a solid option for any position on the OL. You can grab a pair for $100 from Academy.com.

Like I’ve already mentioned in this article, every single snap the offensive line goes to battle. These guys put their body on the line with every play and are fighting for control of the line of scrimmage. While doing this, their hands take an awful beating. Nearly every offensive lineman either wears a pair of protective gloves or tapes up their hands. These gloves are going to give their hands some extra support, protection, and make their jobs a little bit easier. Let’s check out the most popular glove brands and models among the fearless warriors on the offensive line.

The most popular glove brand worn by NFL starting OL is Nike, with an incredible 93% of the total brand share. To put this into perspective, we tracked 160 offensive lineman and only 11 aren’t wearing Nike gloves. The most popular Nike glove on the O-line is the Nike Dtack 6.0. The Dtack is a glove completely built for offensive lineman. These gloves have tons of padding on the back of hand, a leather-like palm, and a thick velcro strap. These are built for the trenches so it’s no surprise they are so popular. Some of the best offensive lineman on the planet, including Taylor Lewan and Quenton Nelson, wear the Nike Dtack 6.0. You can grab the Nike Dtack 6.0 from Dicks for $65.

In the second spot, we have Cutters with 4% of the brand share among NFL starting OL. We only saw a handful of lineman wearing Cutters gloves this season. The most popular pairs were Cutters Rev Pros. The Rev Pro line is a skill position glove but most of the lineman in them taped up their hands for added protection. Laremy Tunsil and Justin Britt were rocking Cutters gloves this past season. You can check out the Cutters Rev Pro 4.0 here.

Lastly, we have three starting offensive lineman who don’t wear any gloves whatsoever. These old-school style players are Nick Gates, Creed Humphrey and Rodney Hudson. All three of them wear some wrist tape and then maybe some extra tape on the fingers. It’s crazy to see anyone in the NFL not wearing gloves but these guys are tough as nails.

This season, we only saw one offensive lineman wearing Jordan Brand gloves – Cesar Ruiz. Ruiz is not signed with Jordan Brand but Saints teammate (and Jordan athlete), Cameron Jordan, hooks up the young lineman with Jordan swag. Ruiz wears the Jordan Superbad 5.0 but unfortunately, these are not available to the public.

Under Armour | Worn by 1% of NFL Starting Offensive Lineman

There you have it… the gear worn by the best offensive lineman in the world! Let us know what you think about our report in the comments below!