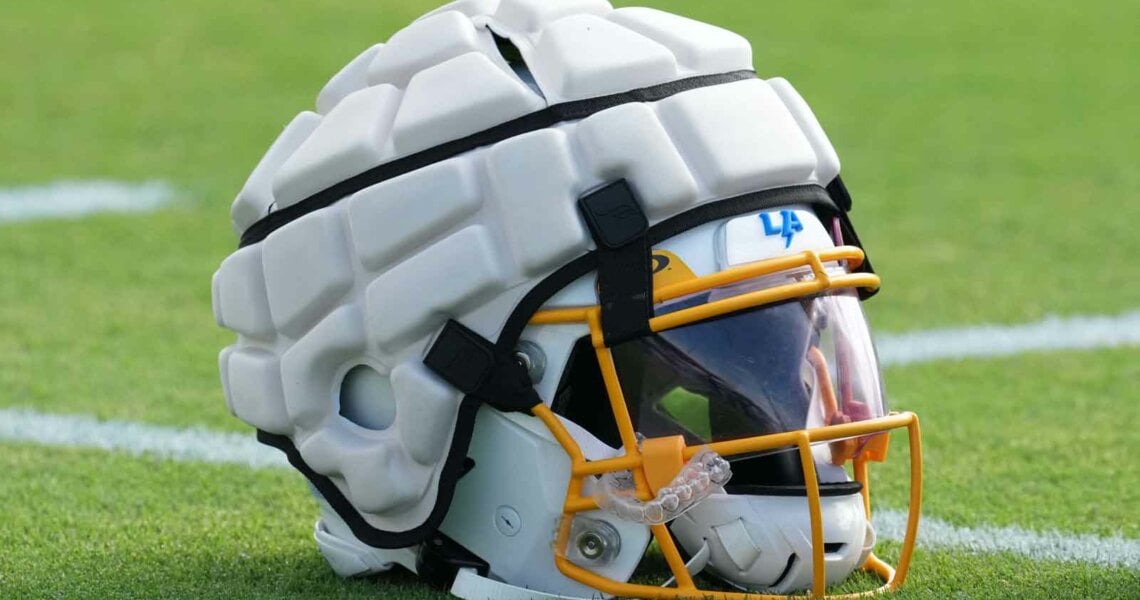 What is a Guardian Cap?

During NFL training camp and pre-season, you probably saw your favorite team wearing these bubble-wrap looking helmet covers. This new piece of equipment is the Guardian Cap. The guardian cap is a soft shell cap that attaches to the top of the helmet to help prevent avoidable head injuries. These caps use a soft material with proper density and impact absorbing materials to help absorb some of the force. By the time the impact makes it through both the guardian cap, and then the helmet, the impact has been greatly reduced. This technology is very similar to air-bags and car bumpers, both are a soft-shell barrier between it and the impact.

Why are NFL Teams wearing them?

During the annual league meeting in March, the NFL passed a resolution mandating certain positions to wear Guardian Caps from training camp, all the way up to the 2nd pre-season game.

Who is wearing them?

The league mandated that the Guardian Caps would be worn by offensive and defensive lineman, tight ends and linebackers. These are the positions that face the most contact and will benefit the most from wearing the Guardian Cap. Mike Tomlin and the Steelers organization actually mandated that the entire Steelers roster wear the Guardian Caps. “It’s for their safety,” coach Mike Tomlin said Tuesday of the decision, per the Pittsburgh Tribune-Review. “We don’t run away from those things. We run to those things. We’re going to make it a non-issue for us. It’s about the work that we do.” It sounds as if we will see more and more teams wearing these caps moving forward.

Now that training camp and the pre-season have wrapped up, we can take a peek at the data and see if these caps even work. Over the past 3 years (before the mandated use of the Guardian Caps), we saw an average of 23 concussions among the before mentioned position groups. With the usage of the guardian caps, we saw the average drop to 11. Of those 11 concussions, 6 were a result of a facemask impact which the caps cannot prevent. NFL executive, Jeff Miller stated, “The benefits of the Guardian Caps exceeded our expectations so far, We saw a more than 50% decrease in concussions among the affected groups”. Overall, it sounds like the Guardian Caps were a great success and it’ll be exciting to see if they decide to mandate them again next season.

What do the Players think?

There have been a couple different responses from players wearing the Guardian Caps. JJ Watt was pretty critical of the caps saying, “You feel like a bobblehead, Like you’re gonna fall over. I’ll probably get fined for this. This is great. You guys are just screwing me to start out the whole year. There’s 15 grand gone”. Now on the other hand, Rams offensive lineman, David Edwards, preached the importance of the guardian caps, “The Guardian Caps provided that extra layer of protection you needed during practice. The last thing you want is to lose players on the offensive and defensive lines to head injuries during practice or training camp. The cap helped reduce some of those injuries and was useful to our team last season.” It seems that some players love the caps and the protection it adds, but they aren’t for everyone.

Where can I get one?

Lucky for you guys, the Guardian Caps are available to everyone and for a price that doesn’t break the bank. For $45-$65, you can grab one for yourself in a couple different colorways and keep yourself protected in practice.