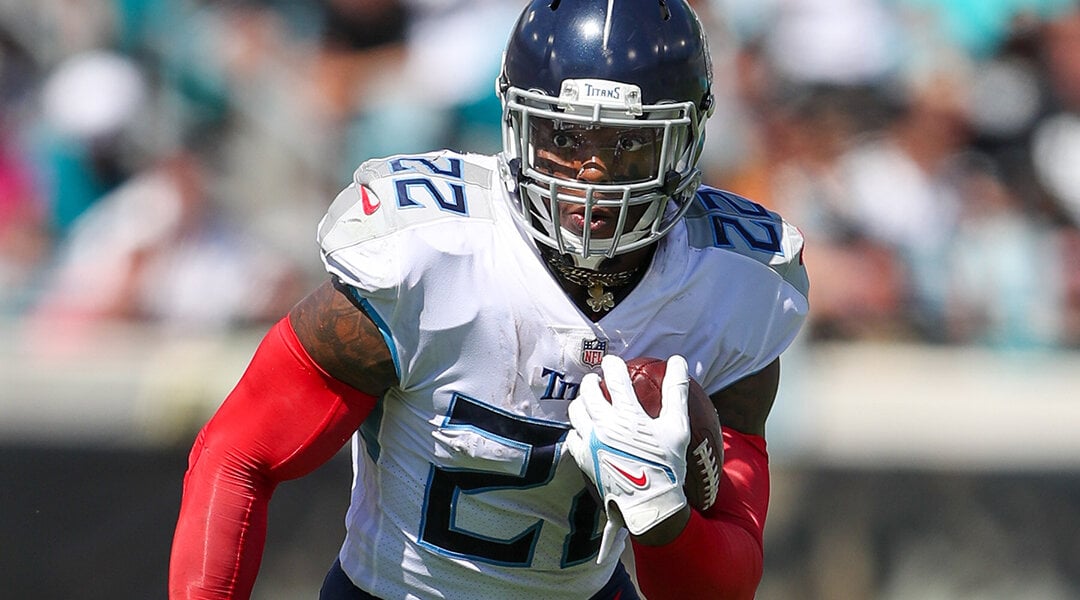 For the second straight season, we have researched all 704 NFL Starters and their helmets, cleats and gloves. While completing this research is a tall task, it provides us with valuable information about what the world’s best football players are wearing. We have calculated the brand share and even honed in on some of the specific models these pros are wearing. For this article, we’ll be focusing on the workhorse of the offense, the running back.

Running backs are the lifeblood of an NFL offense and put their body on the line with each snap. These warriors pound the rock between the tackles, catch passes out of the backfield, and help to block defenders coming off the edge. Running backs are notorious for having their careers cut short due to injury, so it’s crucial that they choose top of the line equipment. Let’s take a look at what helmets these dynamic playmakers are wearing on game day.

The other Riddell helmet, worn by 3 players, is the Riddell Speed. The Speed was once the most popular helmet in the game but is slowly phasing out due to the dominance of the Speedflex. Despite the Speeds’ age (debuted in 2008), it’s still a reputable football helmet. The Speed weighs only 3.7 pounds and scores a 5/5 on the VT Helmet Rating Scale. Derrick Henry, Cordarrelle Patterson, and Devin Singletary all rocked the Speed this past season. You can get an adult Speed from Riddell for $339 or a youth Speed for $229.

Coming in at number 2, we have Schutt. This past season we saw 6 (of 32) starting NFL running backs wearing Schutt football helmets. The most popular Schutt helmet, worn by do-it-all backs Saquon Barkley and Najee Harris, is the Schutt F7. The F7 is the latest innovation from Schutt and the best helmet that they currently offer. Also, the F7 was the second most popular helmet in the NFL this season (behind the Speedflex), and also one of the safest. It’s a 5-star rated helmet and also very light – weighing a little over 4 pounds. The F7 is my personal favorite helmet because of it’s sharp looks and overall comfort. You can check out the Schutt F7 from $500-$1000 on Schutt’s website.

At number 3 on the list, we have Vicis. Despite only 1 starting RB wearing a Vicis this season, it’s still an increase from last season (0%). David Johnson is the lone player rocking Vicis and he was wearing their newest model, the Vicis Zero2. The Zero2 is the #1 rated helmet by both the VT Helmet Rating Scale and the NFL/NFLPA. Since this is rated as the safest helmet ever, it’s hard to believe only 1 starting RB wore it this season. Check back next year to see if it’s usage grows in 2022. Check out the Vicis Zero2 on Vicis.com, starting at $700.

Lastly, we have Xenith with 3% of the total brand share among NFL starting running backs. The only player wearing Xenith is Browns’ powerback, Nick Chubb. Xenith helmets are very uncommon in the NFL, but Chubb has stayed loyal to his Xenith Epic+ since 2017. The Epic+ is another 5-star rated helmet but it’s lacrosse-esque appearance deters most buyers. All of Xenith’s helmets are currently out of stock but check out their website here.

Running backs are some of the most dynamic playmakers on the gridiron so it’s crucial that they have a pair of cleats that can handle anything. Most RB’s choose “skill” cleats which are typically low-cut, lightweight and strong enough for tough cuts and jukes. These cleats allow them to make guys miss in open field and turn on the burners on the way to the endzone. Let’s take a look at some of the most popular cleat brands and models from the 2020-21 season.

For the second straight season, Nike has completely dominated the cleat game amongst running backs. This year, 75% of them were rocking with the swoosh. Again, the most popular RB cleat was the Nike Vapor Untouchable Pro 3. Despite releasing nearly 4 years ago, these cleats are still a favorite among the leagues’ best. That fact alone speaks volumes about the performance of this cleat. The main reason behind this cleats’ popularity is it’s carbon fiber traction plate. This traction plate has diamond studs that grip the ground and the carbon fiber feels as if it’s springing you into your next step. These cleats actually make you feel like you’re running faster which is every running back’s dream. CMC, Chubb and Mixon were all in the Nike VUP3 this past season. These cleats are tough to find, but there are some on stockx.com and eBay.

The other popular cleat was the Nike Vapor Edge 360 Pro. This cleat is built for ultimate speed and lateral quickness – perfect for RBs. These vapors released in 2020 and are the latest innovation from Nike. These cleats are lightweight, comfortable and have incredible traction. The all-new “edge” traction plate has sharp studs strategically placed at the outermost points of your foot and allows you to cut quickly and efficiently. These cleats are so diverse and great for RBs like Saquon Barkley, Derrick Henry, and Ezekiel Elliott. You can grab the Nike Vapor Edge 360 Pro for $120 from Dicks.

This season, 22% of NFL starting running backs were living the Three Stripe life. The most popular Adidas cleat amongst these guys was the Adidas Adziero 11.0 SK Primenkit. The Adidas Adizero has been Adidas’ skill cleat for over a decade and known for being immensely lightweight and built for straight line speed. These cleats are perfect for NFL speed backs like Aaron Jones and David Montgomery. Check out the Adidas Adzero 11.0 Primeknit here for $150-$180.

Under Armour | Worn by 3% of NFL Running Backs

Last, but certainly not least, we have Under Armour making up 3% of the brand share among NFL starting running backs. There is only 1 starting RB who wore UA this past season and that’s the NFL’s leading rusher, Jonathan Taylor. Jtay exploded for 1800 yards and 18 TDs wearing the Under Armour Spotlight. The UA Spotlight is UA’s mid-tier speed cleat and very lightweight. Since UA ended their on-field licensing agreement with the NFL this past off-season, we’ve seen their usage dropping. If you guys are still rolling with Under Armour, you can check out the Under Armour Spotlight for $120.

Gloves are an absolute, must-have for running backs in 2021. RBs are expected to carry the rock inside and catch it out of the backfield. These gloves help minimize the risk of fumbling, dropping passes and also help protect their hands in the trenches. Let’s take a closer look at the brands and models these talented backs are choosing.

Similar to the cleat portion of this article, Nike remains king. Seventy-five percent of NFL starting running backs are wearing Nike football gloves. The two most popular models are the Nike Vapor Jet 6.0 and the Nike Superbad 6.0. The Vapor Jet 6.0 dropped in 2020 and is the latest receiver glove from Nike. These gloves are super sticky, comfortable and secure. They are some of the best fitting gloves on the market and are perfect for guys like Nick Chubb, Joe Mixon, and Dalvin Cook. These are a great glove for any skill position player and you can get them for $45 from Dicks.

The other very popular Nike glove is the Nike Superbad 6.0. The Superbad is Nike’s hybrid glove and an excellent glove for just about any position. These gloves have sticky “magnigrip” palms to aid in catching the football and also small pads on the back of hand to protect your hands in the trenches. Some of the league’s strongest backs, Derrick Henry, Saquon Barkley and Najee Harris, wore the Nike Superbad 6.0 this season. You can get the Superbad 6.0 from Dicks for $55.

Next up, the second most popular gloves brand worn by NFL starting running backs is Adidas. The most popular Adidas glove model is the Adidas Adizero 9.0/X. The 9.0/X released in 2020, yet it’s still more popular than their 2021 model. The Adizero X is a lightweight glove with a sticky GripTack palm. These are a great glove for skills guys and a popular choice among Adidas athlete like Aaron Jones and David Montgomery. You can purchase the Adidas Adizero 9.0/X for $45 from Dicks.

Lastly, we have Under Armour making up just 3% of the brand share of gloves worn by NFL starting running backs. The only player wearing Under Armour gloves is UA athlete, Jonathan Taylor. This season, Taylor has worn the Under Armour Highlight gloves. These gloves are perfect for Taylor’s play style – they have grippy palms and pads to protect him between the tackles. They’re a pretty cool pair of gloves but very uncommon and tough to find. Only place I was able to find them was on Scheels for $50.

There you have it… the gear worn by the best running backs in the world! Let us know what you think about our report in the comments below!