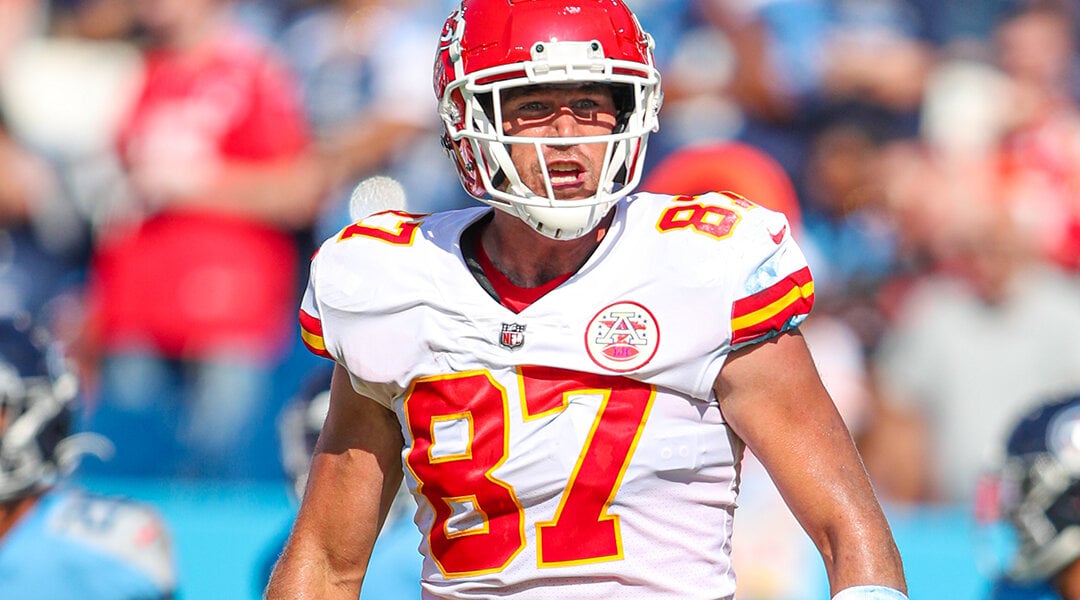 What Do NFL Tight Ends Wear? Here’s the Helmets, Cleats and Gloves Worn by NFL Starting TEs in 2021

For the second straight season, we have researched all 704 NFL Starters to get a full picture of the helmets, cleats and gloves worn by NFL football players. While completing this research is a tall task, it provides us with valuable information about what the world’s best football players wear. We have calculated the brand share and even honed in on some of the specific models these pros are wearing. For this article, we’ll be focusing on some of the most diverse players on the field, the Tight End.

In the NFL, the role of the tight end relies heavily on the teams’ offensive scheme. In some offenses, the tight end acts like a 6th offensive lineman and is blocking defenders every snap. For other offenses, the tight end is a diverse weapon, running routes and catching passes. Most NFL TEs do a little bit of everything and need gear that protects them both in the trenches and in the secondary. Let’s take a look at the most popular helmet brands and models among the league’s best TE’s.

For this season, the most worn helmet brand among NFL starting TEs was Riddell. Twenty-three of the twenty-five TEs wearing Riddell were wearing the Riddell Speedflex. The Speedflex has been the most popular helmet in the game for the last couple years. The ‘flex is the perfect blend of modern styling, top of the line padding, and is rated a perfect 5/5 stars by the VT Helmet rating scale. Also, the helmet is easily identifiable by the hexagon “flex panel” on the front of the helmet. That panel, the shell, and even the facemask flex to absorb contact and protect your head. Some of the league’s most elite tight ends, including George Kittle and Darren Waller, wear the Riddell Speedflex. You can get a Riddell Speedflex for about $470.

The other Riddell helmet, worn by only 2 of the 32 NFL starting TEs, is the Riddell Speed. The Speed used to be the most popular helmet, but was replaced by the newer (and safer), Riddell Speedflex. It’s still a great helmet and worn by veteran TEs, Rob Gronkowski and James O’Shaughnessy. You can get the Riddell Speed for $370.

Coming in at number two, we have Schutt. This past season, we saw 16% of NFL starting TEs wearing Schutt helmets – most of them in the Schutt F7. The F7 is the latest innovation from the folks over at Schutt and is one of the best helmets in the game. It looks stunning, scores a 5/5 on the VT Helmet Rating scale and is one of the lightest options available. The panels you see on the top of the helmet are Schutt’s “Tektonic” plates. These plates work to disperse rotational force – something TEs experience often when making grabs across the middle. This season we saw elite pass catchers, Travis Kelce and Kyle Pitts, in the Schutt F7. You can get the Schutt F7 for $549.

Finally, in 3rd, we have Vicis. Vicis is relatively new to the helmet game (founded in 2013), but they have created some of the safest helmets the world has ever seen. Vicis helmets have next level technology and are the top-ranked helmets from both the NFLPA and the VT Helmet Rating Scale. Despite only 2 starting TEs wearing them this past season (Dawson Knox and Austin Hooper), I expect their usage to increase in the next couple years. Check out Vicis on their site, vicis.com.

As I mentioned earlier, tight end is one of the most diverse positions on the field. These guys need cleats that have both the support of a lineman cleat and lightness of a skill cleat. Most NFL TEs wear a “hybrid” (or big skill) style cleat. These cleats are typically built from a lightweight material, but have plenty of support around the ankle. Let’s take a closer look at the cleat brands and models worn by starting TEs in 2021.

The most popular cleat brand amongst NFL starting tight ends is Nike. This season, we saw 3/4 of NFL starting TEs rocking the swoosh and the most popular cleat was the Nike Alpha Menace Elite 2. The Nike Alpha Menace Elite 2 was built with big skill players, like TEs, in mind. This cleat is mostly constructed from Nike’s flyknit material, which is both lightweight and strong. This cleat has a high ankle cuff and a thick strap for ultimate support. Lastly, this cleat has Nike’s “alpha” traction plate. This plate is wide, stable and has super long studs for ultimate traction. This cleat gives TEs plenty of support when blocking in the trenches, but it’s light enough to fly around too. These are an excellent option for TEs and worn by both George Kittle and TJ Hockenson. Get yourself some Alpha Menace Elite 2s at Dick’s for $115-$200.

The other popular cleat amongst NFL starting TEs is the Nike Vapor Untouchable Pro 3 – worn by 5 players. The Nike Vapor Untouchable Pro 3 is one of the most beloved cleats across all positions. Despite releasing almost 4 years ago, these are still one of the most popular cleats in the game. They offer a fair amount of support, but are more catered towards speed. The carbon fiber traction plate is super stiff and responsive; it sometimes feels as if it’s launching you into your next step. The VUP3 is worn by dynamic playmakers, including Mark Andrews and Mike Gesicki. It can be tough to get these cleats since they are a past model but there are some on stockx.com and eBay. You can get the new Nike Vapors at Dick’s.

It seems that every single year, we see more and more Jordan cleats on the gridiron. This season, we saw 19% of NFL starting TEs wearing Jordan Brand football cleats – a 6% increase from last season. Most of these guys are wearing the general release Jordan 1s and 10s. It turns out these older basketball silhouettes are perfect for tight ends and other “big skill” positions. These cleats have plenty of support, stability and most importantly – swag. Some of the fastest TEs in the game, Kyle Pitts and Darren Waller, are wearing Jordan cleats. If you want a pair of Jordan cleats, we suggest you check StockX and GOAT.

Lastly, we have Adidas, making up 6% of the cleat brand share amongst NFL starting TEs. This season, we only saw a couple of tight ends wearing the Three Stripes – Jimmy Graham and James O’Shaughnessy. Each of them wore the Adidas Freaks. The Adidas Freak line is catered to the big fellas and perfect for TEs. They have plenty of support and a wide, stable traction plate. You can shop the Adidas Freak Carbon from Dicks for $100.

NFL tight ends’ hands take a beating every single snap. Like I’ve mentioned a couple times now, tight ends must be able to both block fearless defenders and catch the football down the seam. These guys need a pair of gloves that can protect their hands, but also have some stick to reel in the football. Most tight ends opt to wear “hybrid” football gloves. These gloves have pads to protect the back of hand and then a sticky palm to make catching the football a little easier. Let’s see what glove brands and models are the most popular amongst NFL starting TEs.

Nike comes in at number one with an astounding 88% of the brand share among NFL starting TEs. Most of these guys are wearing the best “hybrid” football glove in the game, the Nike Superbad 6.0. The SB6 is the ultimate glove for tight ends. It has protective padding all over the back of hand and Nike’s super sticky, magnigrip, palm. These gloves give TEs the protection they need while blocking and then helps them make tough grabs over the middle. These gloves are worn by the best TEs on the planet, Travis Kelce and George Kittle. You can get the Nike Superbad 6.0 for $55 at Dick’s.

Now if guys aren’t rocking the Superbad 6.0, they’re probably still wearing the Superbad 5.0. As you could’ve probably guessed, the SB5 is the older model but still very popular in the NFL. These are very similar to the 6.0 but the back of hand padding has a different design. They still do a great job protecting your hands and help grab the football. Darren Waller and Mark Andrews both wore the Nike Superbad 5.0 this past season. You can find some Nike Superbad 5.0s on Amazon.

In second, with only 6% of the brand share among NFL starting TEs, we have Cutters. We only saw a couple TEs wearing Cutters this season and both were in the Rev Pro 4.0. These are the latest receiver glove from Cutters and have their “C-Tack” palm. Not only are these palms super sticky, they’re also one of the most durable grips on the market. Some of the league’s most dependable TEs, CJ Uzomah and Ryan Griffin, wore Cutters this past season. You can get yourself a pair of Cutters Rev Pro 4.0s from Dicks for $45.

Tied at number 3, we have Adidas. The only starting TE wearing Adidas gloves this season was long-term Adidas athlete, Jimmy Graham. He wore a very early pair of Adidas gloves that I can’t seem to find a retail name for. Check them out here on Ebay.

Finally, with only 3% of the brand share amongst NFL TEs, we have Jordan. Jordan Brand athlete, Kyle Pitts, is the only TE wearing Jordan football gloves. He’s been rocking a pair of Jordan Vapor Jet 6.0s. It’s important to note that Jordan gloves are the exact same as Nike, just with a Jordan logo. As of right now, you can’t get the Jordan Vapor Jet 6.0, but you can get the Nike Vapor Jet 6.0 on DicksSportingGoods.com for $45.

There you have it… the gear worn by the best tight ends in the world! Let us know what you think about our report in the comments below!