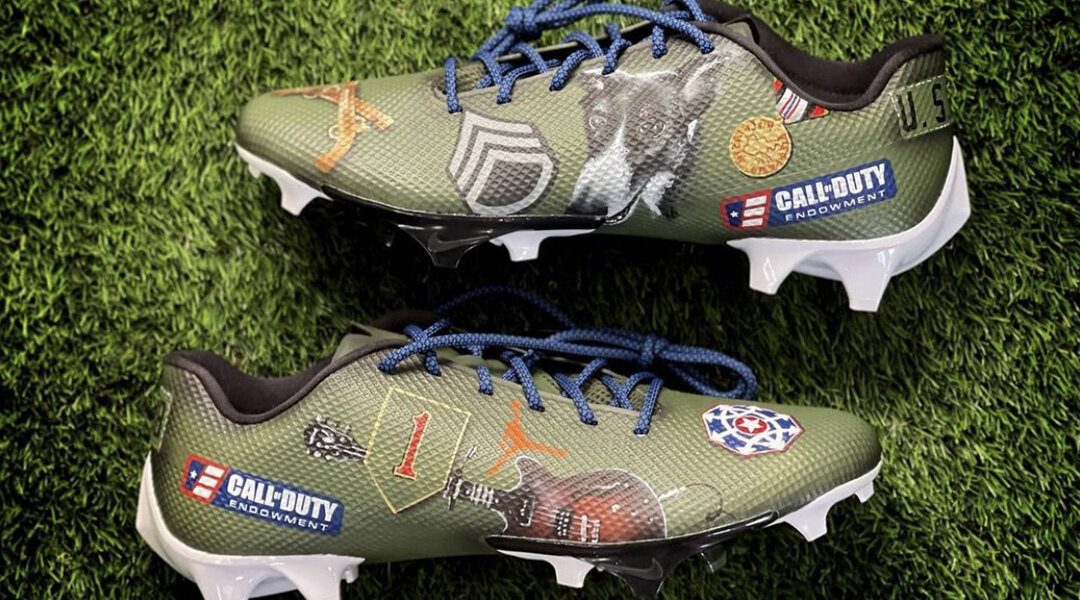 The NFL is usually pretty strict about what players can wear on the field, on gameday. They have tons of uniform policies forcing players to wear their uniform a certain way and wear their accessories in their teams’ colors. But, during weeks 13 and 14 of the NFL season, the NFL celebrates “My Cause, My Cleats,” allowing players to wear custom cleats to support whatever cause they would like. During these weeks we see tons of crazy, colorful cleats all over the field.

This season, the most popular causes are cancer research/support and social justice causes. These cleats are auctioned off to maximize support for these causes. Let’s take a look at some of my personal favorite customs and talk about the artists that brought them to life.

For my cause, my cleats week, Patrick Mahomes has continued to show support for his foundation 15 & The Mahomies. Mahomes established this foundation in 2019 and has dedicated it to improving the lives of children. Mahomes wants kids to “have the same opportunities that I got when I grew up”. The foundation “supports initiatives that focus on health, wellness, communities in need of resources and other charitable causes.” For this year, Mahomes and Adidas decided to use the campaign to highlight his “Read for 15” initiative. This program encourages kids to read for 15 minutes a day for 15 weeks. The cleats are mostly white but have a couple cool details to make them stand out. On the upper, there is several clocks with the hands pointed at the 15-minute mark and “Read for 15” on the inner part of the heel.

For MCMC, George Kittle has continued to support TAPS (Tragedy Assistance Program for Survivors). This program helps provide comfort, care and resources for those grieving the loss of a military loved one. This is Kittle’s 4th season supporting a military program and these are some of the best cleats yet. Kittle’s Nike Alpha Menace Elite 2’s were painted mostly military green with some cool details throughout. On the side of the cleat, you can see the iconic military shark teeth design. The TAPS logo can be seen on the strap of the cleat and Kittle’s #85″ is on the outside of the heel. Kittle had a huge day in these cleats, racking up 9 catches, 181 yards and 2 touchdowns.

For the 2nd straight year, Dak Prescott has chosen to support his foundation, “Faith, Fight, Finish”. The foundation focuses on three main initiatives: cancer research, mental health & suicide prevention, and bridging the gap between law enforcement and the communities they serve. This foundation was initially created as a tribute to Dak’s mom, Peggy, who lost her battle with colon cancer in 2013. This years’ cleat canvas was the Jordan 11 and Dak kept it pretty simple. He added some powerful script to the cleats – “Mom”, “Allow me to be your story”, “Mind Over Matter” and “Your Life Matters”. All of these phrases are clearly important to Dak and his Jordan 11s were amongst some of the best cleats from My Cause, My Cleats week.

For this years’ MCMC, Cordarrelle Patterson decided to support Pregnancy and Infant Loss Awareness. This is a cause close to Cordarrelle because him and his girlfriend lost a baby during their pregnancy. The cleats (painted by @__EliteFeet) were the brightest cleats on the field during week 13. The pink and blue Vapor Untouchables had several cool designs throughout and they really stood out on the field. You can hear more about Patterson’s story below.

For this years’ MCMC, Davante Adams has chosen to support the San Jose Firefighters Burn Association. The organization is 100% volunteer and is dedicated to helping people affected by fire. DA grew up half an hour from San Jose so this is a cause close to home for him. The cleats themselves were some of the flashiest we’ve seen during my cause, my cleats week. The upper on his Jordan 5s mostly silver with some white touches. The San Jose Firefighter Burn Association logo can be seen on the heel and the Jordan logo on the tongue is red to match.

Travis Kelce has once again, decided to support his foundation, 87 & Running for My Cause, My Cleats week. 87 & Running is a foundation that focuses on helping the underserved youth and helps them become productive citizens. For this years’ cleat design, Kelce teamed up with @mache275, once again. This year they brought some serious heat and re-created the iconic pair of Sergei Fedorov Nike hockey skates. Growing up, Kelce was a huge Wayne Gretzky fan and Gretzky wore these skates on the ice. These cleats are not only painted to imitate the Nike skates – they even have hockey laces. They also have the 87 & Running logo on the toebox and Travis’ “TK” logo on the heel. These may be my top pick from this years’ My Cause, My Cleats.

For MCMC, Stefon Diggs has chosen to support Call of Duty Endowment which helps veterans secure high-quality jobs after serving in the military. Stefon Diggs decided to honor some of Army Veteran (and huge Bills fan), Cameron Mabb’s achievements and his personal life on his cleats. The result was a stunning pair of military green cleats with various medals, logos and some of Cameron’s favorite things. The cleats and all the details were hand-painted by @mache275 and came out amazing. Definetly some of the coolest cleats from this years’ My Cause, My Cleats. If you guys want more info on the Call of Duty Endowment foundation and Cameron Mabb, check out the Youtube video below.

For MCMC, Tayloir Heinicke chose to support the Children of Fallen Patriots foundation. This foundation was founded in 2002 and focuses on “serving the families of service members from all branches of the armed forces who have died as a result of combat casualties, military training accidents, service-related illnesses, suicide, as well as other duty-related deaths as ruled by the Department of Veterans Affairs,” according to the organization’s website. Heinicke teamed up with @arts_undefined to showcase this cause and they knocked it out of the park. Heinicke’s Vapor Untouchable Pro 3s were mismatched – one cleat with the US flag and the other painted camouflage. They also had the Fallen Patriots logo on the side and these cleats really stood out on the field. For more info on these cleats and @arts_undefined, check out this video here.

For this years MCMC, Jalen Ramsey chose to support the Safety Corner Foundation. I believe this is a foundation founded by Jalen Ramsey and Derwin James. Jalen and Derwin were teammates at FSU and continue to be really close friends. The Safety Corner foundation focuses on “bringing awareness and help to those in need”. The cleats themselves are insane, to say the least. Once again, Jalen called upon @kotakustoms to bring these cleats to life. Kota is a master at reconstructing cleats and making something totally unique. For these, Kota designed his own super-hero cartoon featuring both Jalen and Derwin. Jalen was illustrated as Black Panther and Derwin was the Hulk. Overall, these are probably the most detailed cleats we’ve seen from the MCMC and also some of the coolest.

For My Cause, My Cleats week, Jalen Ramsey pulled out an absolutely ridiculous pair of Nike Alpha Huaraches re-constructed to look like a pair of the Nike Kobe 6 “Grinch”. These don’t really appear to be very “cause-driven” but the NFL is auctioning them off to support the Dana Farber Cancer Institute. These cleats were custom made by @kotakustoms and way too cool to leave off the list.