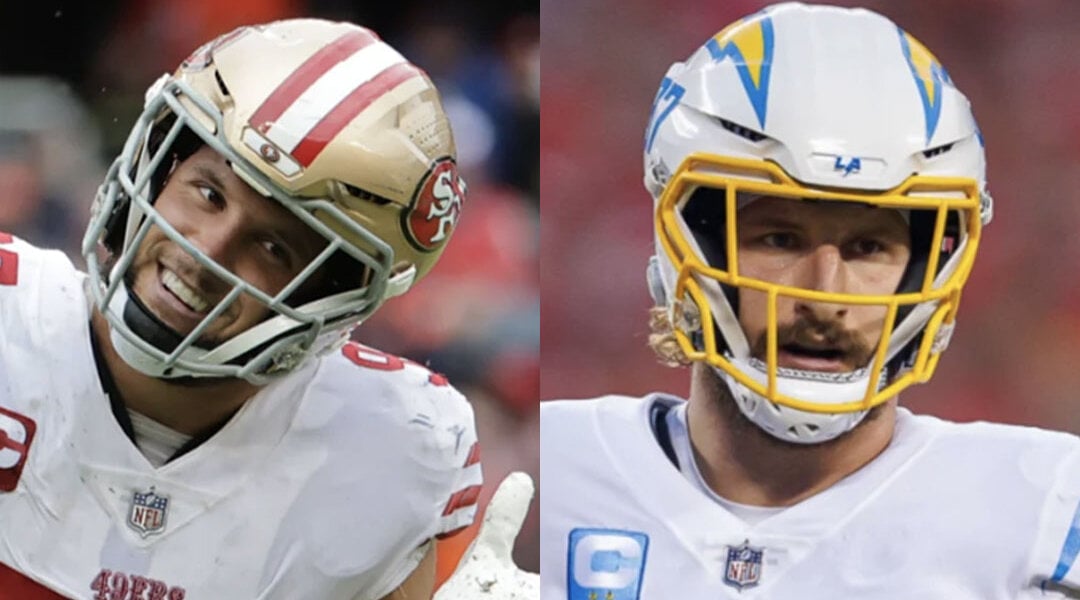 Nick and Joey Bosa have both been sporting a new helmet in 2022 – the Vicis Zero2 Trench. Nick first switched into the Vicis Zero2 Trench during last seasons’ postseason following a concussion and has been wearing it ever since. I’d say it’s fair to assume Nick likes the helmet and told his big brother, Joey, to test it out during training camp and now he’s been wearing it too. So far, the Vicis Zero2 Trench is very uncommon in the NFL but with these star pass-rushers wearing them, maybe we will see the usage increase in the coming years. Also, both Bosa brothers were previously in the Riddell Speedflex helmet.

The Vicis Zero2 Trench is the first position-specific football helmet and built for both offensive and defensive line. To create the Zero2 Trench, Vicis took their super successful Vicis Zero2 and added a front external pad. That extra frontal pad is built for the low velocity impact that lineman face every single snap. This added protection gives the Bosa’s a little extra cushion when clashing against the offensive line.

Since the interior of this helmet is identical to the regualr Zero2, it has Vicis’ 4 layers of protection. First, the super flexible outer shell, the Deformable Outer Shell. This shell responds similar to a car bumper and flexes more than any other helmet available. It absorbs the impact, protecting your head. The next layer is the updated RFLX 2.0. RFLX, carried over from the Vicis 01, is Vicis’ system of pillars that bend to absorb impact and then spring back into place. For the Vicis 2.0, they slightly altered the pillars to lighten the helmet while increasing strength. The next layer is the Reinforced Inner Shell. The inner shell has been engineered through data collected from hundreds of head shapes to optimize fit accuracy, maximize player comfort, and accommodate a wider range of players. The final layer is the DLTA Fit System. These are their pad pods that are completely interchangeable ensuring every player can have a custom-fit feeling helmet.

The Vicis Zero2 Trench is truly the safest helmet in football and tests as the #1 helmet in both the NFLPA’s annual study and the VT Helmet Rating Scale. They might be a little odd looking, but these are truly the future of head protection in the NFL. I think we’ll see more and more lineman gravitate towards these lids, especially with the stamp of approval from the Bosa brothers.