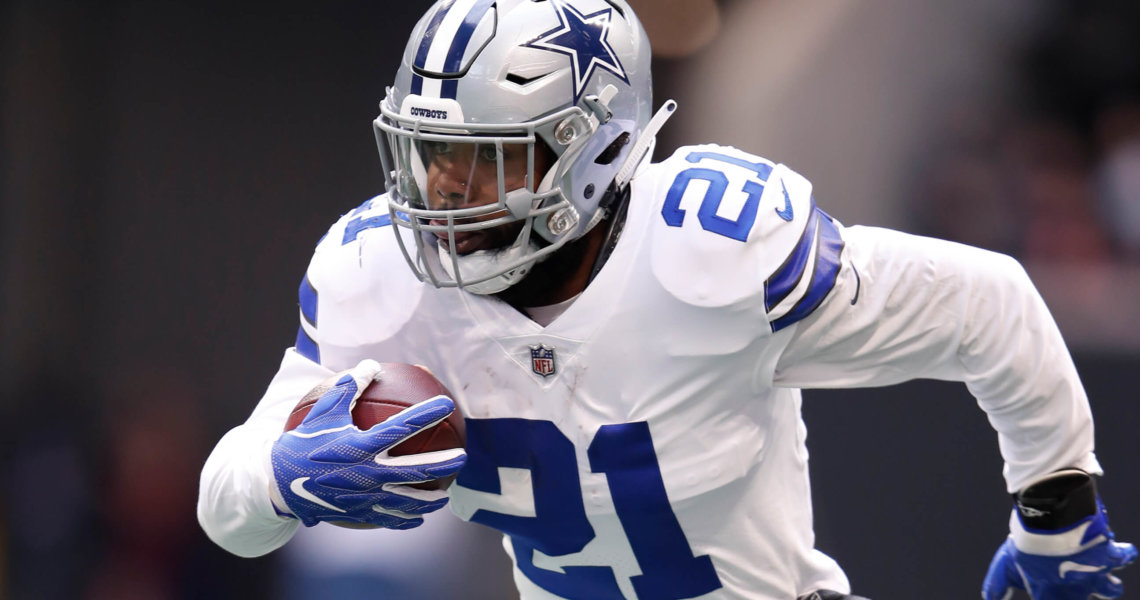 This is the first season we’ve covered football, and while we’ve got some of the top player Lockers added, we also took the time to log the helmets, cleats and gloves of all 715 NFL starters. Crazy, I know. But that’s how we roll. This research provides us with valuable information about what the world’s best football players are wearing on the field. We tracked brands and even lasered in on specific models. In this article, we’ll focus on the running backs, and the helmets, cleats, and gloves that they wear on gamedays.

The running back must be able to take a beating, and so must his gear. The best helmets are going to balance safety with lightweight materials. Riddell owns that category, but companies like Schutt offer equivalent safety with significant weight savings (this can be critical for young players, too). As for cleats, the standout of our running back analysis is the Nike Vapor Untouchable Pro 3, a cleat so good that, despite releasing in 2018, remains the most worn running back cleat in the NFL. Nike is the power player in the glove category, too, though Cutters offers the most durable glove on the market.

Running backs in the NFL are as close to Roman Gladiators as we have today. These super-athletes must put their bodies on the line every single snap, whether they’re expected to block an enormously powerful defensive lineman, or throw themselves headlong into the scrum for that vital 4th and 1. Some of the best running backs ever have had their careers cut short due to injury, and many more suffer from injuries long after their playing days are over. This is why choosing a protective helmet is vital to their success. Let’s see which helmet brands and models that the best running backs on Earth choose to ensure a long and healthy career.

For 2020, 78% of starting NFL RBs are wearing Riddell football helmets, with 21 in the Speedflex. The Speedflex is not only the most popular helmet in the NFL, it’s also one of the safest. As we noted in our quarterback report, the Speedflex scores a perfect 5/5 on the Virginia Tech helmet rating scale and only weighs 4.4 pounds. The precision fit Speedflex is the most popular option for NFL running backs and weighs a little more (4.8 lbs). Three of the most dynamic players in the NFL, Saquon Barkley, Ezekiel Elliott and Christian McCaffrey, all wear the Riddell Speedflex. Get your own Speedflex at Riddell for $425.

Besides the Speedflex, the other Riddell football helmet, worn by four starting NFL running backs, is the Riddell Speed. The Riddell Speed is an ultra-lightweight helmet, weighing in at 3.7 pounds. Its also a 5/5 rated helmet on the Virginia Tech Helmet rating scale. The sleek, streamlined design makes it a player (and fan) favorite. Derrick Henry, Melvin Gordon, Todd Gurley, and Devin Singletary wear the Riddell Speed in 2020. You can get the adult Speed from Riddell for for $340 or a youth Speed for $229.

After Riddell, the (distant) second most popular helmet brand among starting NFL running backs is made by Schutt. Five of the 32 starters are wearing Schutt. The F7, worn by three NFL starting running backs, is Schutt’s newest innovation and, like Riddell’s top helmets, scored a 5/5 on the Virginia Tech helmet rating scale. The F7 features futuristic “Tektonic Plates” on the crown of the helmet that disperse rotational force.

Kenyan Drake, Mark Ingram and 2nd year standout James Robinson are wearing the F7 in 2020. This helmet doesn’t come cheap, but you can shop different models from Schutt ranging from $500-$1000.

Lastly, two of 32 starting NFL running backs are wearing the Xenith Shadow in 2020. The Xenith Shadow is another 5/5 rated football helmet, weighing 4.3 pounds. Xenith’s newest model looks futuristic and is often compared to a lacrosse helmet because of how aero-dynamic it looks. Two of the strongest runners in the game, Nick Chubb and Frank Gore, are wearing the Shadow. You can fully customize and purchase your own from Xenith for $440.

Nike is number one, and its not close. Three out of four starting NFL running backs are wearing The Swoosh in 2020. The most popular cleat is the Nike Vapor Untouchable Pro 3, a cleat that was released in 2018.

Seven of the 24 Nike running backs are still in this cleat because of it’s incredible ankle support and the famous carbon fiber traction plate. The traction plate features diamond studs for quick cuts and the carbon fiber is so springy that it propels you into your next step. One of the greatest cleats Nike has ever produced, many of football’s best runners are still wearing the Untouchable Pro 3.

Some of the best in the game, Christian McCaffrey, Derrick Henry, and Josh Jacobs have been wearing them since their release. The Vapor Untouchable Pro 3 can be tough to find but there are some still kicking around on Ebay and StockX.

Another popular cleat among NFL running backs is Nike’s newest innovation, the Nike Vapor Edge. Worn by “do-it-all” backs like Ezekiel Elliott and Kenyan Drake, the Vapor Edge is incredibly lightweight and features a 2-piece traction plate with edge studs. These “edge studs” are placed at the outermost points on the foot and designed to make your cuts harder and sharper than ever before. There are three models available at Dick’s which are the Speed for $95, the Pro for $120, and the Elites for $200.

If NFL running backs are not wearing Nike, they’re wearing adidas. One in four NFL backs are living the Three Stripe Life. The adidas adiZero has been adidas’ skill cleat for nearly a decade, as they are on their 9th model. The adiZero is known for being the lightest cleat on the market, weighing in at 8.7 ounces (1 cleat, size 8.5). These cleats are comparable to a track spike, insanely lightweight, minimal support, and built for straight line speed. Speedy guys like Aaron Jones, Myles Gaskin, and Chris Carson all wear the adiZero model. You can get the adiZero from FootballAmerica.com for $90 or Dick’s for $100-$120. You can get the higher-cut, more supportive Primeknit version for $150.

Football gloves in 2020 are a must. For running backs, they’re especially important because fumbles are the quickest way to lose your job. So these 32 NFL starters make sure to wear gloves that give maximum grip on gameday. Let’s see what brands and models these dynamic athletes are choosing.

Nike is running the game for football gloves in 2020. Nearly 75% of NFL running backs are choosing Nike football gloves. There are two models that nearly every Nike guy wears, the Vapor Jet and Superbad. The Nike Vapor Jet has been around for over a decade and are one of (if not the) greatest receiver gloves on the market. They fit almost like a 2nd skin, making catching the football feel as natural as possible. Their classic Magnigrip has always been excellent for grip, and on the new Vapor Jet 6.0, that hasn’t changed. The “coefficient of friction has increased 6% from their VJ5,” making them even stickier than past models. Some of the best talent in the NFL, including Joe Mixon, Nick Chubb and Dalvin Cook, are in Vapor Jets.

The other popular glove style among NFL running backs is the Nike Superbad 5.0. It, too, has been around for over a decade, and the Superbad is Nike’s padded receiver glove. This glove features lightweight pads that run along the fingers to protect them. The Superbad features Nike’s Magnigrip palm and is built for players who want elite grip, but also want to protect their hands. These gloves are perfect for downhill runners like Derrick Henry, Saquon Barkley and Ezekiel Elliott. You can purchase the Nike Vapor Jet 6.0s and the Nike Superbad 5.0s from Dick’s.

Next up, the second most popular football gloves among NFL running backs are adidas gloves. Six of 32 are wearing adidas adiZero gloves. This glove is worn by some of the best pass-catching running backs in the NFL. Alvin Kamara, Austin Ekeler, and Chris Carson are wearing the Adizero gloves this year and you can get them at Dick’s for $45 in tons of colorways.

And last but not least, Cutters, the third most popular glove among NFL running backs, has been one of the most dependable brands for nearly twenty years. Three of 32 NFL starting running backs are wearing Cutters this season: Marlon Mack, Frank Gore, and James Connor. Cutters “C-Tack” palm is one of the best grips on the market and is easily the most durable. You can get your own Cutters at Dick’s for anywhere between $20 and $65.

That wraps up our NFL RB 2020 report. Let us know what you think about our report and what you rock on the field in the comments below!