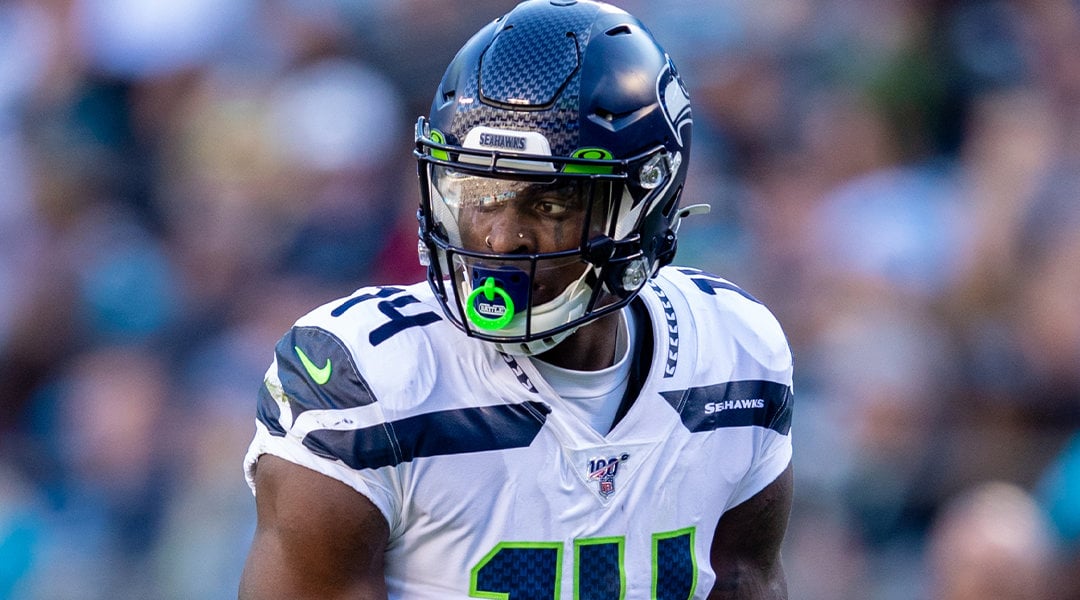 This is the first season we’ve covered football, and while we’ve got some of the top player Lockers added, we also took the time to log the helmets, cleats and gloves of all 715 NFL starters. Crazy, I know. But that’s how we roll. This research provides us with valuable information about what the world’s best football players are wearing on the field. We tracked brands and even lasered in on specific models. In this article, we’ll focus on the wide receivers, and the helmets, cleats, and gloves that they wear on gamedays.

Wide Receivers are the fastest guys on the football field. These insane speedsters can run complex routes, make 1-handed snags, juke you out of your shoes, and some can even bulldoze through you on their way to the endzone. Let’s see what gear NFL Starting Wide Receivers are wearing in 2020.

One of the most dangerous, yet effective, passing plays in football is the crossing route. We’ve all seen it before, a wide receiver crossing the middle and getting absolutely obliterated by a linebacker or a safety. The NFL has made progress to protect the “defenseless receiver” but these hits will always be part of the game. This is why NFL wide receivers wear incredibly high-tech and protective football helmets. Let’s take a look at what helmet brands and models are most common among the 75 starting NFL Wide Receivers.

The most popular helmet brand among starting NFL wide receivers is Schutt. Almost 60% are wearing Schutt and 22 of them are in the Schutt F7. The Schutt F7 is the newest technology from Schutt and features their “Tektonic Plates”. These plates, seen on the top of the helmet, rotate and shift indepently from the rest of the shell, dispersing rotational force.

It’s no surprise WRs are choosing this helmet because they are one of the most susceptible to rotational force when catching passes over the middle. The F7 is also one of the most comfortable helmets available and looks incredible. Also, the F7 scored a perfect 5/5 on the Virginia Helmet rating scale. There are many game-changing wideouts wearing the F7 including Tyreek Hill, Chris Godwin, and DJ Chark. Judging by its usage by NFL’s best, the F7 is a great choice for a wide receiver, available from Schutt in different models ranging from $500-$1,000.

The other popular Schutt model is the Air XP Q10. Worn by superstars like Julio Jones, Davante Adams and Michael Thomas, the Air XP is a classic shell with the most up to date padding. Personally, it’s one of my favorite helmets for a wide receiver because it’s so low-profile and lightweight. You can get one a little bit cheaper than the F7 for $450 on SchuttSports.com.

There is another popular Riddell helmet worn by four NFL Wide Receivers—the Riddell Speed. One the lightest helmets on the market – weighing in at 3.7 pounds, the speed is a classic. It’s sleek, streamlined design makes it a favorite for many. Some of the guys rocking the Speed in 2020 are Keenan Allen, Darius Slayton and TY Hilton. You can get the adult Speed from Riddell for for $340 or a youth Speed for $229.

Lastly, four of 75 starting NFL Wide Receivers are wearing Vicis, more specifically, the Vicis Zero1. The Vicis Zero1 scored a perfect 5/5 on the Virginia Tech helmet rating scale and weighs only 4.4 pounds. Dynamic playmakers, Brandin Cooks, Golden Tate, and Julian Edelman all choose the Vicis Zero1 to protect their head. Vicis is set to drop a brand new helmet, the Vicis Zero2 in January 2021 on Vicis.com.

Football cleats are one of the most important pieces of equipment for a wide receiver. Running routes, juke moves, spin moves all start with the feet and the cleats you are wearing. Wide Receivers fall under the “Skill” category which means the cleats they chose are typically lightweight for that game changing speed and stable enough for the intricate route running and aggressive cuts they need to make. Let’s take a look at what brands and specific models these playmakers are wearing.

The most popular cleat brand among the 75 starting NFL wide receivers is Nike. Nike has been the leader in speed cleats for the greater part of a decade. The most popular cleat among 2020 Nike wideouts is the Vapor Edge 360. The new Vapor cleat from Nike is lighter than past models and features their “Edge” traction plate. The Edge plate is a two-piece plate with “edge studs,” placed at the outermost points on the foot and designed to make your cuts harder and sharper. Nike was able to combine a lightweight cleat with a stable cleat, making it the perfect choice for wide receivers. Some of the league’s most dangerous deep threats, Odell Beckham Jr., Terry McLaurin, and DJ Moore are all rocking the Vapor Edge 360 Pro in 2020. You can purchase the Vapor Edge 360 in three models; the Speed for $95, the Pro for $120, and the Elites for $200.

The second most popular cleat among starting wide receivers is the Nike Vapor Untouchable Pro 3. This Nike Vapor cleat is from 2018 and features a carbon fiber plate with diamond studs for ultimate traction. The Untouchable Pro 3’s traction plate is one of my favorites because of how much “spring” you get from the carbon fiber. These cleats are harder to find these days since they’re no longer being manufactured, but you might find some on Ebay or StockX.

The second most popular cleat brand among NFL wide receivers is Adidas. Nearly one out of four starting NFL Wide Receivers are wearing the Three Stripes and nearly all of them are wearing the adiZero. The adiZero has been the lightest football cleat on the market since they were first introduced a decade ago. This year’s model, the adiZero 9.0 weighs in at just 8.7 ounces (1 cleat, size 8.5). The Adizero is built for running fast in a straight line so it’s no surprise the two fastest players in the NFL, Tyreek Hill and Henry Ruggs, are wearing them. You can get the adiZero from FootballAmerica.com for $90 or Dick’s for $100-$120. You can get the higher-cut, more supportive Primeknit version for $150.

Under Armour | Worn by 8% of NFL Starting Wide Receivers

The third most popular cleat brand among starting NFL wide receivers is Under Armour. Six of 75 starting NFL wide receivers are in UA this season. The Spotlight, their top option, is a lightweight cleat with a woven upper that creates a “sock-like” fit. Dynamic pass catchers like DK Metcalf, Justin Jefferson, and Robby Anderson wear the 2019 model of the Spotlight. You can get the new 2020 UA Spotlight cleat from Dicks for $120 in just about any colorway.

Finally, Jordan brand is worn by five of 75 starting NFL wide receivers. Four of the five guys in Jordans are Jordan Brand athletes, who get all sorts of insane Player Exclusives. Guys like Davante Adams, Mike Thomas, and Sterling Shepard get PE’s with unique traction plates. Unfortunately, they are not for sale but you can get the general release Jordan 10s in both low and high for $125 on Dicks.

When it comes to wide receivers, you almost never see one without a pair of gloves on. Gloves became a must-have in 1981 once Stickum, the sticky adhesive goop used by many NFL players for extra grip, was banned in the NFL. In our research, we observed that all starting NFL receivers wear football gloves, and here are their choices.

The number one glove brand chosen by the 75 starting NFL wide receivers in 2020 is Nike… and it isn’t very close. Nike football gloves are worn by 46 of 75 Wide Receivers and the most popular style is the iconic Vapor Jet. Vapor Jets have been around for over a decade now, and might be the best receiver glove that money can buy. They fit almost like a second skin, making catching the football feel as natural as possible. Their classic Magnigrip has always been one of the “stickiest” available. With their Vapor Jet 6.0, the “coefficient of friction has increased 6% from their VJ5,” making them even stickier than past models. Some of the league’s biggest playmakers, Odell Beckham Jr, Mike Evans, and Stefon Diggs are catching pasees with Vapor Jet gloves. One-handed catches like OBJ won’t come without work but you can get his gloves at Dicks for $45.

Adidas is the second most popular glove brand among starting NFL wide receivers in 2020. Adidas’ most popular glove style, like their cleats, is called the adiZero. About 22% of NFL WRs wear the adiZero. They are lightweight, comfortable, and sticky. Deep threats Henry Ruggs, Marquise Brown, and Darius Slayton wear the adiZero football gloves. Get the latest adiZero Royalty football gloves at Dicks for $45 in tons of colorways

Tied for third most popular among starting NFL wide receivers, Cutters are worn by four of 75 in 2020. The Rev Pro is their most popular style and has their famous “C-Tack” grip. This grip is the most durable in the game. If the grip gets dirty or worn down, throw them in the washing machine, let them air dry, and they are good as new. Cutters have been one of the most dependable gloves for over a decade, so it’s no surprise some of the veterans of the NFL, Julio Jones, Julian Edelman, and TY Hilton, are wearing them. You can get your own Cutters at Dick’s for anywhere between $20 and $65.

Under Armour | Worn by 6% of NFL Starting Wide Receivers

Also tied for third with four of 75 starting NFL wide receivers wearing their gloves, Under Armour offers the Spotlight style, featuring their “Glue Grip.” The Spotlights come out of the package super sticky and stay that way. The “Microthread” on the back of your hand keeps your hands comfortable when wearing them. Two young playmakers, DK Metcalf and Justin Jefferson, both wear the Spotlight. You can get these gloves for $45 at Dicks.

Lastly, with three of 75 NFL wide receivers wearing their gloves, Jordan brand simply slaps the Jumpman on Nike gloves. They are exclusive to Jordan brand athletes such as Davante Adams and Sterling Shepard. You cannot purchase these gloves because they are not made available to the public, but with luck on your side you might be able to find some on Ebay. Expect a high price tag.

The final glove brand, worn by one of the most dangerous playmakers in the NFL, is Grip Boost. Tyreek Hill is the player and he actually owns part of Grip Boost, so it’s no surprise he wears them. They are lightweight and very sticky. You can get some on Amazon for $35-$50.

That’s our complete NFL receiver report. Check out our quarterback and running backs reports, too.