(Low) Altuve is a player that relies on stealth, and his gear reflects that. Lately he’s kept an understated grey/black look throughout his gear, including the Air Huarache Pro Low you see below. These are available at the link. Also pictured is an orange pair that made it to the Hall of Fame, which Altuve wore in a 4th consecutive multi-steal game in June 2014, tying a record set by Cleveland SS Ray Chapman in 1917. (Image: Hall of Fame) 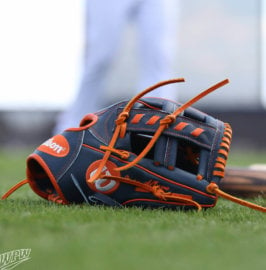