Beltre, Elvis, Prince and the Gear of the 2015 Texas Rangers The Rangers opened the 2015 season in Oakland, and WPW scored our first ever regular season on-field assignment.  Aside from the sheer entertainment value of watching Adrian Beltre, Elvis Andrus, and Prince Fielder play pepper pre-game, we had a great time and got some of our best looks ever at the gear we covet.  Now we’ll take an in-depth look at the gear of the 2015 Texas Rangers.

Rougned Odor’s training glove is a Wilson Custom clinic.  Its a risky proposition to go with 3 colors but he managed to make an outrageously colorful glove look good.  Any more than 3 colors and I think it’d be a mess.

Shin-Soo Choo’s custom Nike MVP Elite Pro batting gloves in red/blue were our favorites on the Rangers and his Nike MVP Pro cleats are oldies but goodies.

Prince Fielder’s Rawlings Heart of the Hide PROFM20XLKB Single Post 1B Mitt is a larger version of Adrian Gonzalez’ 12.25″ PROFM20KB.  Here’s some more info on it: Versus RHP Jesse Hahn, Prince used the same bat from BP, the AB29 with a black Lizard Skin Grip. Later in the game, versus LHP Eric O’Flaherty, we saw Fielder come to bat with a Tucci TL-271 Maple with no Lizard Skin.  I think the pitcher’s handedness played a part. Adrian Beltre swung the same Marucci AB29 that Fielder swung vs Hahn (Prince is standing left and Beltre right, with the same model).

For pre-game, Prince Fielder was rocking the Nike Air Veer Premium Safari (above left) and Beltre the Nike Lunarglide 5 with animal print.  Shin-Soo Choo wore the Nike Air Pegasus+ 30 in grey/red/blue.  (Thanks to Ben for the ID help.)

Leonys Martin’s custom SSK with the “Star V-Net” web doesn’t seem to be available through the custom builder.

Adrian Beltre’s glove has remain unchanged since WPW’s initial research on him, the Rawlings Heart of the Hide PRONP5TLB.  Here’s some more info on it from Rawlings HQ: Elvis Andrus was the coldest guy in the building that night, but he barely let his Wilson A2000 X2 BP glove out of his sight.  He never put it down until it was time to hit.

His Nike MVP Elite Pro 2 batting gloves are fire and we also saw a red/white/blue pair of Nike Show-x2 sunglasses that look available.

Also pictured: a couple more looks at the Chandler CC13 (Rougned Odor’s) that Andrus is swinging.

Along with Andrus, Beltre is wearing some snakeskin Huarache Pro cleats, but in a different colorway.  Both are wearing MCS (plastic). 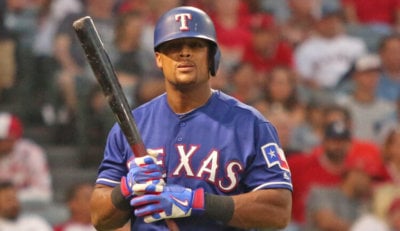 WPW Asks the Pros: Rawlings Heart of the Hide vs. Pro Preferred