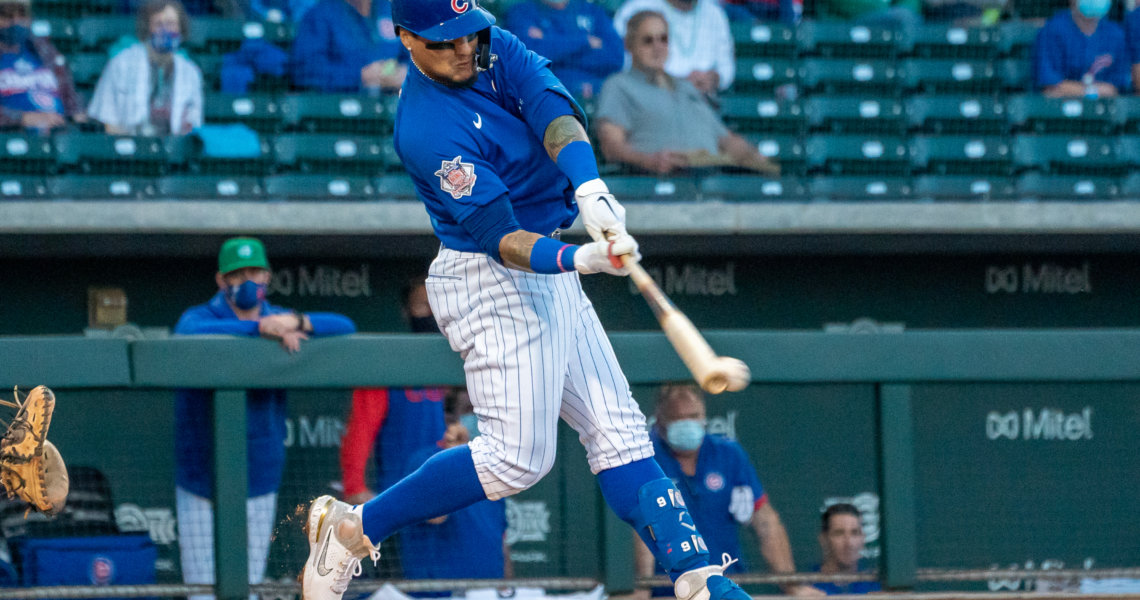 Last week we had a feature on the notable South Siders, and this Opening Week we’ll take a look at the Cubbies.

Javy Baez, in his sparkling Huarache Elites (some low cuts available at Nike.com), enters 2021 looking to standout among the top shortstops in baseball.

In most years, he’d already be that even despite an abysmal offensive COVID season, but the list of great shortstops is as long as ever: Tatis, Story, Lindor, Turner, Bogaerts, Seager, Correa, Bichette, Tim Anderson, just to name a few.

Despite the SSK USA brand going completely dark over the last few months, including a dead website, newly minted Gold Glover Javy “El Mago” Baez is still rocking with the Japanese brand. Your best bet for SSK gloves is going to be eBay or SidelineSwap.

The Kris Bryant-Chicago honeymoon phase is over just a few short years after he played a major part in breaking the curse of all sports curses. In my view, he’s still one of the best players in the game and will be the Cubs MVP in 2021. If the Cubs trade him or let him walk after this year, they’ll be trading a legacy player on the level of Betts-Boston… a cryin’ shame.

By the looks of his standard issue cleats, it looks like adidas may have forgotten about Kris, too? Or maybe he’s just waiting for Opening Day to debut the PEs. Either way, the adiZeros are a great-looking cleat and available at Eastbay in this exact colorway. Its notable that these are not usually the style Kris prefers—he usually wears the Icons.

The adiZero batting gloves worn by Bryant and so many adidas guys are available at Baseball Express for $35 in many colorways.

Anthony Rizzo put dachshunds in hot dog buns on his player exclusive Huaraches. It feels like something the legendary Harry Caray would have appreciated.

Rizzo continues his long-lasting streak of fire BG’s. These are the Nike Huaraches available at Eastbay for $15-$60.

Anthony Rizzo remains the only first baseman on Planet Earth with platinum labels on his first base mitt. He’s also got the Pro Mesh, not common for 1B’s either. Rizzo’s “game model” with platinum trim is available for $360 at Rawlings.com.

The list of swaggy players in Chicago goes on, and Willson Contreras is arguably the swaggiest catcher not named Yadi.

While we’ve documented his move to Rawlings, the rest of his gear is airtight. In a recent Instagram post, Willson asked for fans to weigh in on which cleats he should open up 2021 with:

Another PE king, Joc Pederson left the Dodgers but managed to keep the red/white/blue colorways and the Alpha Huarache Elite 2 (available at Eastbay for $90). The home version is a big win for me, but I’m not a fan of the aways:

In my opinion, red and blue need a third color (white) to not clash with each other.

The Cubs best second baseman, Nico Hoerner, will not break camp with the team—obviously to delay free agency by the Cubs—but Nico will be the Cubs 2B soon enough.

The purists love Nico’s blonde/walnut Wilson A2000 1786, available at Wilson.com exactly like Nico’s for $380. This glove was featured on our top 5 2B gloves recently.

My favorite part about watching Nico play was how hard he was busting his ass down the line on every play. The difference between .250 and .300 in the Big Leagues is one hit a week, and I am always so disappointed to see hitters dog it on a slow roller to the infield for an easy out. You’re a professional athlete and you can’t be bothered to sprint 90 feet four or five times a night? Nico doesn’t believe in that garbage and neither should you.

…and the always clean Jason Heyward in the Huarache Mids. Customize at Nike.com for a similar look.