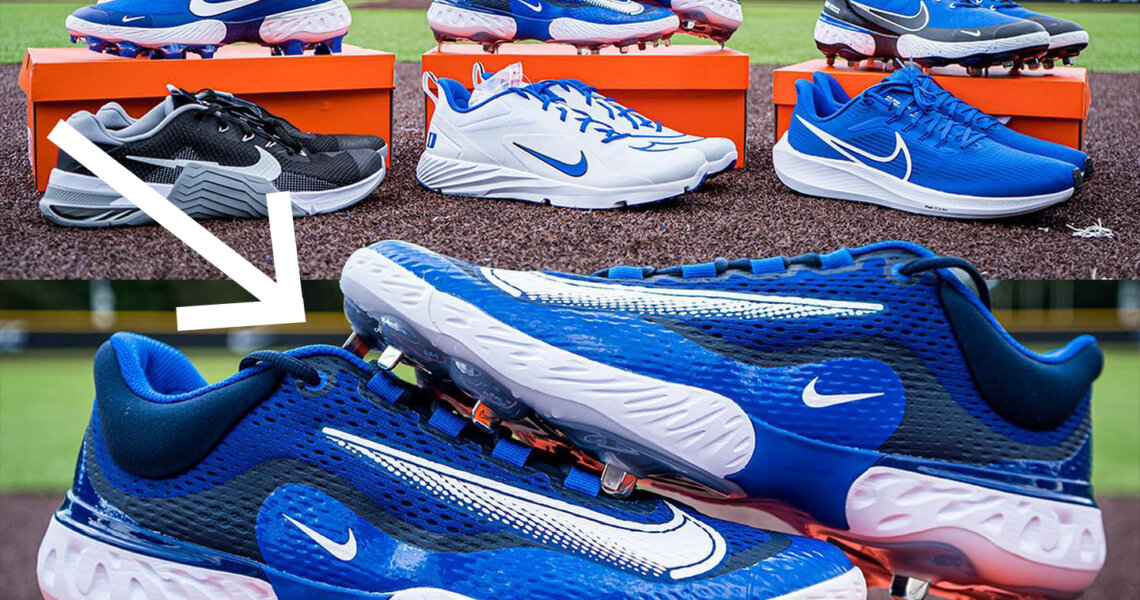 @dukebase gave us a long-awaited look at the new Nike Alpha Huarache Elite 4 cleats on Tuesday.

Its the first new cleat from Nike since the Trout 7 dropped in February 2021, which you can see at the bottom of the above photo. Nike confirmed to WPW that these are the Alpha Huarache Elite 4, though they did not specify a release date. They did say, however, that it will be a “busy stretch for new model releases from us in the next 4-6 weeks.” So you can probably expect them within that timeframe.

In a quick look, the low 4s aren’t much different from the 3s, and functionally-speaking, maybe that’s a good thing; the Huarache 3’s remain the most popular cleat in baseball.

The defining characteristics of the 3s, the React midsole and 2-piece (forefoot and heel) plate have been carried over.

Maybe the biggest differences to my eye are the mesh upper with large perforations and the bulked up ankle padding.

While social media comments are all but guaranteed to slant negative, the reception hasn’t been great so far. @brendancoulson12 echoed similar comments when he said, “It’s basically the same thing,” while @goldengatecollector said “They look much cooler than the 3s…”

Custom cleat artists collectively groaned about the mesh, like @luciafootwearco who said, “Not gonna be fun to customize with that layout or those materials,” though its unlikely that customizers factor into Nike Baseball’s design plans.

While Duke showed off the lows, the mid version of the new Huarache 4 cleat has also leaked on Hibbett’s website:

The mids are similarly, uh, similar to the previous iteration. In an update, the inner “DRAGON” toe that prevents rips has a pattern reminiscent of elephant print, and gives even the stock blacks a touch of swag.

Here’s what Hibbetts’ page says about them:

We’ll update as soon as we have more on this new release, which we can expect in 4-6 weeks, according to Nike.

What are your thoughts on the new Alpha Huarache Elite 4 cleats? Weigh in below.