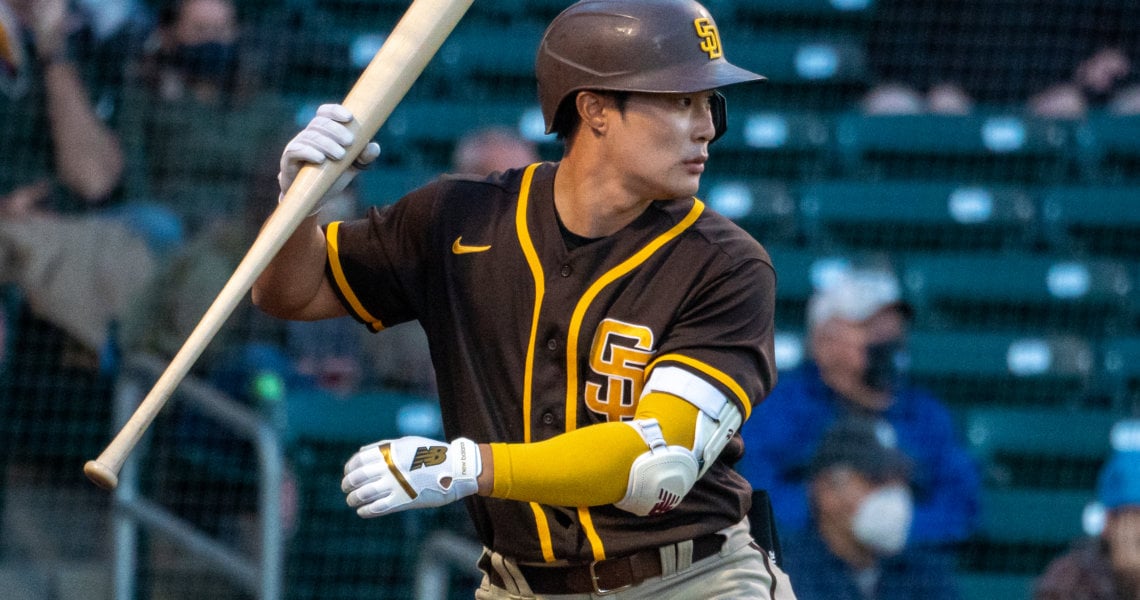 I spent a few days down in Arizona last week, catching some of the swaggiest teams: the Padres, Dodgers, White Sox, Cubs, Angels and Brewers. This is my seventh (!) Spring Training with WPW, so for a hardened swag hunter, it takes a lot to stand out.

One of those standouts in 2021 is Ha-Seong Kim, formerly of the Kiwoom Heroes, now with the San Diego Padres. He drove in 100 three of the last four seasons in South Korea while stealing 80 bags. The Padres liked what they saw to the tune of $28 mill over 4 years.

Kim caught my eye on this play, where he fielded a slow roller by White Sox Nick Madrigal. After he made the play, I noticed his sunglasses were on the wrong sides of his ears (you can see it in the photo with Manny, too). Its subtle, but these are the things you notice when you make a living hunting all corners of the earth for Baseball Swag. When Kim made no attempt to fix them for the remainder of the inning, either he was legitimately wearing them like that on purpose, or hadn’t even noticed, and at that point you know he’s just different.

So I started paying more attention to Ha-Seong, and I found out that no, that’s not how he wears them—he put them on “correctly” later—but if he doesn’t wear them like that, then imagine how laser-focused you have to be to leave sunglasses wrapped over your ears? I’ve never been that focused on anything in my life. Either way, it jumped out at me and I paid closer attention as the game went on.

Ha-Seong Kim’s weapons of choice stood out as much as his play, including his World Pegasus glove (shoutout to the WPW IG community for being all over that). World Pegasus is a Japanese company and you can find some gloves made by them on eBay. The yellow sleeve is money, too.

Kim’s World Pegasus glove is unique for its brand and pattern. It strikes me as a large, open glove for an infielder and the web looks huge with the wide open modified trap.

I also recognized the brand of inner glove (the red & white glove worn under the glove).

Its from Gloveworks, and is on sale there.

Kim also had some New Balance swag we’ve not seen before, including a custom pair of the 3000v5 (Dick’s Sporting Goods for $100-$120) on which the customizer removed the inside “N” logo to paint on Kim’s number. That seems like a contractual no-no, but as we’ve already seen with the sunglasses, Ha-Seong Kim does not play by the rules.

And yet, NB still loves him so much that they made him the first ever MLB player to wear their batting gloves and elbow guard. As noted by our shrewd IG community, NB sponsorships like this are more common in Korea, and the guard looks like a Belgard guard that’s been re-branded.

Kim also wore an NB branded Belgard leg guard, and swung a Marucci CB15 Maple (Baseball Express, $150). While Lindor is New Balance Baseball’s top dog in the US, it’ll be interesting to see if NB has some fun with Kim, too, since he’s clearly an international impact player.

If I wasn’t already blown away by Ha-Seong Kim, he got on first base and pulled not one, but two Benik oven mitts out of his back pocket and put them both on—I laughed at first, but then I started to think… If you’re an oven mitt guy, that means two things: one, you’re fast, and two, you’re a head first slider.

Most guys wear them on the left hand so they can reach for the outfield side of 2B, but what if the throw is wide/high toward right field, and you need to slide to the inside of the bag (not at all uncommon)? Kim has this figured out by wearing two oven mitts. He can slide towards either side of the bag with reckless abandon. Boss level.

As he was stealing, Kim’s helmet started off his head and he eventually whacked it off, and while he was thrown out, his swag was fully intact. That gave him the opportunity to get his flow off in front of the socially distant packed house. Just as I was admiring the cut, I nearly went blind from the #7 medallion on his neck.

Its the kind of piece that would make even Deion Sanders blush and on a **well-proportioned yet sufficiently gaudy** gold rope. With baseball players’ long-standing affinity for shiny round things, this piece is turning heads in the Padres clubhouse, no doubt about it. If this is what the KBO is capable of, we need more. Keep an eye out for this dude when the season starts!

P.S. If you’re wondering what I mean when I say a “well-proportioned yet sufficiently gaudy gold rope,” I direct your attention to a potential violator:

Orlando Arcia, an incredibly swaggy player that will be covered in an upcoming post, may cross the “well-proportioned” line with the ancient golden jungle vines he has around his neck. With bling of this magnitude on a relatively wiry player, Arcia’s gold-to-flesh ratio is likely the highest in the league. You start to wonder, with this much weight in gold around one’s neck, at what point does it slow him down? What is the net loss in range factor?

These are the important questions of our time. Please add yours in the comments.