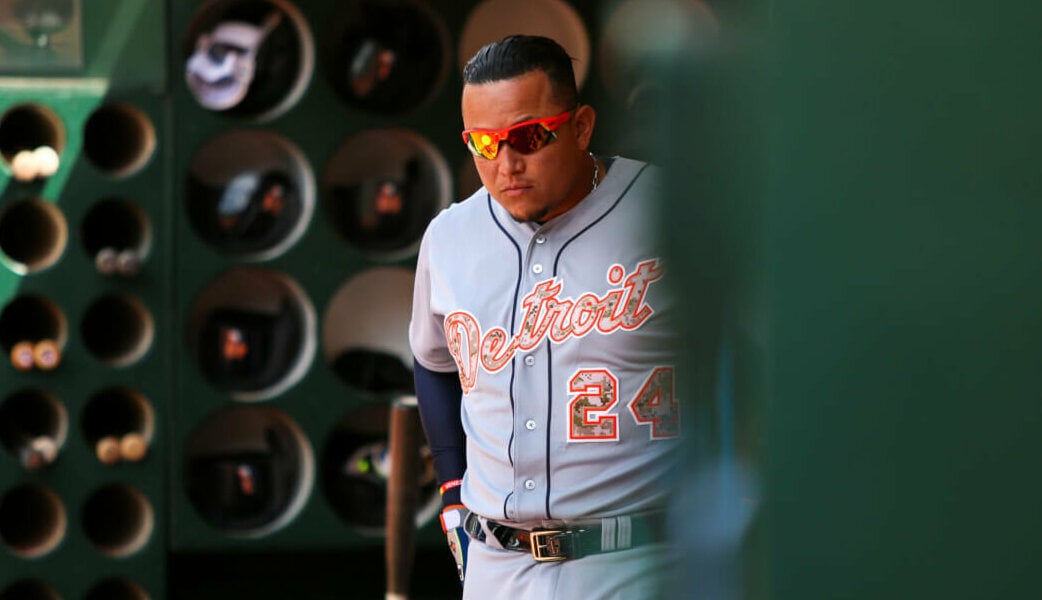 The great Miguel Cabrera is standing on the doorstep of baseball’s most elite club. Besides the 32 all-time greats he’ll join in the 3,000 Hit Club, Miggy will take his place alongside two baseball kings, Hank Aaron and Willie Mays, in the .300 Lifetime/3,000 Hit/500 Homer Club.

The .300/3000/500 club is so exclusive that Babe Ruth can’t even claim membership, though Ted Williams would have the credentials if not for his service in World War II. Pair that triple threat with his 2012 Triple Crown, and Miggy stands alone in baseball history.

Miggy’s mammoth strength and composed hitting approach is now in its 20th season, and even back in 2003, his rookie year, he swung the same bat brand, Sam Bat.

The MC1 is endloaded, and according to Sam Bat, the barrel is fairly short and “all comes right at the end.” The barrel diameter is 2.54″ inches and Miggy employs Sam Bat’s “no cup” option (on the right of the above photo).

Miggy’s batting gloves have been almost as consistent, wearing the Franklin CFX Pro ($50 custom / $35 stock) since 2011.

In 2022 we saw him in a Tigers colorway of the CFX Pro batting gloves that you can mimic through Franklin’s custom builder.

Miggy’s cleats have always varied, and while his career began in black and white Nikes, he added more color in 2015 with New Balance and their original 2000.

There was even a brief moment in 2016 when Miggy wore a never-released cleat from TRUsox, a company known for its no-slip socks. Miggy told us that he was part-owner in the company and that they’d release “if the people like them.”

Unfortunately, it never happened, and these TRUsox player editions never saw the light of day. This is actually the first time we’ve ever shown these images that Miggy sent us. The bottom ones, designed for Father’s Day, would have been sick. His TRUsox cleats disappeared not long after this conversation.

Later, he switched into Jordan brand cleats (at least when he felt like it). On Mother’s Day 2017, he wore these Jordan 12s to celebrate his wife Rosangel and mother Golla.

Miggy has always been a fan of shades, even while hitting, during day games.

He’s always preferred the classic baseball sunglasses, the Oakley Radar. Dick’s Sporting Goods has an awesome selection of this baseball favorite for $162-$242.

Maybe the best part of Miggy’s game is that he’s always having a good time. Here he is blaming Salvy for calling a late timeout in the batter’s box.

He’ll talk a little smack, too.

Shoutout to Miggy on achieving baseball immortality. He’s been a pleasure to watch play our game.