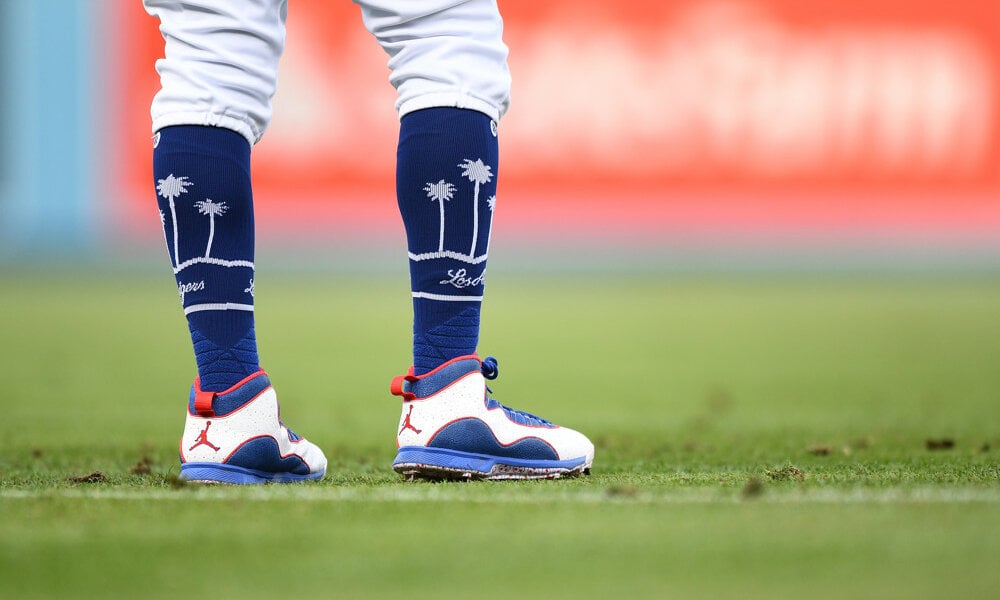 The unpredictability of baseball continues to amaze me. You almost never see it coming, but then again, how could we have missed it? Kyle Schwarber. Kike Hernandez. Joc Pederson. These guys shouldn’t be surprising us—they’ve done this before. The Astros have a modern day Murderer’s Row, trashcans be damned. Braves are knocking on the door every year, and they’re the biggest “surprise” of all.

As for the gear, there’s been some surprises as well as some expected heat. Here is what’s stood out in our 2021 MLB Postseason.

Centerfield defense hasn’t been a glowing feature of the playoffs, but Kike Hernandez has been exemplary in that role while hitting the stuffing out of the ball every night. His diving catch to rob Michael Brantley of a two-out, bases loaded single saved the Red Sox in Game 1 of the ALCS and showcased Kike’s outrageous athleticism and zest for life. His relay throw to get Aaron Judge in the Wildcard put the nail in the 2021 Yankees’ coffin.

Alex Verdugo reps Mexico so hard and it works so well with the Red Sox unis. The Jordan 1s are great, but check out the 44Pro leg guard with the Mexican flag on it. So saucy.

Shocker: Mookie Betts and Cody Bellinger are winning games in the postseason again. After a quiet-ish year, Mookie and Cody are once again making the difference for the Dodgers.

Mookie’s Jordan 10/Stance combo is just as deadly as his swing. The J’s are player exclusive but you can get the socks for $24 (until they’re sold out again).

Mookie has worn these snakeskin greys for away games.

Cody is a little more casual with it but still effective. (Also notice Corey Seager in adidas….more on that soon.)

Must be nice to have Albert Pujols off the bench, eh? Pujols’ cleats haven’t changed in about 8 or 9 seasons; always a favorite and a throwback to Mike Trout’s first player exclusive. On that Trout cleat, according to What Pros Wear in 2014:

“Nike and Trout blended the MVP Pro, the Diamond Elite Fly (diamond-shaped mesh), the Swingman MVP (heel), and a Huarache-style toe into one of the lightest (at less than 12 ounces) and most lethal cleats in the game today.”

A post shared by What Pros Wear ⚾️🏀🏈 (@whatproswear)

While the Brewers didn’t move on, its not for lack of stylin’. Exhibit A: Eduardo Escobar’s custom Jordan 12 cleats, colorized by Stadium Custom Kicks.

Lance McCullers’ dominant Division Series was highlighted by his Nike glove, a player exclusive that Lance designed in honor of his late friend and great Marlins pitcher, Jose Fernandez.

At the ripe age of 72, Dusty Baker is still one of the hottest topics on WPW this postseason because of his portrait wristband. Dusty is actually the one who put Mimsbandz, the portrait wristband, on the map back in the 80s.

Pictured above is the first Mimsband patch ever, featuring Dusty Baker as an Oakland A in the mid-80s. (Courtesy of @mimsbandz) Dusty still rocks them along with a pair of surgical gloves and about 45 more wristbands.

With MLB social media really pushing the pre-game outfits, some players have been slow to react. Not Carlos Correa. Guy is cleaner than Mr. Clean. His DIOR AND KENNY SCHARF ZIPPED JACKET is the standout here, available for the low, low price of $3200 at Dior.com.

The first WPW-documented emoji chain is worn by Jose Siri, playing CF for the Astros.

We first noticed the new catcher’s mitt that Yadier Molina has been rocking in the Wildcard game, but it looks like he’d been wearing it during the regular season, too. The belief among some catchers is that black leather is the only way to go, because it tends to be stronger/stiffer than other colors. Yadi seemed to subscribe to that theory until now. All the leather on this glove is red. If you trust Yadi, you can get the same catcher’s mitt for $380 at Rawlings.com… it won’t have the Gold labels, though.