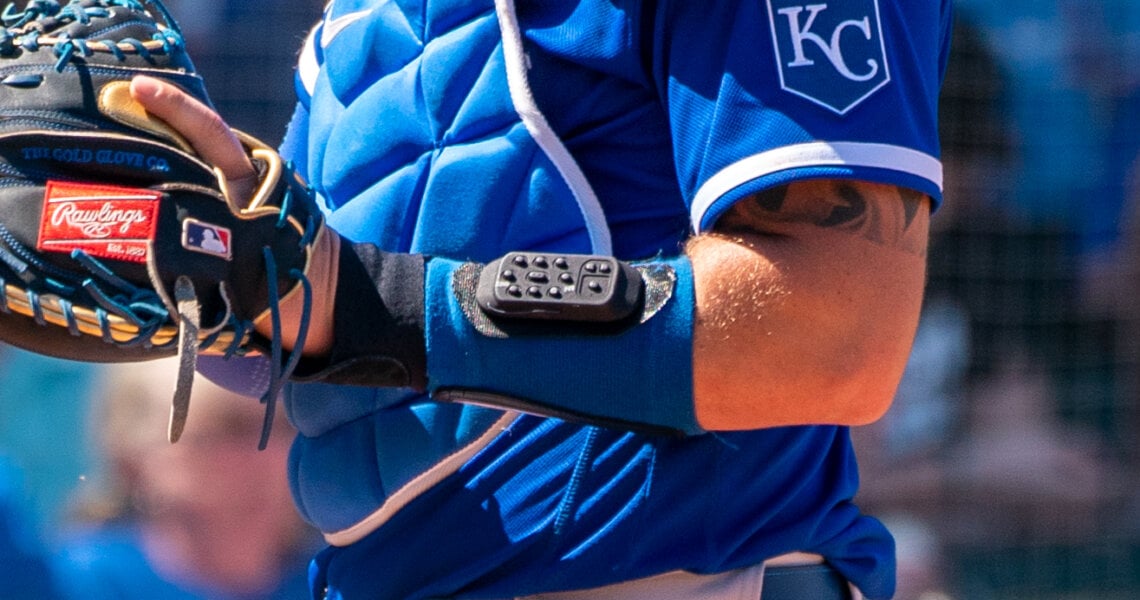 Spring Training 2022 has been a proving ground for a new encrypted pitch-calling device called PitchCom, a black remote control affixed to the catcher’s wrist that gives him the ability to relay signs to his pitcher and team covertly.  While the devices are only available to MLB teams right now, the website says that they’ll be more widely available to amateur teams in 2023.

I first witnessed the PitchCom device in action on March 27th at Sloan Park in Mesa, Arizona. It was worn by Royals catcher Cam Gallagher on his glove-side wrist.  Gallagher quickly glanced down at his wrist, pressed a button, and the pitch call was beamed to his pitcher’s ear in a man’s voice.

Gallagher didn’t like it at first and felt it was disrupting the pitcher’s rhythm, but after some experience with it, he’s grown to like it. He likes that he’s getting the pitch in before the pitcher even toes the rubber.

Rays pitcher Phoenix Sanders said its like “Alexa just tells you what pitch to throw.” He sounded like a big fan and said it was very easy to use, “no hiccups.”

Mike Zunino of the Rays, who used the PitchCom device as Sanders’ batterymate, believes its a time-saver, music to MLB’s ears considering the now common opinion that games are taking too long. “It’s something that’s really going to get the game moving, I think,” Zunino said.

Even fielders can wear it, and fielders have a lot to gain from knowing the exact pitch-call, especially in their positioning.

The strategic benefit is obvious, but I’m very intrigued by Zunino’s expectation that it’ll reduce game length. When you add up all the extra time needed to shake off, call timeout, and make mound visits for the purpose of pitch-calling, it really adds up. To eliminate that idle time will make the game flow smoother. On the other hand, purists will not like it. They’ll say that sign-stealing and sign-protecting have been part of baseball for 150 years and it should stay that way. Unfortunately, sign-stealing is no longer just an on-field activity, and so the purity of this part of baseball is gone anyways.

What do you think? Will PitchCom catch on in the Big Leagues?