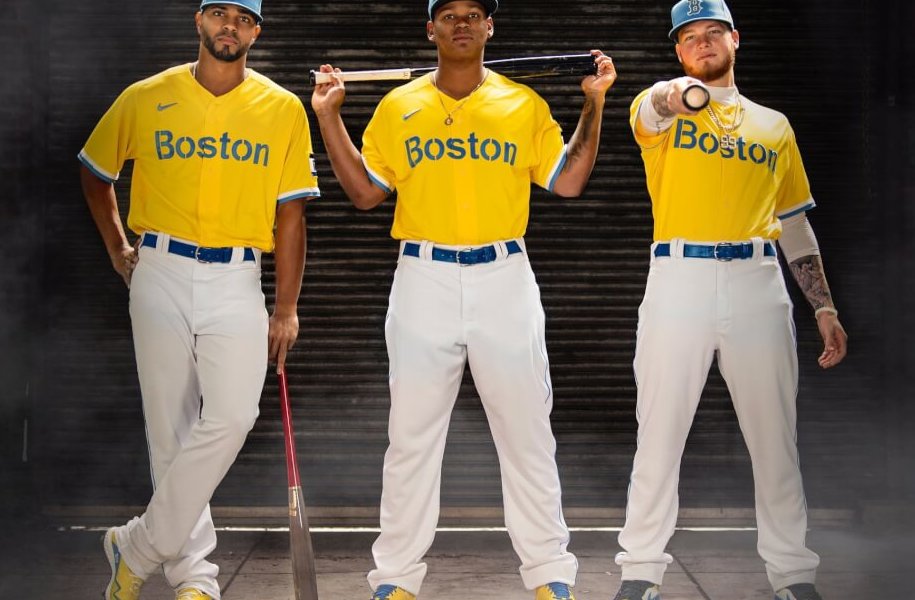 Today, on April 6, Nike and the Boston Red Sox unveiled a new powder-blue-and-yellow alternate uniform inspired by Patriots’ Day and the Boston Marathon. When Nike assumed responsibility as MLB’s uniform supplier in 2020, many expected them to push the envelope. The new City Connect Series is the company’s first foray into that sphere, with six other teams – the Arizona Diamondbacks, Chicago Cubs, Chicago White Sox, Los Angeles Dodgers, Miami Marlins, and San Francisco Giants – set to unveil their own designs as the season progresses.

The Red Sox’s new alternate is a striking departure from their traditional home whites. They take inspiration from the Boston Marathon finish line, with a sleeve patch featuring “617” (the area code for Fenway) designed to look like a racing bib. The Red Sox will first wear the jerseys on April 17 and 18 against the White Sox.

The City Connect concept looks to mirror that of the NBA’s City Edition jerseys, employing distinct designs and vibrant colors to capture an element of each city’s culture or history. The cynical part of me sees this as just another way to boost jersey sales, but the gear-head part of me fully embraces it and is excited to see what each team comes up with.

Overall, I appreciate the Boston Marathon concept and how it was executed, but I would not say I absolutely love the jersey, nor do I hate it. The design elements work well together, I’m just not taken either way with the yellow. If anything, the hat reminds of the ones UCLA used to wear, back when they had Trevor Bauer and Gerrit Cole. The response in the What Pros Wear Instagram comments section has been fairly polarizing, with most embracing the concept.

A post shared by What Pros Wear ⚾️🏀🏈 (@whatproswear)

Baseball is a sport defined by traditionalism; while the City Connect Series may ruffle the feathers of purists, it should also inject energy into the game. Though some teams’ creative departments are not as talented as others and we will likely see some duds, MLB’s attempts to push culture forward should be celebrated. For that, these new Red Sox jerseys are a success.

Here’s when you can expect to see the next unveilings: