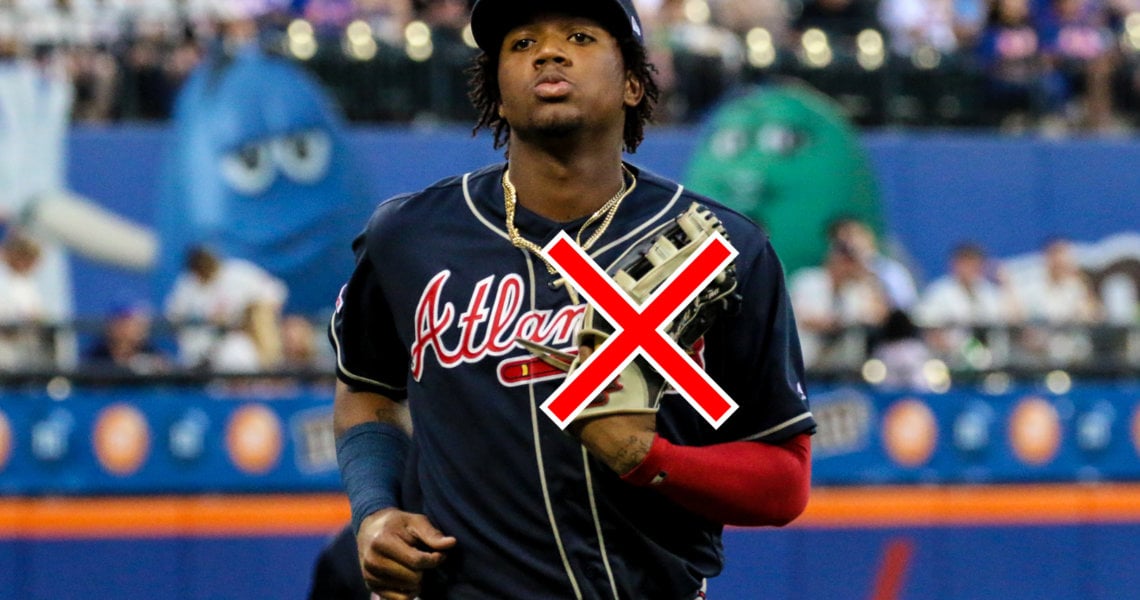 Ronald Acuña Jr. has recently switched to a Rawlings glove, and the circumstances surrounding Acuña Jr.’s glove switch have created some controversy amongst the WPW readership.  Before you form your opinion, lets break it down.

Acuña Jr. switched immediately after a dropped home run robbery versus the Phillies on September 10th.

Some chatter in the comments that Acuña benched his SSK in favor of a @rawlingssg after this play… What do you think?

As you can see, its a loaded situation. Emotions high in a tie game against a division rival.  Phillies Kingery takes a bite out of a cookie from Max Fried.  Back, back, back…

Acuña Jr. drifts, changes direction, times his jump to the millisecond, and clearly makes a jaw-dropping home run robbery IN THE WEB of his black and white SSK.  Still in the web, Acuña Jr. brings it back emphatically, so sure and proud of his catch that he thrusts his arm behind him and roars with adrenaline. Finally, the weight of the ball and the thrust of his arm overpower the stiffness of the leather, and the ball slides out.  Acuña Jr. thinks its a catch and gestures to the umpires that it was a catch.  While Acuña pleads, Kingery motors.  The hesitation allows Kingery to turn it into an inside-the-parker for a decisive run in a game that the Phillies would win 6-5.

What Glove was Ronald Acuña Jr. Wearing When He Dropped the Ball? 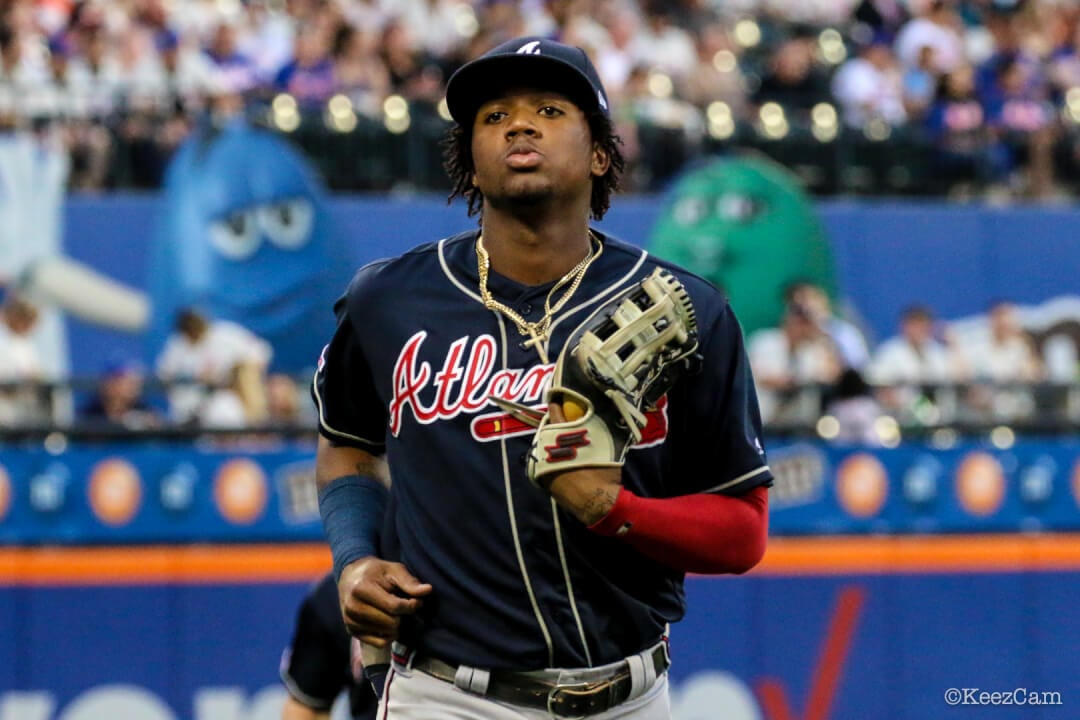 Acuña Jr. was wearing an SSK H-Web glove in grey and black.  It seems recently broken in, though he’d been wearing it most of the year, and it shows a flared thumb and pinky.  The flared look is seen a lot in the MLB among both infielders and outfielders.  The idea is to create a wider opening for baseballs to enter. 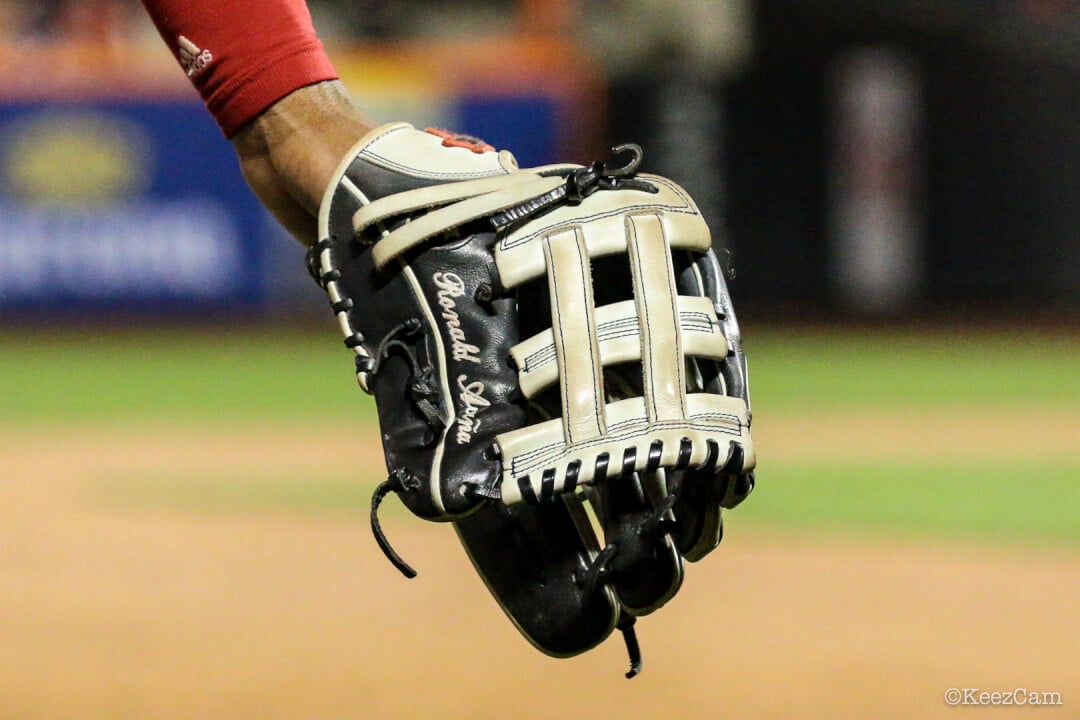 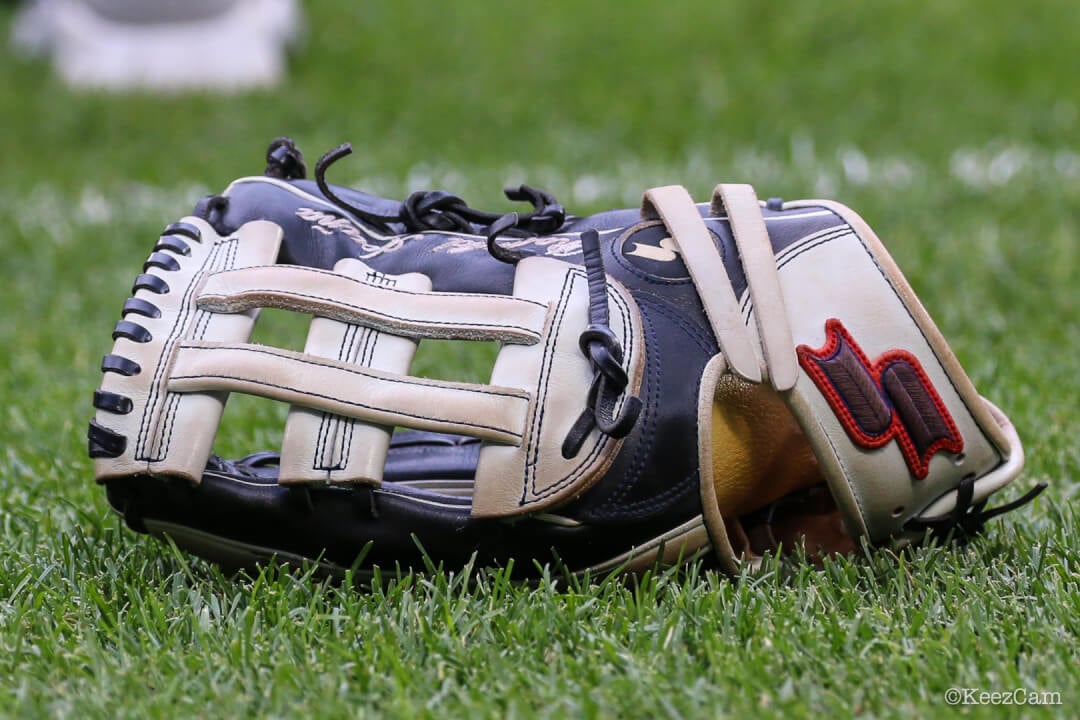 The H-Web is favored by most MLB outfielders.  Acuña Jr. also wore a red stunner from SSK that we showed you at Spring Training:

After that game, we have not seen that SSK glove, or any SSK glove for that matter, on Acuña Jr.’s hand.

Since that fateful night, Ronald Acuña Jr. has been wearing a Rawlings PRO303 glove, the MLB standard, worn by more MLB outfielders than any other glove.  Acuña Jr. is mixing between at least 3 different models.  He has worn:

Should Acuna Have Benched His SSK?

The comment section played a part in WPW learning about the switch, so shoutout to the comments… we read them.  In the comments of our repost, a lot of people said something to the effect of “stop showboating WAH WAH” etc.  Some said it should have been a catch.  Some said I “sound stupid” for saying I would have switched immediately.  Others, like Pat Hisle, former Maryland Terrapin ballplayer, said “Ball security is job security.”

27 likes on a comment is big time.  It also perfectly explains why Acuña Jr. switched.  Here’s Kevin Pillar a few years back, backing up Hisle’s thoughts in an unscripted video:

“That’s why its called ‘Autocatch,’ when it gets in the pinky and thumb, its gonna be caught.”  Pillar is spelling it out that, if its in your web as an outfielder, it sure as hell better stay in there.

Whether its Rawlings or SSK or Walmart brand, if I make a catch like Acuña Jr., in the web, and the ball comes out, that glove is dead to me.  Carlos Gomez, a Gold Glover and one of the best WPW interviews ever, elaborated on the importance of a pocket to a great outfielder:

A “Juicy Pocket” is a security blanket for an outfielder.  Gomez knows this, and its why he gamed this glove until it looked like roadkill and treated it like “one of his kids” (his words).  Gomez may have even nailed the key issue with Acuña Jr.’s SSK, later in this interview.  He says, when the glove is stiff, the ball comes out on diving plays.  With that in mind, lets take another look at that SSK:

When at rest, its open.  As an outfielder who’s played the position for 20 years (I’ve been an outfielder for about as long as Acuña Jr. has been alive), I would never GAME a glove that was that stiff.  Period.  I also would never have made that play in the first place, so I’m not attacking Acuña Jr.’s play, just his glove choice.  At that level of break-in, its simply not ready for service.  Maybe the SSK glove just needs to be broken in more.  For infielders like Javy Baez who wears 4 different gloves in a week and prefers a stiffer break-in, this might be OK.  The infield glove is for redirection, after all.  Right, Tulo?

The outfield glove, though, is meant to catch the ball first.  The transfer is secondary.  An outfielder who drops a ball that was in the web is treading down a slippery slope of distrust and betrayal.  A wise man once said, “Ruin my home run robbery once, shame on you.  Ruin my home run robbery twice, shame on me.” Acuña Jr. did what he had to do, and switched to a glove that felt safer.  Maybe we’ll see SSK again down the road, when its suitable for game play.

We can talk in circles all day about whether he shouldn’t have showboated or who’s fault it was or whatever else the trolls want to complain about, but the bottom line is this: would you switch?