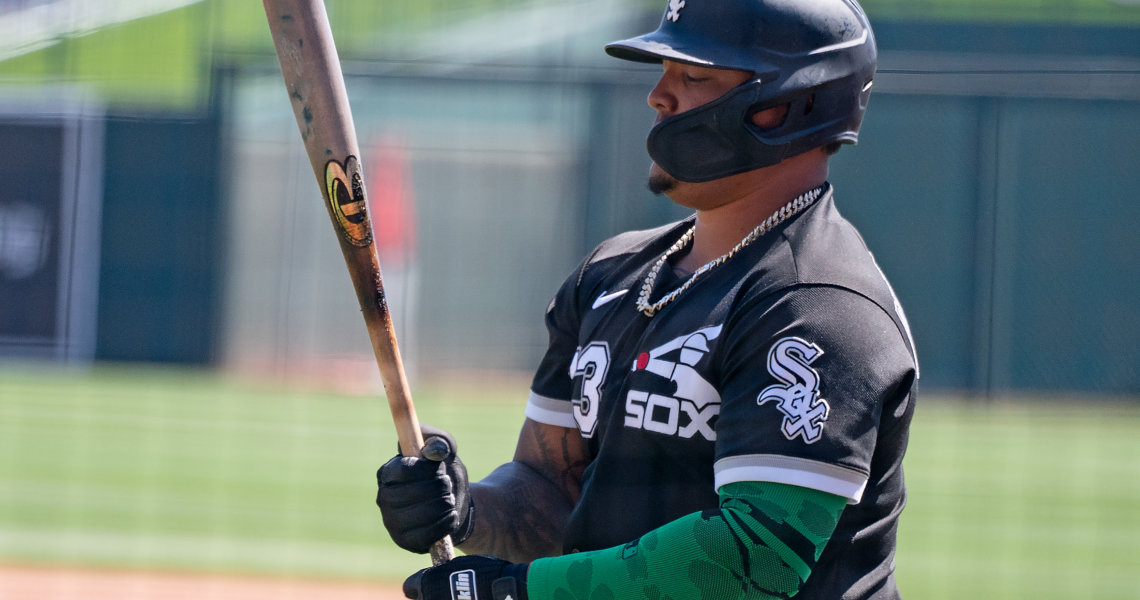 Lets take a look at what we’re seeing around the MLB out of the gate.

Jazz Chisolm is already making a name for himself in south Florida. The infield prospect is looking like he might be a staple in Miami this season.

Lucia Footwear Co. put together some crazy options for Jazz on opening weekend. These are a tribute to one of the most iconic shortstops of all time, Derek Jeter.

Not everyday you see a guy rocking another teams logo on his cleats but I guess exceptions are made for The Boss Formerly Known As The Captain.

Check out Lucia Footwear’s website to shop their available custom cleat designs or you can contact them to have a pair of spikes personally customized.

In a market dominated by Evoshield, a handful of companies are making headway into the protective guard game. G Form has been making waves in the Bigs with their soft and flexible, yet protective products.

Looking past the ridiculously clean baby blues, you can see Lourdes Gurriel Jr. in the G Form leg guard (available for $65). G Form is special because of the technology behind the guard. Their SmartFlex is “soft when lightly touched, yet hardens on stronger impact” which translates to an extremely comfortable guard that will harden to protect you when need be.

Whit Merrifield is seen here wearing the larger of two elbow guard offerings from G Form, the Elite 2, which is available for $55 in a variety of colors.

About the only thing on Machado that doesn’t feature the Jumpman logo is his G Form Elite Speed elbow guard.

Shohei Ohtani is changing what we thought was possible in our sport. In his first start on the bump, ShoTime touched 101 mph on the hill and launched a 451ft homer at 115 mph in the box. That type of firepower has literally never been seen before.

Especially when it’s paired with the ability to bludgeon a letter high MLB fastball 450 feet. Shohei Ohtani continued to pace the league with classic Eastern Hemispheric style, Asics from head to toe. Asics gear is harder to track down here in the US than in Asia. eBay is your best bet to find some unique Asics swag like Ohtani’s two-tone Gold Stage glove.

Five feet eleven inches, 245 pounds of pain. The good-eatin’ Yermin Mercedes debuted as a Big Leaguer by going a ridiculous 8 for 8, a feat that has never been accomplished before.

The 28 year old rookie could not be stopped en route to his MLB record. Mercedes has stood out with some understated gear. We see his black Franklin Pro Classic BGs, an Evoshield PRO-SRZ leg guard, and a pair of Nike Lunar Vapor Ultrafly Elites.

Mercedes has done his damage with some Cooperstown Bat Company lumber. He swings a 34/31 CBYM73, his personal model. This model can be special ordered by contacting the company via email or their in-stock line can be shopped here.

The Kid had some of the greatest swag of all time. When his Nike Air Griffey Max 1 signature shoe dropped again, Big League guys were all over it.

2019 NL MVP Cody Bellinger hopped on the bandwagon here in BP. Seeing another lefty slugger rocking one of the most iconic baseball shoes of all just feels…right.

Trevor Story was one of a handful of other Nike athletes to receive the Griffey Max treatment. These naturally sold out quickly but Stock X has every size available if you’re willing to drop some dough.

The Griffey Max 1 will be on display today for Jackie Robinson Day, too—as evidenced above by Tomas Nido of the Mets. Tag us in more JRD swag.

As always, we can’t cover everything. Join WPW Gold to get yourself into our bubblin’ Discord community which has become a running commentary of what the pros are wearing (duh).