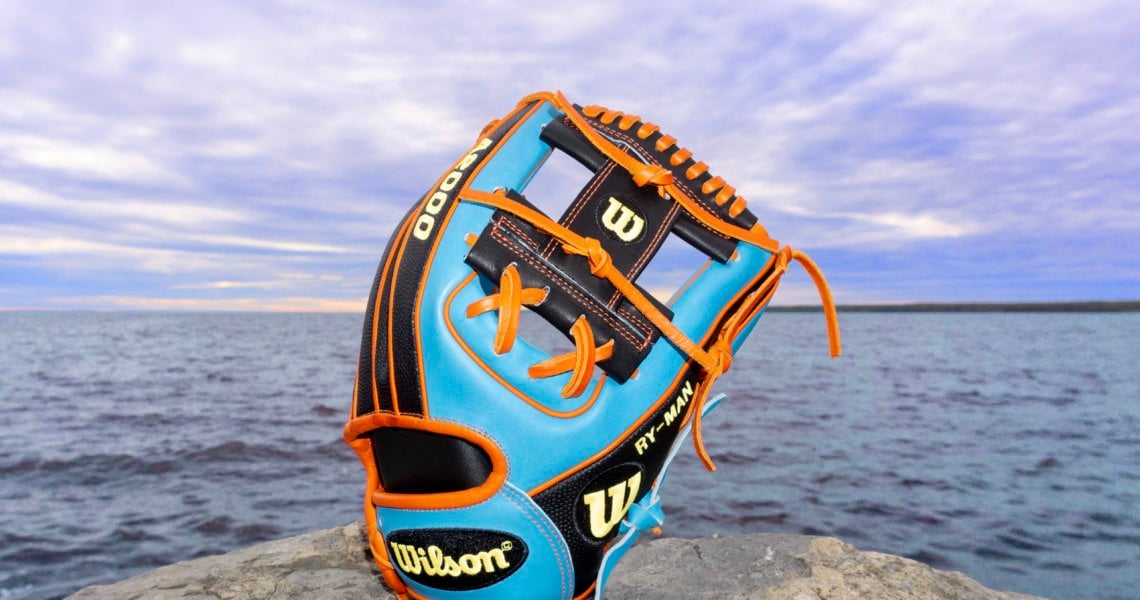 What is the ‘Wilson Glove of the Month Museum’? Q&A with @ry_man_gloves

As one does, I found myself in an Instagram glove account spiral the other night and stumbled on @ry_man_gloves, Ryan Proulx, who’s bio says:

Its one of the more interesting bio’s I’ve come across, and anyone who has 35,000 followers on the strength of their glove collection should get a look from WPW.  I asked Ryan if he’d give me a little background on what exactly the “Wilson Glove of the Month Museum” is (in photos, please), and he kindly obliged and had some excellent insights for anyone interested in gloves. 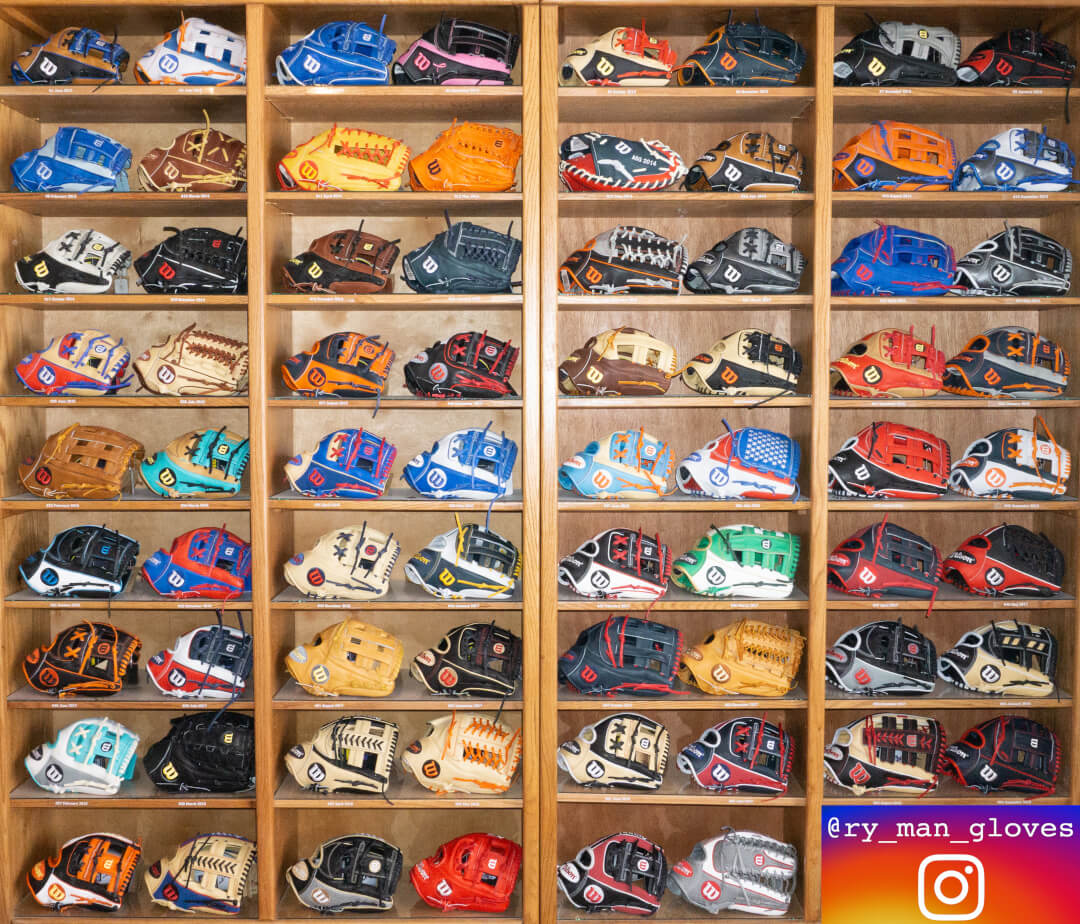 Q&A with Owner/Curator of ‘Wilson Glove of the Month Museum,’  @ry_man_gloves (Ryan Proulx)

@ry_man_gloves: I’ll refer you to a piece of text that was printed on a Rawlings box that I got from Japan. I don’t know who wrote this, as it wasn’t attributed to anyone. It could probably be a little more gender-neutral at the end, but the overall sentiment remains:

“What is a baseball glove?

A baseball glove is a beginning and an ending: a boy’s first sure step towards manhood; a man’s final, lingering hold on youth; it is promise…and memory.

A baseball glove is the dusty badge of belonging, the tanned and oiled mortar of team and camaraderie; in its creases and scuffs lodge sunburned afternoons freckled with thrills, the excited hum of competition, cheers that burst like skyrockets.

A baseball glove is a thousand-and-one names and moments strung like white and crimson banners in the vast stadium of memory.

A baseball glove is the leather of adventure, worthy successor to the cowboy’s holster, the trooper’s saddle and the buckskin laces of the frontier scout; it is combat, heroics, and victory…a place to smack a fist or snuff a rally.

Above all, a baseball glove is the union of father and son, boy and friends, man and men; it is union beyond language, creed or color.”

WPW: You’ve been part of the “online glove community” for a long time.  Tell me about that.

@ry_man_gloves: In the mid-2000s, the website vintagebaseballgloveforum.com was the main online spot for glove information. That forum may have been started with the intent of having it only be about vintage gloves, but it also had a section for modern gloves, and I was on there almost every day. I read as much as I could and learned about the gloves of that era, engaging with the community there along the way, but after a few years, it was closed down. The forum as a whole didn’t actually close down, but rather just the modern glove section. This was because it had gotten to the point where the vast majority of topics and discussions on the forum were about modern gloves, and not vintage gloves, as had originally been the forum’s purpose. For this reason, the owner locked the modern glove section, and this brought about the creation of a new forum, glove-works.getforum.org.

The Glove-Works forum picked up where the previous forum had left off, with much of the same community making the switch, and new members joining all the time. This went strong for probably 5+ years, then it slowly fizzled out to its current graveyard-like state. The content is still on there if anyone is looking for info on gloves from that era (roughly 2005-2015) and the vintage forum also leaves their modern section up to this day for people to check out.

It wasn’t until 2017 that I discovered a new glove community had formed on Instagram. I was pretty late to the party with this, as there had been glove accounts for at least 5 years before I even knew that a “Glove account” was something that existed. I hadn’t used Instagram at all up until that time, as it just wasn’t something that I was interested in, but then I saw the glove content that was on there. People were still discussing gloves as they had once done on the forums, the only difference was that it was now taking place on a photo-based social media platform.

Glove photos were part of the forums, but they were primarily taken and posted when someone was trying to sell a glove. It’s like selling on eBay, in that you’re just showing people what the item looks like and what condition it’s in. With Instagram, people are usually trying to take the best photos that they possibly can. That’s not just with gloves; that’s Instagram in general, regardless of what the subject is. You can choose to be artistic and think about composition. You can learn to use a professional camera and learn Photoshop for editing. You can take it as far as you want.

WPW: Have you ever worked for a glove company?

@ry_man_gloves:  I don’t work for a glove company, nor have I ever. I do have a licensing deal with Wilson that allows me to use their logos/trademarks for glove paintings. I haven’t had enough time to do any glove paintings recently, but I’ve done 5 of them, and I have one more that I need to finish. The licensing deal was something that I pursued because after I did the first painting, people asked about buying it. I didn’t want to sell the original, and I knew that I could get prints made, but I couldn’t legally sell them without having the rights to the trademarks. It was a very simple process, as I just emailed a Wilson employee who I had previously corresponded with, and he sent me a contract from the legal department.

WPW: What is the Wilson Glove of the Month Museum?

@ry_man_gloves: I wrote that I have the “Glove of the Month Museum” because I had already been calling my glove display area a museum in real life. An unexpected benefit of this is that if people think that I’m an actual museum, they’re less likely to try to buy gloves from me. I have sold gloves in the past, and I still do on occasion, but not very often.

My full GOTM set is now up to 71 gloves, which is June 2013 through June 2019, and one from each month. People have asked in the past if I would sell them, and I would, under the right circumstances. The total retail price on the full set is up over $21,000 now, so I’d have to get an offer of more than $25,000 to ever sell them. They’re all limited editions, with only 240 made of each glove, and most stores sell out pretty quickly. A few of the more desirable ones now go for $1,000+ individually. I have a few minor league guys following me on Instagram who are into gloves, so maybe if one of them gets a huge MLB deal some day, they’ll buy the collection.

@ry_man_gloves: One thing to realize when you try on any glove in a store is that it may have been on the shelf for a while, and had a lot of people trying it on, squeezing it, pounding the pocket, bending the fingers, etc. I’ve been in stores with high-end gloves that feel like they’ve been fully broken-in and used for a year, and I know they didn’t come from the factory like that. Stores are great for trying on gloves and seeing which patterns you like, but if a pro-level glove is really soft in the store, it’s likely been handled a lot, and you may want to see if you can order the glove online directly from the manufacturer.

Wilson Japan actually has a practice of having some gloves in stores that are just for trying on, and other gloves that are just for purchasing. You can try on the floor models to see what you like, but if you buy a glove, it won’t be one of those; it will be a brand new one.

WPW: What glove is NOT in your collection that you’d like to have?

@ry_man_gloves: Although I’m known for having my Glove of the Month set, my ideal glove collection would actually be issued/lightly-used gloves from my favorite players throughout the years. A lot of my favorite players’ gloves have been released as GOTMs, but the difference with “Issued” versions it that they’d have the players’ names/personalization stitching on the glove. If I’m showing someone the glove wall, I have to point out which gloves were designed by players, instead of having their name right there on the thumb. I do have some issued gloves, but they’re hard to find and they don’t come up for sale very often. The ones I’d most like to get would be from Altuve, Mookie, Puig, Dee Gordon…if I’m picking one it would be an Altuve issued A2000.

WPW: Do you play ball with the gloves or are they strictly collectibles?

@ry_man_gloves: My Glove of the Month models and any other limited editions all still have their original tags and they don’t get used. Also, my issued gloves stay on a shelf and only have usage from the player that they came from.

I usually order one custom glove per year that I design, and get my name on. Those do get used.

If you need inspiration for your Wilson custom glove, here’s the most recent Ry-Man model. Also, I bought a professional camera, so no more iPhone pictures for me. __________ #Wilson #WilsonWednesday #TeamWilson #A2000 #1786 #Baseball #BaseballGlove #BallGlove #Glove #Softball #SoftballGlove #GloveLove

WPW: What are your favorite gloves in your collection today?

@ry_man_gloves: The custom gloves that I use are my favorites. Even though they’re sweaty, dirty, and the least valuable gloves that I own, they’re also the ones that I slowly broke-in, forming them to my hand. They’re more important to me than the gloves that sit on a shelf.

Thanks to @ry_man_gloves for the awesome answers to our questions.  If you have more questions for Ryan, please comment below!  Additionally, if there are others like Ryan that you’d like to hear from, please let us know in the comments.