Ryan Zimmerman, 2009 winner of the Gold Glove and Fielding Bible awards, doesn’t just add runs, he takes them away.  Zimmerman’s Rawlings Pro Preferred PRO200-6K, which is available online through Eastbay, is featured in one of GEICO’s Caveman commercials.

Those commercials were tired the moment they first aired.  But the gloves does look great.

For sunny day games, Zimmerman wears Under Armour Igniter sunglasses, similar to those you see in the feature. As you can see in the photo, Zimm’s Igniter sunglasses have a red Under Armour logo.  Aside from that, they are just like the style available online, and there are also a few other colorways that are pretty sharp-looking as well.

Zimmerman also wears an Under Armour wristband with his number on it.  This, as usual, is unavailable online. A little fun fact: Zimmerman played AAU baseball with a few guys you may have heard of—David Wright, BJ Upton, and Mark Reynolds, and supposedly they all played infield.  How would you like to pitch against that lineup?

Under Armour Wristbands (no numbers) 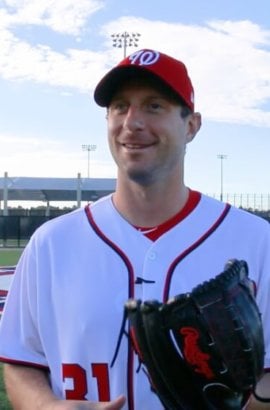 Trea Turner on his Weapons of Choice

Video: Jeremy Guthrie’s Got a Ph.D in Baseball Swag