Its been a blistering start to the year, with big announcements from adidas (signing Correa) and Under Armour (The Harper One), setting the stage for an all-out war for baseball footwear supremacy that we will all reap rewards from.  It is because of this competition that we are now entering a “Golden Age” of baseball footwear.  Their signing of Correa (and Kris Bryant) means that adidas isn’t messing around. Under Armour rides into the battlefield with their first-ever signature baseball cleat, Bryce Harper’s “Harper One,” while Nike is still Nike and Mike Trout is still Mike Trout. Then there’s little old New Balance, who continues to steal the hearts of performance-minded players throughout the country. They make a tremendous baseball cleat, whether they’re flaunting a big name player or not.  On top of that, there is an entire industry bubbling just beneath the surface as talented shoe artists can give ballplayers that 1 of 1 luxury even without a Correa-type mega-deal.

It all adds up to the most exciting and most competitive landscape that baseball footwear has ever seen. Who wins this competition?  We do. With so much riding on the battle, you can expect that, over the next few seasons, we’ll be seeing the best baseball cleats ever made. Lets get a look at the ground floor, MLB diamonds, to see who’s winning so far. One of our favorite cleat choices so far, Hunter Pence, normally a Mizuno guy, is paying homage to a legend with the Kobe 11s, cleated by Custom Cleats, Inc. Pence may be the last guy you’d expect to wear a flashy cleat, but with Custom Cleats, ballplayers now have the ability to wear any shoe they can possibly dream of as a cleat. You may be skeptical of quality, but do you think Hunter Pence would be wearing something inferior performance-wise, just because it looked good? No freaking way. Lots of guys showing off team colorways of the UA Yard 2016. The Yard is UA’s most successful make, worn by Dee Gordon, Byron Buxton (below), and Joe Panik among many others. Nike was the usage leader in 2015 (we counted), but Nike baseball execs must be a little hotter around the collar lately, with a much nastier group of competitors than ever before.  Luckily, they’ve got the best all-around baseball player on Earth, Mike Trout and his Trout 2s to carry the swoosh on the diamond. The Trout 2s are the first baseball shoe since Griffey’s Max 1 that have cross-over appeal, the way that basketball shoes do, thanks to the downright dirty turfs that Nike has offered alongside the cleats. I wouldn’t pay $140 for baseball cleats if they were made of diamonds, but those turfs… for $120 those turfs are mighty tempting. The Huarache 2K Filth has been the most popular Nike cleat since its release, but I’ve heard mixed reviews.  A source close to some pro ballplayers told WPW that the performance feedback on these has not been good.  Nevertheless, they look great, and were everywhere at Spring Training.  They’re also a favorite choice for customization, like the above SMUs done for Cargo, and those done by artists like @nomad_customs and @truebluecustoms (below). And we can’t forget about Jordan, which is currently running the IVs out, which look as good as they do on the hardwood: After years of anonymity, adidas is positioning themselves as the young, up-and-coming brand, and signings like Carlos Correa and Kris Bryant help legitimize that image.  The signings are great news for us because with all they money they’ve laid out, we can be sure that adidas will be driven to develop their best possible baseball footwear to compete for our loyalty. adidas isn’t only signing the superstars, but they’re bringing in some other great ballplayers that we at WPW love to watch.  The tough-as-nails Kevin Pillar (above) wears the sharp adiZero Afterburner 2.0, and swiss army knife Josh Harrison, who is currently wearing the Energy Boost Icon like Correa and Bryant, is also a great ambassador for adidas.

New Balance hasn’t made any marquee million dollar signings lately, but the reason we at WPW love them so much is that they make a concerted effort to improve baseball-specific products. New Balance borrows technology from their cutting edge running shoes, but they also have a research-based focus on baseball, and that attention to detail has elevated the brand from non-existent to Nike’s biggest threat in only a few seasons.

Our own Josh Wilkie talks about that attention to detail in his “What’s in the Bag” video on our YouTube channel:

One of the more common phrases we hear is “man, I wish they were making these when I played”… there are a lot of older baseball guys that envy the quality and style of the gear we get to choose from.  No part of the wardrobe is that made more apparent than cleats; from the MLB all the way down to Little League, the competition between brands has ushered in a “Golden Age” of baseball footwear, and gear in general, that we will all enjoy.  Just start saving those pennies now.

Let us know, which brand do you wear? 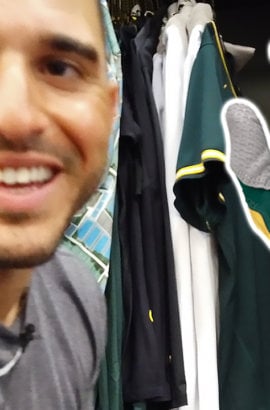