For our original post in this series, please check out The GIF History of Wilson’s Glove of the Month: #1-#19.

In June 2013, Wilson launched a simple concept that would ultimately create some of the most collectible baseball gloves ever.   It’s the “Glove of the Month,” a limited edition A2000 or A2K model each month.  Since then, these gloves have become some of the most coveted by glove collectors.  Wilson “Glove of the Month” models are very limited, and they aren’t available at large national chain retailers (one of the original goals of the program was to boost business for smaller “Mom and Pop” stores).  These dealers are also instructed to not sell GOTM models online (at least for a few months) and only sell them in-person or over the phone.  In that sense, inventory can be scarce.  If a GOTM that you want is released, it’s best to buy one quickly because most of them don’t stay in stock very long.

Why a History of Wilson Gloves of the Month?

Mostly because I can, and Mike the editor said you guys might like it.  I have about 100 Wilson gloves in my collection now, including at least one of each GOTM model!  I didn’t start collecting GOTMs right when the program started, so in order to obtain a full set, I had to track down all of the previous gloves that I had missed.  This involved contacting each of the 100+ GOTM dealers in the U.S. and Canada to see what they still had in stock, as well as making deals with other collectors because some of the gloves had long since been sold out.  Once I started getting the gloves, I arranged them on shelves, leaving blank spots for the ones I was missing, which made me keep going until all of the blank spots were filled in.  I was fortunate to find a collector in the midwest that had many of the early gloves that I was missing (like the Castro, Andrus, and Miguel Cabrera Triple Crown glove) and he was willing to sell all of them to me at a very reasonable price.  There was definitely some luck involved in getting the full set, and if I hadn’t found that collector, there’s a good chance that I wouldn’t have been able to finish the set.

How do you buy Wilson Gloves of the Month?

To find which stores are part of the GOTM program, Wilson’s dealer locator (wilson.com/en-us/forms/finddealers) can be used. Select ‘Category’ and then ‘Glove of the Month.’ Wilson also lists each GOTM on their website, but they’re only put up there for sale on the site if there are extras that dealers didn’t purchase. The majority of the time, these gloves are never sold on wilson.com, and they’re just immediately listed as ‘Sold Out’ because they want you to buy these gloves from small dealers.  The best way to get GOTM’s of the past is on marketplaces like SidelineSwap.  There are plenty available at that link.

There is also a charity tie-in with the GOTM program, as a portion of the proceeds go to the charity Pitch In For Baseball, a non-profit that distributes baseball and softball equipment to kids around the world.

The January 2015 Glove of the Month was modeled after one of Alex Cobb’s game gloves when he was with the Tampa Bay Rays.  The pattern was originally designed years earlier with input from C.J. Wilson, hence the “CJW” designation.

Customize an A2000 CJW pattern here.

The KP92 pattern used for the February 2015 GOTM was designed in 1992 with the help of Twins legend Kirby Puckett, which is where the model name came from. This colorway was chosen by fans on social media, who were asked to vote for their favorite out of four different KP92 designs.

Back when Josh Harrison was a utility man for the Pirates, the March 2015 GOTM is one of the infield gloves that he designed and used. This was the second GOTM to have metallic gunmetal leather, which has more slickness than standard steerhide.  For performance reasons, Wilson won’t use the metallic gunmetal leather on the palm portion of a glove. The gray on the palm here is the standard gray steerhide.

The April 2015 GOTM is modeled after one of the custom gloves that Jorge Soler used while with the Cubs. He now uses a more subtle black leather 1799, but he does play for the Royals, so he could bring the royal blue back if he wants.

The May 2015 GOTM marked the first time that this version of a PP05 (with an H-web) was released to the public. Prior to this, it was a model only available through the pro department. A few years before this, a limited 500 glove run was made of a saddle tan PP05 model, but they didn’t have this H-web (dual post). Instead, those limited gloves had an I-Web (Wilson H-web) with a V-shaped anchor at the bottom, like Placido Polanco used to have.

The June 2015 GOTM is one of Jurickson Profar’s infield game glove designs from his time with the Rangers. 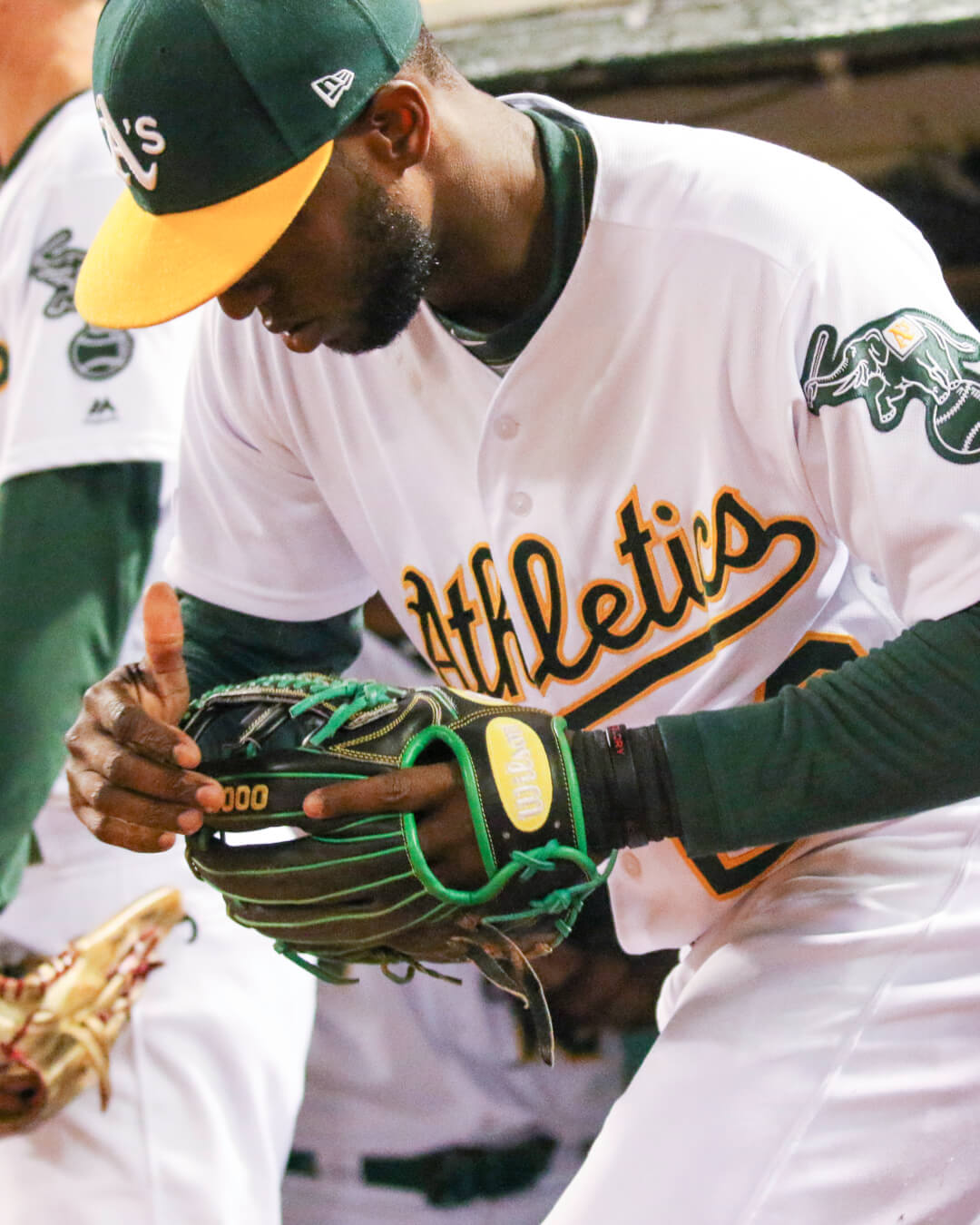 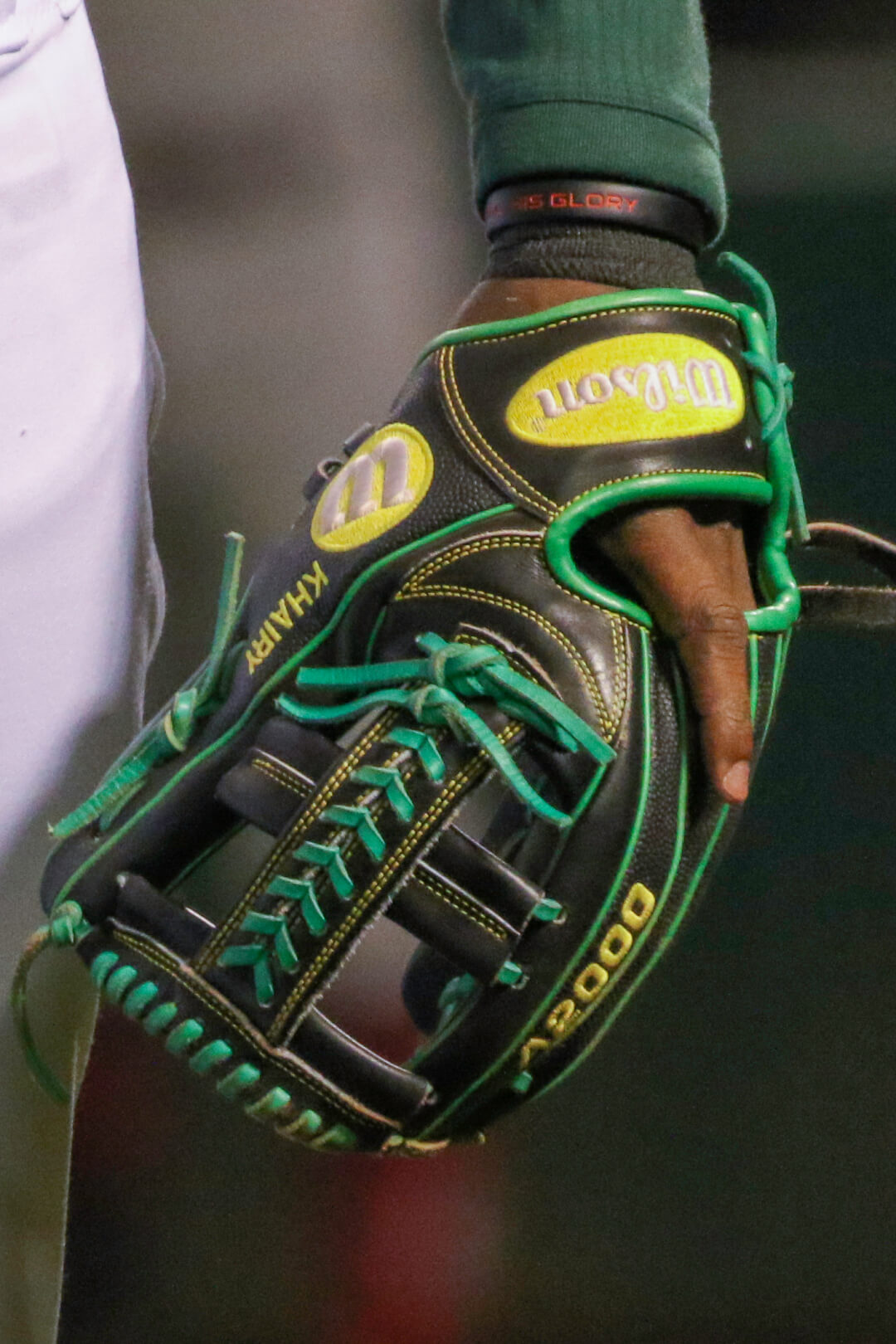 He has since switched to the longer, deeper 1785 pattern, and his gamer is black with green and yellow accents now that he’s playing for Oakland.

The July 2015 GOTM was considered to be a “Sneak Peek” of the D33 pattern because it hadn’t yet been released in a retail line, and this was the first time it was being sold to the public. Since then, the D33 has become part of the retail line, and it’s one of the most popular gloves for pitchers.

The August 2015 GOTM is one of the many different designs that has been used by Astros Gold Glove second baseman Jose Altuve. 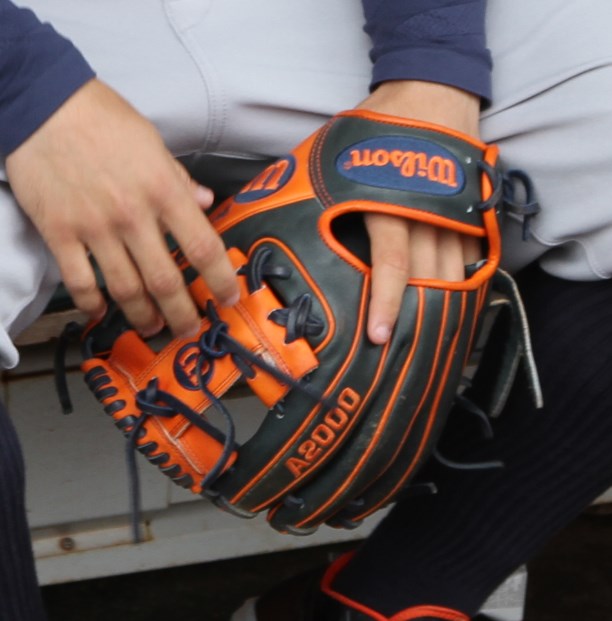 For the last few years, he’s been going with a different design every season, and each one has been a successful part of Wilson’s retail line. 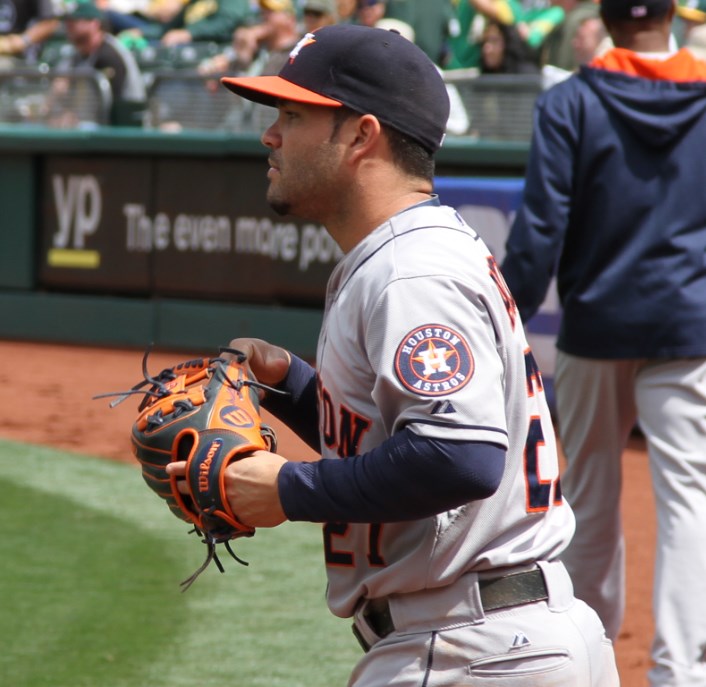 I also don’t think it’s a coincidence that one of Altuve’s gloves was selected to be GOTM #27 considering that’s his uniform number.

Like September of the previous year, the September 2015 glove design was chosen by Wilson fans on social media. There were four designs to choose from, with each one being an A2K DATDUDE model (the Brandon Phillips pattern). This glove won the vote and was released, although none of the glove designs were colorways that Phillips ever actually used.

The October 2015 GOTM was designed with input from Evan Longoria, and it’s the model that he’s used for years, albeit not in this colorway. This is currently the only EL3 to be a GOTM, and also the only one to have the “Dark Brown” leather color.

The November 2015 GOTM was designed and used by Dee Gordon when he was with the Marlins. After going to the Seattle and being moved to the outfield, it looked like we wouldn’t see him use this anymore, but with Canó’s absence, Seattle put Gordon at second base, and this glove made its return last season. 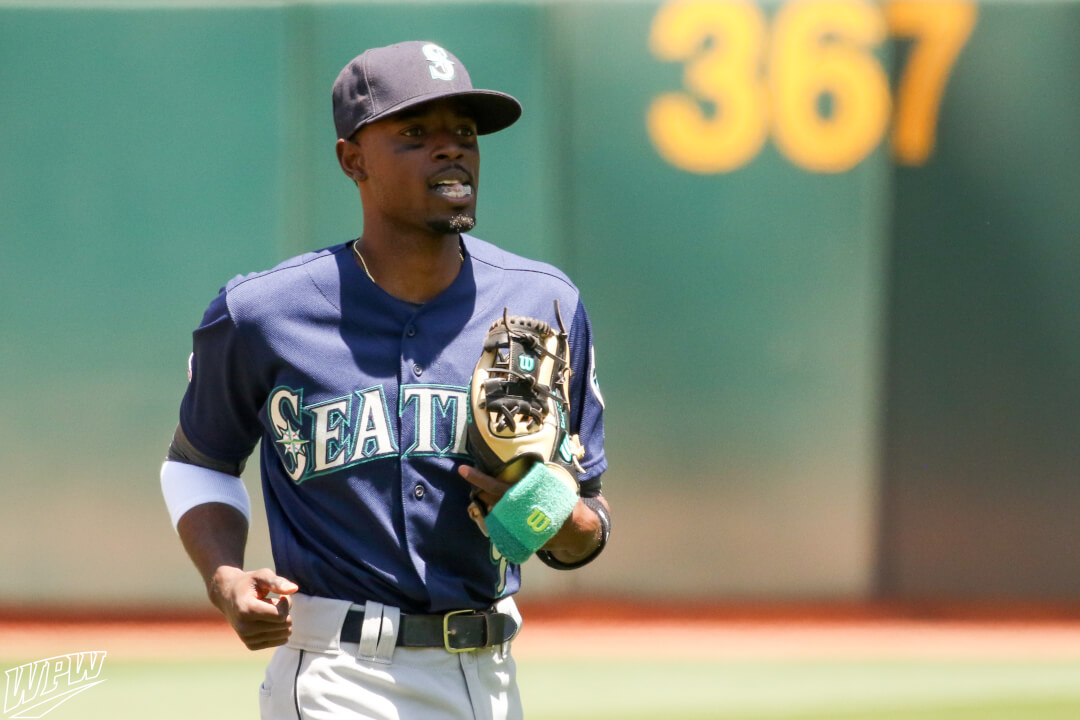 Since then, he’s become Seattle’s starting second baseman, and he’s using a very similar glove to this. The differences are that he swapped the blonde binding for black, and also changed the orange stitching to Mariners green.

The December 2015 GOTM was released as a throwback of the glove that Brandon Phillips used in 2010, which he named “Sweet Lou.” When the A2K series was first starting out, this “Retro Brown” leather color was featured on most of the retail gloves, but it has since been discontinued. The color appears on only one other GOTM, that being the Hanley Ramirez Marlins throwback from March 2016. 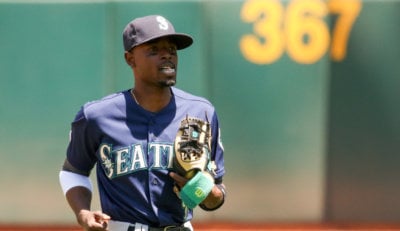 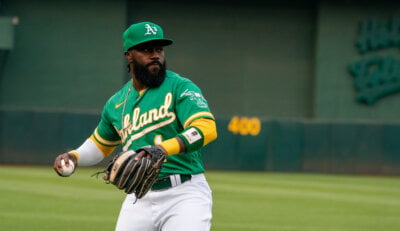