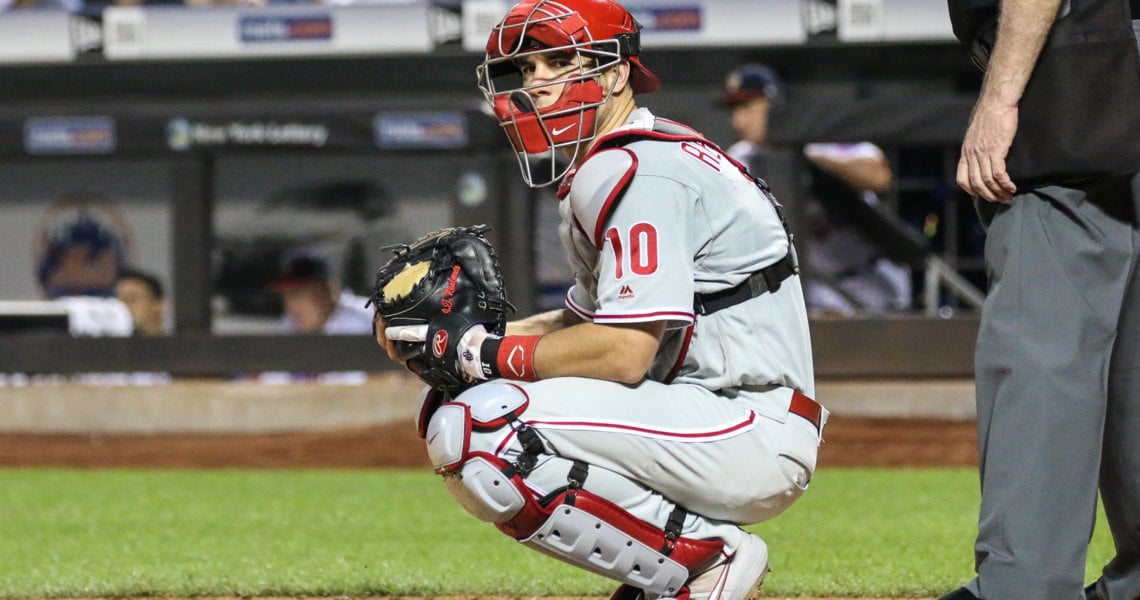 A great defensive catcher is game-changing. Whether managing the pitching staff, controlling the run game, or stealing pitches on the corner, a great catcher might be the single most impactful player on the diamond. We have looked at some of the best gloves for first base, second base, shortstop, third base, and outfield, and in this post we’ll name the four best catcher’s mitts on the market today.

The All-Star Pro Elite line is the gold standard behind the dish. While not nearly as popular anywhere else on the diamond, All-Star has built an empire specializing in catcher’s products. The original All-Star Pro Elite (tan palm with black back) is an all-time favorite for the soft and formable tan palm with the stiffer black back leather to retain shape (yes, leather color is known to have an impact on stiffness). The all-black model is popular for the overall stiffer leather it provides.

Martin Maldonado, a 10-year veteran of MLB despite a .218 career batting average, provides for his family with great defense. Maldonado trusts All-Star catcher’s mitts with his livelihood. Maldonado has used a variety of different color combinations and sizes over the years but he showed off his most recent custom on IG recently. This is a stealthy black 34″ CM3000MBK with orange stitching for some pop and navy laces. 100% is stitched on the web to “remind him to give 100% of the pitches 100% of his attention and focus.” All-Star offers one of Maldy’s gamers on their website for $400. BaseballExpress.com has a great selection of All-Star catcher’s mitts, too.

The PROSCM33, and its larger twin, the PROSCM43, is Rawlings’ classic catcher’s mitt. These 33″ & 34″ patterns feature a narrow, but deep pocket that is perfect for stealing pitches on the corner. This is an ideal option for the serious catcher.

JT Realmuto hits the cover off the ball, but it’s his defensive ability that turns heads. A sub-1.9 second pop time (!) and elite level framing earned him Gold Glove honors with his Rawlings PROSCM33KB, which has an inch smaller circumference (33″) than the PROSCM43. (Pop Time measures the time from the moment the pitch hits the catcher’s mitt to the moment the ball reaches the fielder’s projected receiving point at the center of the base.)

While Rawlings released a special edition Gameday 57 model in Realmuto’s pattern, it sold out fast. You can still pick up Realmuto’s gamer as a 34″ via the Rawlings’ customizer for $480, as well as the 33″ at the same price. We think JT’s worn both. BaseballExpress.com has a Pro Preferred CM43 for $360. Rawlings.com also offers a stock PROSCM33 in black and tan for $360.

Rawlings also recently dropped a Yadi “Gameday 57” model with mesh back for $300. Worth a look.

This pattern is a WPW favorite. Wilson developed the M2 pattern with insight from one of the greatest catchers of all time, Pudge Rodriguez. It’s no secret that catchers take a beating. Often times, catchers are sidelined with injuries to the thumb on their glove hand. There are products on the market that are intended to protect the thumb, but with the M2, Wilson has taken it a step further.

The M2 takes its pattern design from one of Wilson’s most popular models, the M1. Both the M1 and M2 are 33.5″ and feature a deep pocket that will perfectly wrap around the ball. What makes the M2 special is the integrated thumb protection. A padded and extended wrist strap serves as a brace that will support the small bones and tendons in your thumb.

Wilson glove guru’s Ryan and Aso explain the purpose behind the extended wrist protection in this video. This catcher’s mitt could be an asset for any catchers out there who have battled thumb injuries, or receive pitchers with a dirty two-seam/sink, but don’t want to add anything extra (like this $25 Evoshield piece) to their glove hand. The 2021 Wilson A2000 M2SS pictured above features Wilson’s classic Pro Stock leather, their weight-saving synthetic SuperSkin, and the new bolded logos. It is available for $280 from BaseballExpress.com.

The Mizuno Pro GMP2-335C is made from Japanese tanned US Kip leather that will allow you to form the moldable leather to fit your specific play style. Mizuno uses scans of pro player’s gloves to better establish the shape and pocket on their entire Mizuno Pro line.

After bouncing around between the Mets, Dodgers and Rays in 2019, MLB vet Travis d’Arnaud found a home in Atlanta and had a career year in 2020. Travis’ gamer is technically a Mizuno MZP23, which is a pro only model. The GMP2-335C is essentially the same pattern d’Arnaud games. You can get the GMP2 in camel at Eastbay.com for $350.

That’s our top four catcher’s mitts, but we would love to hear from the catchers out there who might have a mitt that they love. Please weigh in down below.