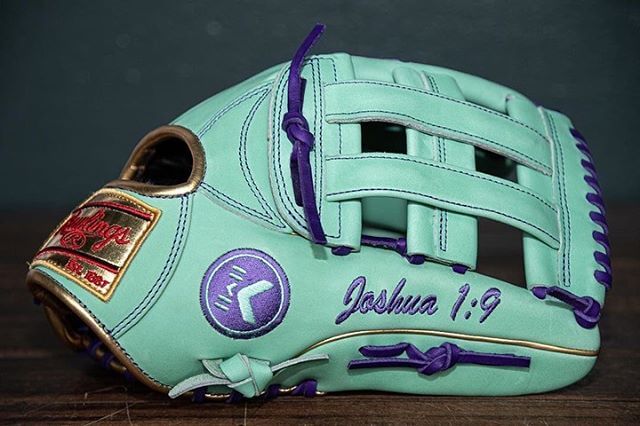 In this post, we’ll show you four of the most popular outfield gloves in baseball. If you look around Major League Baseball, you’ll find these gloves on the overwhelming majority of outfielders. We’ll discuss what characteristics make these gloves so popular, including web type, glove length, and pocket style.

The PRO303 outfield glove pattern from Rawlings has been one of the most popular outfield patterns since the birth of WPW. More specifically, the PRO3039-6, the 12.75″ H-web version, has been seen on more guys than we can count. The pattern provides a sizable, deep pocket that closes thumb-to-pinky or ring finger depending on your break in.

Here’s one of our favorite videos we’ve ever done with Kevin Pillar, who talks about the H-Web and his expectations for a glove:

Defensive wizard Kevin Kiermaier’s weapon of choice when roaming centerfield is the tried and true PRO3036-9.

His relatively simple black and grey color scheme is taken up about 10 notches by the platinum labels from Kiermaier’s stellar 2015 season where he took home Rawlings’ top honor, the Platinum Glove Award. This honor is reserved for the best defensive player in each league. Rawlings released Kiermaier’s game day glove for $400 in the Gameday 57 series. It even features the super rare platinum thumb oval just like Kiermaier’s.

If you need something a little flashier, look no further than grizzled vet Matt Kemp. MLB veteran Matt Kemp signed a deal with the Rockies and took full advantage of the Mile High purple. Mint has become somewhat of an accent color for the Rox in recent years and Kemp decided to utilize it in a BIG way. All mint, purple accents, pops of gold, and a custom logo make this one of the most unique in The Show. You can pick up this custom 12.75″ Rawlings Pro Preferred PROS3039-6 (minus the gold labels and the custom logo) for $480 through the Rawlings customizer.

The Rawlings PRO601 glove pattern features a six-finger style Trapeze web and a FastBack adjustable wrist strap. While not quite as popular as the PRO303, some of the games best swear by the PRO601 pattern.

Twelve year vet and one of our all-time favorites Andrew McCutchen made the switch to Rawlings a few years back and is using a 12.75″ Heart of the Hide PRO601. This white and red offering is flashier than Cutch’s gloves in the past but it pairs beautifully with those Phillies threads. You can pick up a non-gold label version of this glove for $380 from the Rawlings customizer.

Being the best player in the world means you get some special treatment. Mike Trout’s Rawlings Pro Preferred PROSMT27 is a rebrand of the PRO601 pattern. Trout gamed a PRO601 until Rawlings gave Mike the well deserved honor of his own game model, available for $360 from Dick’s Sporting Goods. The version pictured can’t be replicated, but a similar version can be had through Rawlings’ custom builder for $480.

Wilson’s most popular outfield glove pattern is the dual post webbed 1799. The 1799’s dual post web is referred to as an H-Web by just about every other company out there. The model features a deep pocket with a thumb to pinky or ring finger close and a squared off heel.

The 1799 is a 12.75″ pattern seen here in a classic-meets-custom color combo. Kyle Schwarber’s mostly saddle tan gamer features a treasure trove of custom features. The snakeskin finger, the custom thumb logo, and the bordered bold wrist/thumb logo are pro exclusives.

A near identical copy can be had from Wilson’s new customizer for $380.

Hollywood’s newest superstar is the prototypical 5-tool ballplayer. Mookie Betts is one of the few people who can put their name in the conversation for best player in The Show with the freak-of-nature that is Mike Trout.

Mookie Betts’ defensive exploits include four Gold Glove Awards and a Wilson Defensive Player of the Year award. A mantle like that warrants some special leather. Wilson obliged and created the 12.5″ A2K MB50GM. This is a modified version of Wilson’s eternally popular 1799 pattern. The MB50 retains the 1799’s deep, secure pocket with a squared heel that will swallow the ball and will only get better with age.

Mookie went crazy with his first game model in Dodger blue. Royal blue and white SuperSkin add to the look but drastically reduce the weight of this 1799 little brother. The black Pro Stock Select leather web and palm provide this model with that classic A2K feel that is hard to match. Wilson’s new bolded logos outlined in red tie together this eye-popping outfield glove. Wilson recently dropped this glove for their 2021 glove line. It is available for $380 through Wilson’s website. We caught up with Mookie during Spring Training before COVID shut us down. Check out what he had to say about his gamer!

Mizuno has been a staple on the baseball field for over a century. Their glove craftsmen meticulously build their top of the line models with sniper-like precision. Check out our WPW Origins story on How a Mizuno Ball Glove is Made to see how truly special each piece of Mizuno Pro leather is.

The new face of the Red Sox, Alex Verdugo, hit over .300 in the shortened season and games one of the most unique gloves in the league. While Mizuno offers a wide range of classic leather, Verdugo’s offering is anything but classic. Verdugo shows his cultural pride with this Mexican flag themed Mizuno Pro.

This 12.75″ Mizuno Pro is custom from top to bottom. The Mexican flag color combo appears just about everywhere on this glove. The leather on the back, the text on the thumb and, if that wasn’t enough…

Dugie even had the Mexican flag embroidered on the palm. You can pick up the closest clone of Dugie’s gamer for $500 through the Mizuno customizer. The trapeze web was popular with Japanese legend Ichiro Suzuki. A fully laced web can create a deep pocket that will wrap around the ball.

If something that colorful isn’t your style, underrated vet Brett Gardner has you covered. Gardner uses the same 12.75″ Mizuno Pro Trap in a stealthy all black color combo available for $350 from Mizuno’s website.

What Size Outfield Glove Should You Buy?

If you’re wondering about outfield glove size, you can bet that there isn’t an outfielder in the Big Leagues using a glove under 12.5″ inches. In fact, 99% of MLB outfield gloves are 12.75″-13″ inches. There are even some guys (we can’t name names) that exceed the MLB glove size limit of 13″ inches, using softball patterns that get up to 13.5″ or maybe even larger. If you’re a teenager or older, you should probably be looking for a minimum 12.5″ up to 13″, and if you’re younger, you might want to go a bit smaller. The two most important elements to an outfield glove are being able to reach for a ball (length) and, once caught, keeping the ball in the pocket. For those reasons you’ll want to have the biggest glove you can handle.

With all that said, there’s no reason the glove you already own can’t get the job done in the outfield. After all, there are future Big Leaguers in the Dominican Republic right now that are fashioning baseball gloves out of old cardboard—so don’t get too caught up in the details. No glove will ever take the place of practice.

What is your go-to glove pattern when roaming the outfield? Let us know down below! 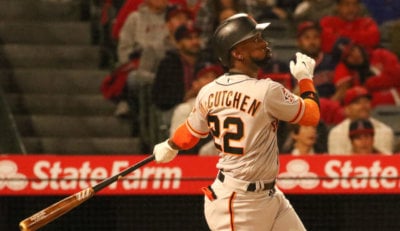 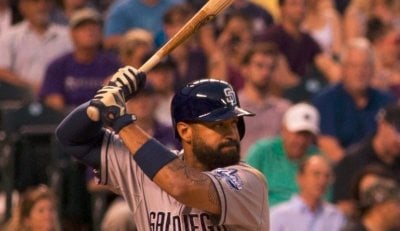