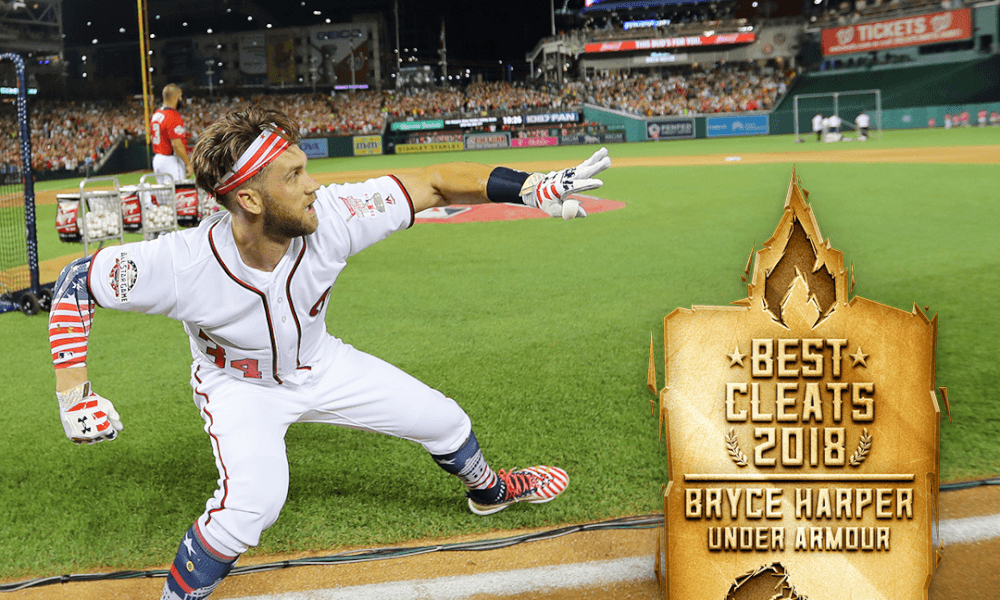 The prestigious BEST OF WPW 2018 awards have completed, and here is a quick recap of the winners, starting with Bryce Harper who won two of the four awards with his HR Derby get-up. Harper’s signature red/white/blue Harper 3s (available in a youth version only) for the Derby belong in the Smithsonian, along with the bat… “Best Bat” was a repeat performance for 2/3rds of the award winners.  Victus Sports and their custom painter, Diesel Bats, won for the second year in a row.  Last year’s win was Gary Sanchez’ Kraken bat which broke the internet: This year it was Harper’s “We the People” BH137.1 that he used to win the HR Derby in dramatic fashion. This bat is no longer available, but Baseball Express does offer a bunch of Victus models at this link.  The BH137.1 is most similar to the Victus V243 (at that link). Noticing a trend here?  Buster Posey / Marucci Sports / Mache won for “Best Accessory” for Buster’s 4th of July gear.  USA so hot right now.  Admittedly, something that protects your chest from 95+ is not really an “accessory,” but Posey still wanted to win it (he shared it on IG), and Mache, an absolute custom KING, was pumped regardless:

Not shoe related (sorry) but thank you to everyone who voted my custom painted @maruccisports chest protector along with the matching helmet and shin guards for @busterposey as the best accessory of 2018 with @whatproswear. It’s always a good feeling to know when people like your work. If they say recognition doesn’t matter they’re lying to you lol. #whatproswear #angelusdirect #USA #busterposey #catchersgear

Marucci plans to offer a Buster Posey signature catchers set, but until then you can shop their Mark 2 set at this link. The leg guards were completed by Marucci, and the chest protector was done by Mache. “Best Glove” was a bit of an upset, as the 6th seed Marcus Stroman and his Rawlings Heart of the Hide PRO315-4J 11.75″ glove beat out the 1st seed, Javy Baez and his camel one-piece SSK. Stro’s gloves had a gold theme in celebration of his 2017 Gold Glove award. All of them were absolute fire.  The columbia blue winner can be bought (without the gold labels) at this link.

What do you think about the winners?  Who got snubbed?