Little did I know when I was shooting this game that so many of the Futures Game studs were going to be breaking into The Show so quickly.  Benintendi, like the rest of the UA athletes that day, rocked some swaggy UA Deception DT cleats that are due out in October. Benintendi swung a Victus JR2 that day, but he just got a new order today, the Victus BS23.  According to Victus:

The BS23 has a long, medium thickness barrel and 1″ handle.  The flare knob does not have a ridge and is always preferred by players who like to drop the pinky.

The JR2 is most similar to the JC24 on the Victus site. Dominic Smith, Mets #2 prospect, was swinging a Marucci VW10 (Vernon Wells) with a Lizard Skin grip.  The VW10 used to be offered on Marucci’s site, but no longer. We’ve also seen Smith swinging a Tucci (in the AZ Fall League last year).  He was wearing NB’s in AZ but has since switched over to Nike, and his representation, MVP Sports Group, took good care of Smith with these Nomad Customs Trout 3s: Gary Sanchez, who also got called up to be the Yankee DH the rest of the way (the End of A-Rod), can handle catching duties when needed.  His All-Star System 7 gear is always stylin’. Sanchez’ chest protector looks like it is the All-Star CP40PRO, which is due out in 2017 with the leg guards, LG40PRO. As for the wood, Sanchez gets around a bit. Renfroe also had some never-before-seen adidas batting gloves.  They say adiZero on the strap, but we’ve got nothing on them at this point. Dansby Swanson is still swinging his I13H, which is he must like because he’s been swinging it since Spring Training. Travis Demeritte, who was just traded from the Rangers to the Braves, wore some artwork by Kickasso on his feet: The jerseys were no help whatsoever to Nike’s Trout 3 Luminescent Collection, but that didn’t stop Rockies #3 prospect Jeff Hoffman from rocking the black & greens.  He’s still rocking the Nike SHA|DO leather that he sent us a shot of last year, too. Video: Dansby Swanson Tells WPW why he Switched Back to A2000 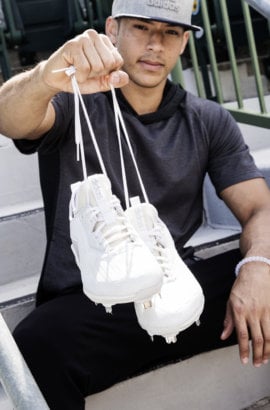