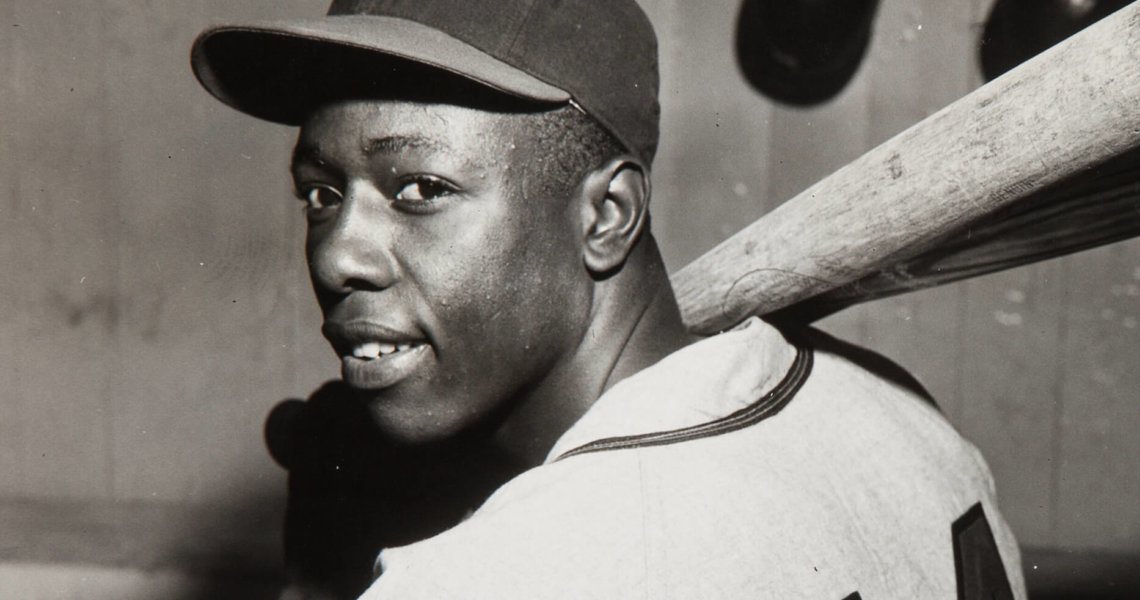 Yesterday, our Home Run King Hank Aaron made his debut in right field for God’s Angels. Among an outpouring of tributes from the baseball universe, we wanted to pay tribute in our own special way.

In this post we’ll take a look at Hank Aaron’s bat, the most lethal weapon in baseball history, clobbering pitchers for more runs, (2,297 RBI) and more total bases (6,856) than any other. We’ll look at the brands and models he swung, how it changed over time, and which bat model he swung to break Babe Ruth’s unbreakable record. Much credit is due to MEARS Auctions owner Troy Kinunen, who wrote an extensive history on Hank’s lumber for CollectiblesCentral.com.

Henry Aaron, an 18 year old shortstop for the Eau Claire (WI) Bears of the Northern League, signed a contract with Hillerich & Bradsby on August 8th, 1952.

For $50 dollars, H&B could use Henry’s name to market their world famous Louisville Slugger bats, while the “Henry Aaron” signature would be branded on his bats. In that season, Aaron converted from his self-taught cross-handed hitting style en route to a .336 average and the league’s Rookie of the Year honors. He swung a D89 model, first used by light-hitting 1940s outfielder Erv Dusak. It was a 35 inch, 33 ounce ash Slugger bat. Ash was the only wood type swung in those days.

In the next season, he helped break the “Sally” League color barrier and continued to dominate while gracefully deflecting bigotry for the Jacksonville Tars. While bearing the burden of desegregating a league, he swung a hot stick, the D89, and led his team to the championship and won the league MVP.

In 1954, Hank caught a “break,” as another legendary home run hitter, Bobby Thomson, broke his ankle in Spring Training, opening the door for the 20 year old Aaron to join the Big League club, the Milwaukee Braves. He continued to rake with the D89 in the same 35 inch, 33 ounce dimensions, but placed his first order for a new model, the T73 at 36 inches, 33 ounces.

In his second year with the Braves, Aaron broke out as a superstar, carrying a T73 36 inch, 36 ounce tree trunk to bat in his first All-Star Game. As if compelled by the baseball gods, Aaron found his new favorite model in the second half of the 1955 season: the Babe Ruth R43. With the Slugger R43, according to Kinunen, Aaron dropped back down to 33 ounces, a good five ounces lighter than anything Babe Ruth ever swung. Aaron would favor the R43 through the 1956 season, leading the NL twice in doubles and winning his first batting crown in ’56 with a .328 average.

For Hank Aaron, a 1956 batting crown meant room for improvement. He asked for a new bat, which was given the model number A93. The model, judging by photos taken by MearsOnlineAuctions.com, is meatier than the R43, with a wider diameter barrel and more weight concentrated at the end of the bat.

In the comparison above, you’ll notice the barrel of Aaron’s A93, swung in 1957, is larger, more endloaded, and squared off at the end.

It was with this Grown-Ass Man bat that he solidified himself as “Hammerin’ Hank,” hitting 17 more bombs than his previous career high, leading the MLB with 44 in his only MVP season. He capped it off by bludgeoning the Yankees, slugging .786 with seven RBI in seven games to secure his one and only ring.

In ’58, Aaron made an adjustment. He placed an order matching the standard measurements for the 21st century pro, a 34/32, for the first time. In the first-ever televised “Home Run Derby” filmed in 1959, Aaron’s opponent Al Kaline recalled that pitchers would say never to pitch Aaron away, otherwise “he’d knock you off the mound.” Knowing this, the 34/32 might have been Hank’s counter-attack to being pitched hard inside.

Hank never feared the fastball, though. He was once quoted, “I looked for the same pitch my whole career, a breaking ball… I never worried about the fastball. They couldn’t throw it past me, none of them.” On the flip side, in the same year Aaron ordered three 36″/35 ounce monsters, too, presumably for the slop-throwers.

In the same season, Aaron made his first order for the S2 model with a “Sanded Handle,” a 35.5/33. The bat had become a popular one with three fellow future 500 Club members, Eddie Mathews, Ernie Banks, and Willie Mays. Aaron’s power numbers dipped, but he upped his average in another MVP-caliber 1958 season while carrying his team to a second consecutive pennant.

While Mantle and Maris chased the Babe for the season HR record, Aaron settled into his own decade of destruction. In ’61 Aaron found what would become his favorite model for the rest of his record-shattering career, the A99. It was based off Louisville Slugger-competitor Adirondack’s #63B, which Hank mixed in occasionally, and Hank’s order specifically called for “Wide Grain” wood and a 35/33 length/weight.

Update: According to Hank’s H&B bat order form, Hank specifically asked for wide grain all the way back in 1956, but reiterated that request in 1962.

Another update: We received images of a Babe Ruth R43 and Hank Aaron A99 side-by-side from Louisville Slugger Museum. Aaron’s handle may be a bit thinner, but they do look very similar.

After a one-season experiment with another Adirondack-copied Louisville Slugger cut, the A115, Hank would go on to set all of his yet-unbeaten records with the A99. He leveled off the length at 35 inches with mostly 33 ounce weights, and insisted on wood with “Wide Grains” in every single bat order thereafter. Tony Gwynn is known for his love for wide grains, too, nicknaming his own Louisville Slugger “Seven Grains of Pain.” (See our article “Some Thoughts on Wood Grain, Tony Gwynn’s Seven Grains of Pain.”)

After reaching 713 at the close of the 1973 season, one homer shy of The Babe, the 40-year old Aaron deflected hatred with a soft-spoken grace, taking aim at the record at the start of his Atlanta Braves’ 1974 season. It was the culmination of an unparalleled career, but a frightening time for Hank, who was receiving hundreds of thousands of letters, many overtly racist with threats on his life.

Unwavering despite the hatred, The Hammer took a 1-0 Al Downing cookie to deep left center, dethroning Babe Ruth as Home Run King with his 715th home run. Never a collector, Hank retrieved the historic Louisville Slugger A99 ash 35 inch, 33 ounce bat with the wide grains and kept this one for himself.

In November 1974, Hank was traded by the Atlanta Braves back to where his career began, but for a new team, the Milwaukee Brewers. According to Kinunen, during the 1975 season, Hank was photographed swinging Adirondack bats along with his trusted A99, making his last few trips around the bases where it all started for the legend.

In 1976, Hank would hit his 755th and final home run with a Slugger A99. It had a unique Bicentennial logo that H&B added to all their bats that year in celebration of America’s 200th birthday.

Hank’s 755 home runs stood for decades until the steroid era, and for many of us, he is still the King.

Grab a bat, Hammer. You’re batting 3 in front of Ruth tonight! I’m sure the ball really flies in heaven… if only we could be there to see it!

Update: Thanks to the Louisville Slugger Museum (IG: @slugger_museum / Twitter @sluggermuseum), here’s a look at Hank Aaron’s actual bat order forms from 1952 through his career!

In the top left, the word “Seminick” is referring to the player model that Hank asked H&B to copy for his first ever bat order, which was Andy Seminick’s D89.