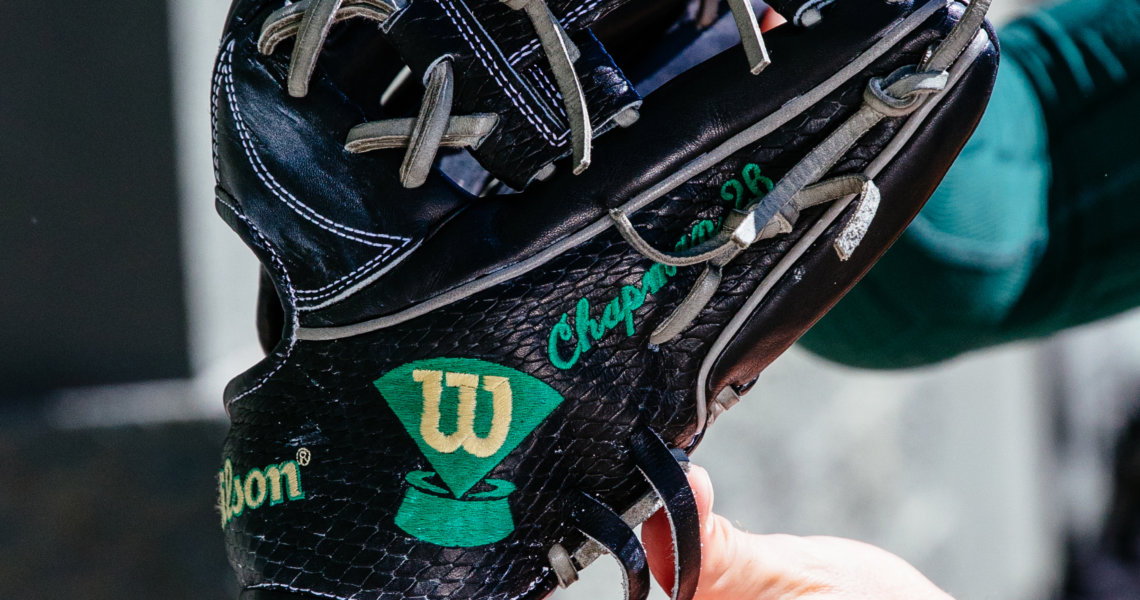 WPW’s 2020 Cactus League tour began with our home team, the Oakland Athletics. The same site of our Big League debut, Will Ferrell Day.

Will Ferrell did not appear, but Matt Chapman’s new Wilson A2K is bigger news in our world, anyways.

Chapman’s glove breaks new ground for Wilson. While Chappy’s got two Gold Gloves and two Platinum Gloves, these are Rawlings-sponsored awards, and he’s also got a Wilson Defensive Player of the Year award (2018).

To capitalize on that moment, Wilson did something we’ve never seen done before for any player… instead of the Wilson “W” by itself, they embroidered it within the silhouette of the Defensive Player of the Year trophy.

WPW got to speak with Chappy about the glove (Locker Tour to come so you ought to subscribe), and he was so excited about the glove that he said he’s looking to game it as soon as possible.

Chappy was especially pumped about the stamping inside the glove, which is an outline of his “how-low-can-you-go” defensive stance.

Until then, shop his most recent game model at Dick’s, another sick glove.

Chapman also dropped his college teammate Nick Hurtado’s initials and number on the ring finger. Hurtado died of cancer before he could realize his dream of making the Bigs, so Chapman brings Nick to the field with him every day, in his heart.

There were others playing baseball on this day, including the other Matt, Matt Olson, who brought out his trusty Rawlings Pro Preferred PROSDCT with the gold labels.

Olson has stayed with the Under Armour Yard in spring. In our first impressions of camp, we haven’t noticed many new cleat styles, but there’s nothing wrong with getting MLB cleats at good prices. Dick’s has the Yards for $55-$85 and Baseball Express has the metals for $20 less than Dick’s.

Patient A’s fans will be happy to see Jorge Mateo, who was a big piece of the 2017 Sonny Gray deadline deal and will be battling for the 2020 vacancy at second base.

If the second base job was a battle of swag, it feels like Mateo would be the front-runner. He’s rocking Franklin CFX Pro batting gloves ($45-$50 custom at FranklinSports.com) in white with yellow trim, and his double-strap Evoshield had double the names ($75 at Evoshield.com) just in case Bob Melvin forgets who slugged .504 in Vegas last year. The adiZeros ($99 at Dick’s in many colors) are a good fit for the Oakland whites.

Comment below or tag us on the WPW app! One lucky commenter in the month of February will win a $250 e-gift card to Dick’s Sporting Goods from WPW.

What do you think about Chappy’s new piece? What are you seeing at Spring Training? I’m always trying to encourage more community as its much better that way and we are always learning from you all. So… the best comment on WhatProsWear.com or WPW app for the month of February will win a $250 gift card to Dick’s Sporting Goods. We’ll make an additional donation of $5 to Dick’s Sports Matter program to help give every kid a chance to play. If you get the WPW app, you can tag @whatproswear. Going forward, we’ll name a community winner every month and he or she will get a prize from us. 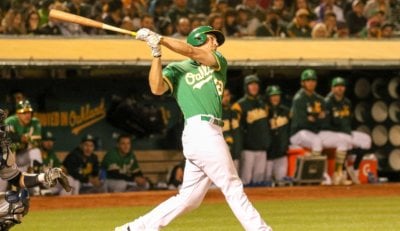