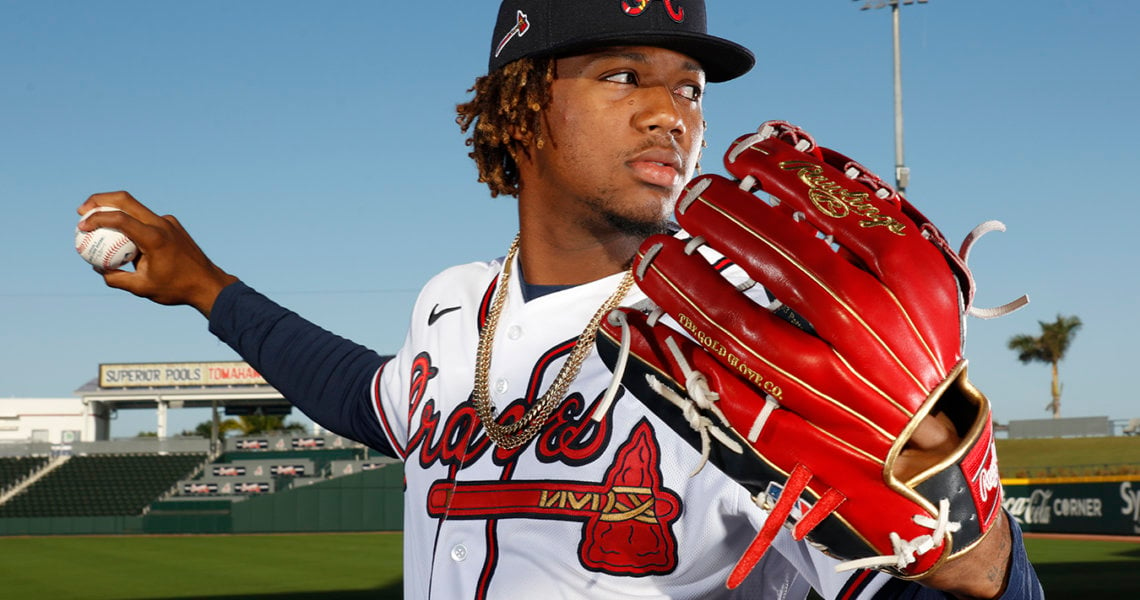 “Summer Camp” has brought an avalanche of new gear. Here’s what has stood out to us so far. Please comment and let us know what we missed—you’ll be entered into a custom cleat giveaway for every comment (details at the end of this post).

Glove Guru Jay (@picklethebeast417) mentioned Easton in his write up of “12 GLOVES I NEED TO SEE IMMEDIATELY” but we have already seen a few new pieces he didn’t mention that caught our eye.

Alex Bregman made the switch to Easton a few years back and despite an offseason that has turned Bregman into one of American sports’ biggest villains, Easton has stuck by his side.

Bregman has gone with loud colors and new materials in the past to create some eye catching looks. This year’s model, the Professional Reserve AB2, looks to be just as flashy in Astros’ navy blue and orange. A version of the AB2 can be found at Dicks Sporting Goods.

An Easton Baseball promo video shows off a close up of a couple more Easton Pro Reserve options for Bregman to pick from this year.

Ketel Marte stormed onto the scene last year, finishing in between Anthony Rendon and Ronald Acuna in the NL MVP voting.

The super utility man has seen time in the infield and outfield but his new infield piece caught our eye.

While his new Easton Professional Reserve is less flashy than this red and metallic silver C21 from 2019, the blonde and red combo is simple and classic. That one with the teal laces is also pretty sexy. The closest alternative to Marte’s gamer is the 11.5″ Easton Professional Collection Hybrid Series available at Dicks Sporting Goods.

Giancarlo Stanton appears to be attempting to blend in with the other skyscrapers in New York. The linebacker… er, outfielder is working out with his trusted Rawlings Heart of the Hide PRO27HFB. This one has a New York theme to it with navy, gray and silver touches. Stanton’s bear paws require a 13″, but you can get this beauty for $360 as a 12 3/4″ at this link.

One of the most electrifying players in baseball is now DRIPPING in even more swag. Ronald Acuna Jr. put the baseball world on watch last year as he tore up the Big Leagues at 21 years old.

Rawlings gave us a close up look at Acuna’s new Rawlings PROS3039 in a LOUD Braves-themed color combo. You can get his exact game model through the Rawlings.com customizer.

Acuna’s glove is flashy but it’s far from the only thing that makes him one of the most swagged-out ball players in The Show. 100% shades are sweeping the League, making a big splash with Acuna in their Speedcraft style. He pairs the stunners with dreads and a couple of gold ropes to achieve full Lil’ Jon swag.

Another young gun itching for baseball to return is Fernando Tatis Jr. Injuries shortened his 2019 season but he is back with some new swag. As Mizuno’s newest poster child, Tatis joins some elite defensive company with the likes of Nick Ahmed, Andrelton Simmons, and Didi Gregorius. Tatis is seen here flashing his new black 11.75″ Mizuno Pro Series GMP2-600R, available through Dicks Sporting Goods for $350. Like we saw with Acuna, 100% sunglasses make another appearance on a young stud.

By the way, have you seen our new content series featuring Tatis, “WPW Origins”?

Tatis’ Mizuno glove is buyable, but what Mr. Smile shared on Instagram is still a “player exclusive.” The Platinum Glove Award winner dropped some close ups on some MAJOR HEAT coming from Rawlings.

We saw these synthetic backed gloves earlier in the year, and at that point it was a mystery. Now, Lindor has given us a name for the half-synthetic, half-leather glove: “Rev1x.” Lindor’s new Terminator-esque gloves have certainly caught our attention.

While we caught glimpses of infielders rocking the Rev1x, Tommy Pham is the first guy we have seen rocking the outfield version. His Franklin Neo Classics and Victus lumber are noteworthy but pale in comparison to the Rawlings mystery glove. As we learn more, you will too!

☝️ Home or 🤘 Away? 1st look at @yankees SS @gleyberdavid’s 2020 🔥 Thanks for sending them thru Gley! PLAYERS DM US FOR FEATURES

A few days after that, Gleyber posted this video:

The cleats in this video from Gleyber are the new model of Huarache in a similar exclusive outfit, a model that is now available at Dick’s Sporting Goods for $50-$90 as a cleat and turf.

While not quite as special as Torres’ pinstriped spikes, Willson Contreras’ gator print Cubs Nike Alpha Huarache Elite 2 mid cleats are no slouch.

Eastbay.com seems to be your best bet to find a pair for yourself.

Nomad Customs hooked up Miami infielder Jonathan Villar with some “305 Flow.” Villar will have a home, away, and two alternate pairs of South Beach spikes to pick from.

As always, we see a lot but simply can’t see everything. If you see some gear we missed, let us know! Please comment below. Comments with a valid email address will get you entered to win the custom cleats of his or her choice by Mookie Betts’ custom artist, @ikb20_customs.

Winner’s provided e-mail will be contacted after July 31. We can ship to US/Canada addresses only. 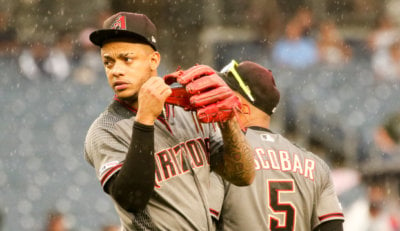