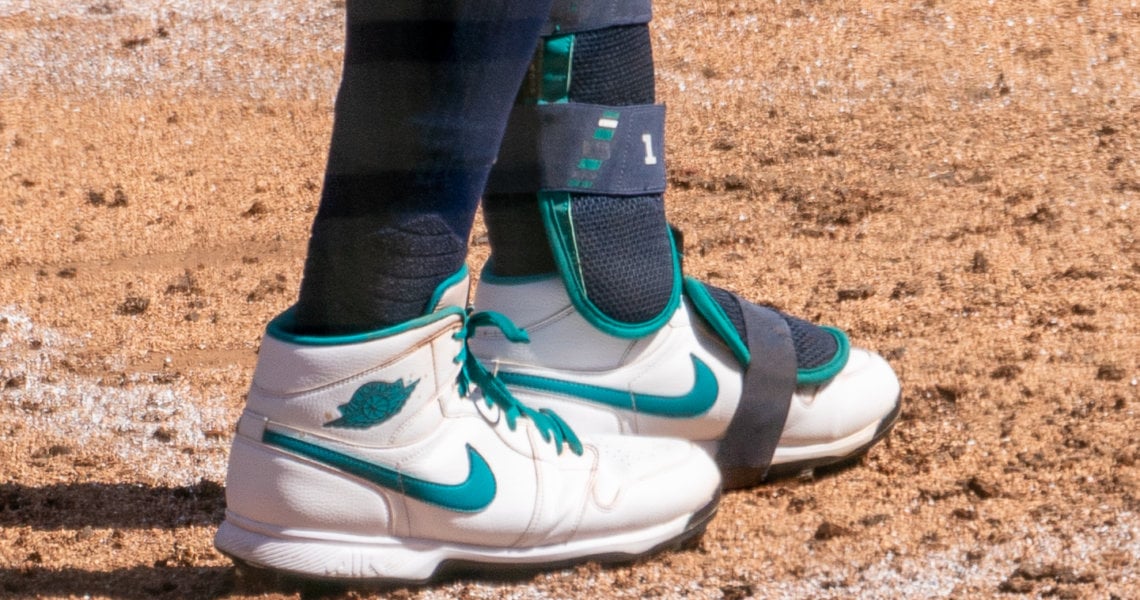 There were a surprising number of memorable rookie performances in 2020, including Luis Robert‘s monstrous 5-tool display, Jake Cronenworth adding to an already great Padres infield, and Alec Bohm leading a stacked Philly lineup in batting average (by 54 points)… but two stars, Kyle Lewis of the Mariners, and Devin Williams of the Brewers, shined brighter than the rest.

What gear helped make them Rookies of the Year? Lets take a look.

Kyle Lewis is the first Mariner to win Rookie of the Year honors
since the legendary Ichiro Suzuki in 2001. Lewis was the 11th overall pick in 2016 out of Mercer University in Macon, Georgia. In his junior season, Lewis slashed a ridiculous .395/.535/.731 with 20 bombs en route to college baseball’s highest honor, the Golden Spikes Award.

Kyle Lewis is one of the few winners in the year 2020. He shined at the plate and in center. In the abbreviated season, Lewis hit 11 homers and drove in 28 runs. Throw in a plethora of highlight reel catches and Lewis’ made his ROTY campaign unanimous.

As far as we know, Lewis is the first rookie we’ve ever seen with a Jordan deal on the diamond.

Out of all his crazy options this year, the all white with Mariner green accents was the winning combination.

Dick’s has the all black version on sale in just about every size for $96.

Lewis’ leg guard is one of the most popular in the MLB, the Evoshield PRO-SRZ in navy blue. While his exact colorway isn’t available, a really nice custom alternative that we made can be had for $100 from Evoshield’s website.

Sadly, those Jumpman batting gloves are a pro exclusive.

Nike’s closest alternative is the Trout Elite 2.0, available in a patriotic color combo for $65.

Lewis generated an .801 OPS with a Victus KL22. According to our recent post, this model features a large and long barrel similar to the i13 and AP5 barrel profiles. The barrel is connected to the flared knob by a medium-thin handle. This medium end-loaded bat isn’t available, but the closest alternative is the TATIS23, available for $180 from Victus.

Lewis displayed a wide array of skills this season but his numbers at the plate were what sealed his ROTY campaign. Not afraid to choke and poke either!

Defensively, Kyle Lewis put the world on notice. He manned center using a Rawlings Pro Preferred PROS3039-6. The PRO303 is one of the most popular patterns for outfielders at the Big League level. Check out our Top 4 Outfield Glove Patterns post to learn more about some of the top OF patterns in The Show, including K-Lew’s model.

Kyle Lewis made his case for play of the year when he robbed Ramón Laureano of a sure bomb with his PRO303. Lewis’ gamer for 2020 is a stock option readily available from Dick’s Sporting Goods for $360. While not as flashy as some custom options, the rich tan base with navy blue accents is a nice mix of custom and classic that pairs well with Seattle’s color palette.

Over 27 innings pitched, Devin Williams allowed one measly run. That’s an ERA of 0.33. He tallied an unfair 53 K’s in those 27 innings.

Williams had the pedigree, having been drafted 54th overall out of high school, but he had to battle back from Tommy John surgery in 2017 to finally take home ROTY honors in 2020.

Much of Williams’ success in 2020 came on his changeup/screwball dubbed “The Airbender.” The physics defying arm-side break makes it look more like it should have been a lefty’s curveball. The wiffle ball movement had some of the best hitters in the world swinging and missing by feet. Even his own catchers look like they struggle to CATCH the butterfly.

Devin Williams’ leather is a subtly flashy beauty. Williams uses one of the most popular models at all levels, the PRO200. Williams’ primary gamer is a navy, 12″ Rawlings Pro Preferred PRO206-4.

This modified trapeze web has camel laces to add a hint of classic to the blue leather base. We created Williams’ gamer on the Rawlings customizer for $480.

Williams trusts adidas Icon V cleats to keep him planted on the bump. The Icon V is getting harder to come by, but adidas’ website still has a variety of colors and sizes available for $108.