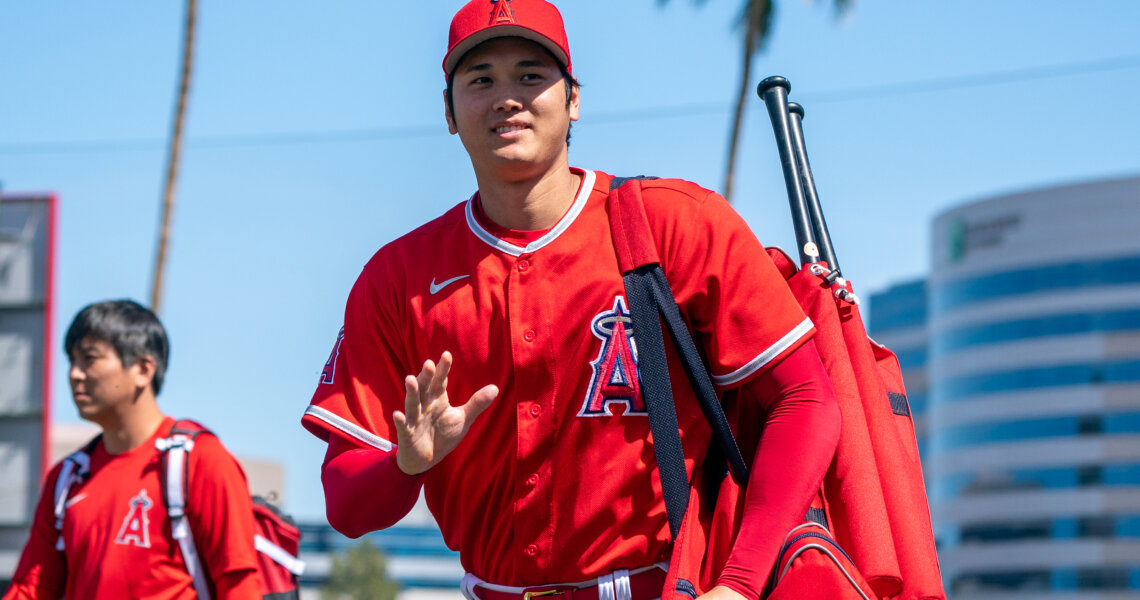 After a two-week MLB blitz, here’s what you can expect on Opening Day 2022. Also: Locker Tours from some great players will be dropping in April. Tag us in more swag on Instagram.

The most exciting team in baseball, the Blue Jays, will not disappoint. Bo Bichette is rolling with a Rawlings REV1X with a green geometric pattern.

Unlike Francisco Lindor, Bo seems content with this one and doesn’t switch it out every game. As soon as I say that, though, he’ll probably be wearing another one. That’s the nature of this new glove, which comes game-ready out of the box. Shop at Baseball Express, Dick’s, and Rawlings. Dick’s has an exclusive “cloud” design that Bo wore at one point last year ($400).

Bo is featuring his personal brand on his Junk headband and around his neck. This is SHOW swag of the highest quality. As far as we can tell, this headband isn’t yet available, but Kolten Wong and Fernando Tatis, Jr. have a few custom bands up on Junk’s website right now.

George Springer in Rawlings was a surprise, as he was a long-time fan of Nike’s V360 synthetic glove, now a relic to glove history. His Rawlings PRO3319 pattern is new, an adaptation from the infield PRO31 pattern that features dual welting.

Springer’s Heart of the Hide 12 3/4″ glove is an absolute dime and its available exactly like Springer’s for $400 at Rawlings.com.

Vladdy wore a pair of Jordan 10 cleats, but I expected more. They were pretty simple and about 50% hidden by the bellbottoms.

The Angels gear bag with the built in bat holders is next level. There’s lots of backpacks out there, but the duffle is standard in The Show. Ohtani’s Asics Gold Stage bats are well secured with this ingenious modification.

Mike Trout has settled into a predominantly black with red and camo trim style for his Rawlings gloves. Its been that way since he went back to Rawlings in 2016.

While Trout’s glove, which features pinky and thumb camo mesh trim and a one-of-a-kind stitched autograph on the thumb, is a player exclusive, you can get close via Rawlings.com custom builder at $530. Go Heart of the Hide leather to get the price under $400. The shades are the Show X3 Elite, available at Dick’s for $180-$205.

While we wait for new cleats to arrive (, the Trout 7 remains the most searched for cleat on WPW. It looks like Dick’s reloaded on some colorways at various price points.

Anthony Rendon’s Marucci Model 53 11.5″ glove was a well-weathered classic in all tan. We couldn’t find an exact match but you can shop Marucci gloves at MarucciSports.com.

While we were on-field, Rendon handed this Marucci glove off to a coach, presumably to break it in. Maybe the next gamer?

Charlie Blackmon always brings it. He’s one of MANY guys rocking G-Form guards this year.

Cody Bellinger, too, is wearing the standard G-Form Elite elbow guard, available at Dick’s Sporting Goods in a variety of colors for $50-$55. G-Form’s growth among MLB players will be very apparent in 2022.

Belli is said to be tinkering with his swing, but one thing that needs no tinkering is his outfield defense. He’s got the gold labels now to prove it. Gavin Lux even told me that he got the same exact glove—imitation is the sincerest form of flattery.

Kris Bryant in purple! The pink adiZero batting gloves are a nice touch. Eastbay has these at $60 in standard colors.

Chappy dropping the head in blue.

Javy Baez with the Old English “D” on his chest is a bit of a surprise, but the SSK remains his favorite leather. He wore Rawlings gold labels last year WITH PERMISSION from SSK, because it was a dream of his, but Javy is not changing his allegiance. SSK has reappeared for sale in the USA at SSKBaseballShop.com. There are some Javy models for those brave enough to wear the smallest glove in MLB at 11.25″.

Trea Turner won a batting title in 2021 as a Dodger, so he’s not exactly “new,” but its still kinda freaky to see him at the top of this lineup. He and Mookie are going to be a problem. Oh and now they got Freddie too. To put it in perspective, Belli’s probably going to hit 8th.

Trea had good things to say about the 100% Speedcraft SL shades he was rocking, even though he told me he didn’t love the flashiness. He said the performance benefit of the lens, which have excellent visibility, is why you’ll see him rocking them when the sun’s up. Get Trea’s exact 100% Speedcraft SL at 100percent.com for $185.

Seiya Suzuki brings a ridiculous offensive resume from the NPB and some more Asics swag like other NPB superstars before him.

The signature on the heel is a classy touch.

As did Gosuke Katoh, Jays infielder and long-time WPW guy. He’ll make his MLB debut in 2022.

The craziest cleats might go to Yoshi Tsutsugo, who wore these wild ones—brand unknown.

TA7 Leads the League in Fun

I’ve seen a few of Tim Anderson’s games. He’s the toughest out on the field most nights, but he’s also leading the league in fun. I hear him getting rowdy in the dugout. Chattin’ up everybody on the field. Singing, joking, shooting finger-guns.

Anderson’s cleats are unbelievable. They’re a player exclusive version of the Lunar Vapor Ultrafly, and it doesn’t get cleaner.

He’s even got his children’s names on the back heel.

Brendan Rodgers looks like he’s been living in the gym. Popeye the Sailor Man status. His REV1X, a Best of WPW finalist, is also quite strong.

As a result of an elbow sprain in the offseason, Cavan Biggio is wearing an advanced Bauerfeind elbow brace ($200) to prevent hyperextension on his left arm. Its more involved than just a standard elbow sleeve as it uses a wire tension system to slow down the arm before the risk of over-extension.

The Lourdes of Hair.

Jose Berrios, Jays Opening Day starter, will take the ball with an Under Armour glove. Its a nice piece, and I was pleasantly surprised to see that Dick’s offers a really nice selection of UA gloves, all at $350.

Willson Contreras’ gradient fade on his Nike gear is next level. Just a beautiful thing. And no, its not available.

Pay close attention to the shoe game in Chicago, as Clint Frazier and Marcus Stroman have entered the chat.

Same goes for the cleats. Jordan baseball cleats have gone missing in 2022, so its up to eBay to deliver for the Jordan followers.

The PitchCom device (read more here) was just formally allowed by MLB. Expect to see it more and more as it’s expected to quicken pace of play and fight sign-stealing.

What’d we miss? Any new gear happenings we should know about?