Bryce was busy becoming a father during Players’ Weekend, so he had to hold these exclusive Harper 4 cleats back until the Monday after.  Harper hit a clutch bomb to help the Phillies beat the Pirates while wearing these Harper 4s, which were made from scrap materials left over from past Under Armour projects. 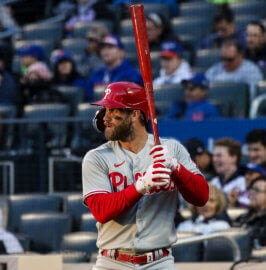