Although we are a little over a month until the full 2018 Wilson Glove Line releases, Wilson released a few gloves to whet our appetites for what’s to come on August 1st. The one to have without a doubt is the Wilson A2000 1785, a glove that features one of Wilson’s new and improved set of patterns.  Its a good one for WPW, not only for its sheer beauty, but because it is the EXACT glove, colorway and all, that Carlos Correa wears on the field. Here are five things you need to know about this new stock Wilson A2000 1785 (scroll down to get full details on each point): 1. It is the Carlos Correa Game Model, and Correa Actually uses it

As part of their Glove of the Month program, Wilson released Carlos Correa’s former gray/navy blue/orange game glove in January 2016. At that point, it was his game glove for the entire 2015 season and it was one of the most appealing gloves coming out of the pro ranks.

Fueled by the public’s interest in the Glove of the Month Carlos Correa Game Model, Wilson re-released the same exact gray/navy blue/orange model as part of their 2017 Glove Line. However, he was long done wearing the glove by that point and had moved onto his pre-MLB gamer.

For their 2018 line, Wilson is releasing a glove that Correa currently games.  Although it bears the CC1 labeling, the new stock Carlos Correa Game Model is identical to the one he uses in the field.

This is a black/red/blonde/white beauty and, though its not Houson colors, its exactly what Correa wears for the surging Astros.

After using the 1787 pattern for an extended period of his time in the Major and Minor Leagues, Correa made the switch over to the new 1785 pattern at the beginning of the 2017 season.

Although it is easy to decipher the Wilson A2000 1785’s 11.75” length and new-to-Wilson laced cross web, Wilson introduced a new technology that is much more complicated than length and web style specifications: Gap Welting.

Put simply, Wilson’s new Gap Welting technology adds a notch between the index and middle fingers to create a wider, deeper, and rounder pocket design. Due to this technology, you will get a glove that squeezes much easier around the ball and secures the ball much better. Even though Wilson’s materials are already superb, each year they somehow find a way to better the quality of their leather, laces, and the other materials that you cannot see or feel.

For starters, Wilson has taken their 2017 “Pro Stock” leather, their signature USA steerhide leather, and made it firmer and tighter-grained than ever before. The result: a stronger overall glove that holds it shape for a longer time than previous models.

In addition to a slight upgrade in leather quality, Wilson improved the quality of their formerly subpar lacing. Although the lacing still trails behind Rawlings’ lace in long-term durability and suppleness, Wilson is taking a step in the right direction to fix an issue that Wilson gloves have had in the past. 4. Correa’s 1785 is a Great Glove for Shortstops and Third Basemen

With a pattern that features a deep pocket and a larger 11.75”, the Wilson A2000 1785 is an excellent option for third basemen looking to pick it at the hot corner or shortstops striving to turn wizard-like double plays.

Factor in the high quality materials and the creative colorway, and the Wilson A2000 1785 becomes a top option for third basemen or shortstops looking for a glove with the total package.

5. This Release Comes Just under Two Weeks after a similar Astros-themed 1785 model was released

On the first day of this month, Wilson released a pair of pro model limited gloves. The first was a Dansby Swanson-designed Wilson A2000 1787, and the other was a bit more of a surprise, a Wilson A2000 1785: When that released, we expected it to be a one-and-done type of deal, so we’re shocked to see a second 1785.  Now there are two 1785’s on Wilson’s website, but they both may be gone soon because this thing is a PIECE! 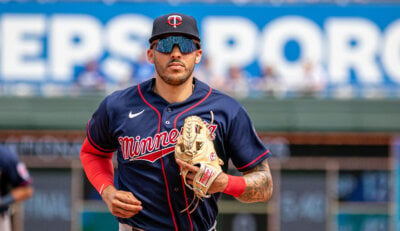