The difference-maker of the 2012 ASG, the M9 by Louisville.  Source: Jamie Squire/Getty Images North America

Here at WPW, when it comes to bringing you the most accurate gear-related information, we leave no stone un-turned.  If you don’t believe me, ask our bat man Rocky, who took the time to go back and watch the 2012 All Star Game so we could report back to you with the bat tally.

Before we get into this, though, I did want to mention something about the previous post on this topic because there were some justifiable disagreements; the reason why is that Edwin Encarnacion came up his first AB with a Louisville.  That would have made it a tie between them and Marucci, however, I still gave Marucci credit and here’s why: this is the first time we’ve ever seen Edwin swing anything but Marucci, and since the ASG he’s been swinging Marucci. So why would he randomly go with Louisville?  There was a reason other than hitting that persuaded Edwin to go up with a Louisville that AB. Prince Fielder (profile) swung the vote in Marucci’s favor in 2013, but in 2012 he swung his Hoosier, a bat he often swings in the regular season and won the 2012 Derby with.  Michael Bourn swung a MaxBat and Carlos Gonzalez (profile) swung a bat from Americas’ Bat Co.  Billy Butler swung a Mizuno.

Victus, a brand we saw more of last season than 2013, was Adam Jones (profile) favorite brand for a little while.  He has since switched back to Louisville. Aside from Napoli and his patriot-labeled Chandler, Melky Cabrera (profile) actually swung a Chandler in his first AB, later switching to a Louisville M9 when he did most of his damage, a 2-run homer off Matt Harrison in the 4th. Rawlings showed three bats in the 2012 ASG.  AL Catchers’ Joe Mauer (profile) and Matt Wieters (in his first AB, righty) swung Rawlings, as did Chipper Jones (profile).  The way you can tell is the ring around the middle of the bat, Rawlings’ signature. **Bryan LaHair couldn’t be tallied because they never gave us a good look, we just know it wasn’t Louisville.  In other news, who the Fukuoka is Bryan LaHair?

The margin of victory here is what is most interesting to me, because before the last couple of seasons, there really hasn’t been much competition for Louisville in the modern era.  That would lead you to believe that this 2013 game is likely the first time any bat company aside from Louisville has held the top spot.  Imagine that!  A 79-year streak of dominance that few companies in ANY industry can claim, snapped by a guy who just wanted to make a wood bat small enough for his 8 year old son.  This, boys and girls, is a true story about the American Dream.

Thanks to Rocky for the research. 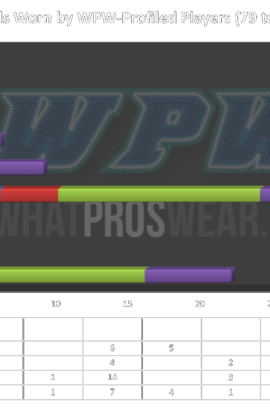