It may be obvious at this point but WPW has recently been given the opportunity to photograph Big League games (thanks to the Oakland A’s and SF Giants organizations), and its been an experience that I haven’t taken for granted. People say that if you idolize someone, it may be best that you never meet them, because it may turn out that they’re not the ideal walk-on-water superhero kinda guy that he is in your little head.  That’s probably true for some guys, but in my few experiences on the field, its been the exact opposite. Guys like Pedroia, David Ortiz, Mike Trout, Albert Pujols—I’ve been amazed to see that those are the guys chumming it up with the security guards and the lifer photogs (like Michael Zagaris above) and the rest of the “commoners” like us.  They know them by name and seem like old friends. That’s not to say they’re treating it like a Sunday 18 at the country club—not by any stretch.  After Mike Napoli made a big inning-ending catch, Pedroia was yelling in his face like it was Game 7 of the World Series.  He wants to win just as bad in early May. The same goes for Papi, who greeted and joked with the A’s groundskeepers and security guards like they grew up in the same neighborhood.  He was the mayor.  Later in the night, during a pitching change, Ortiz waited on deck while a heckler said something Papi didn’t like.  He stared the poor bastard down for probably 15 straight seconds.  Imagine getting stared down by David Ortiz for that long—I’d lose a few years off my life.

This was right after Hanley gave him a pep talk: Papi humored Hanley, but I sensed he was more interested in hitting angry, and the heckler gave him just what he needed.  He went up and ripped a ball down the line that Max Muncy made a full-extension Superman dive to catch. The moments just before first pitch might be the most interesting of all.  You see the superstitions, like Papi picking out his murder weapon while Shane Victorino straddles them (lead photo above), or 3rd base coach Brian Butterfield bestowing the Tuf Skin upon Hanley Ramirez like it has mystical powers. Papi talked hitting with everybody.  Everybody listened. Hanley and Victorino were bickering over bats while they stretched.  Victorino brought out one of Hanley’s Slugger HR318 bats for BP (and the game), and Hanley, who (based on the other guys I saw swinging his bats) seems very generous, got a little protective of his Maple stash.  Victorino said “I only took one!”  Hanley said, “Yeah but you took the BEST one!”

On a related note, even in the pros nobody likes to stretch. The overwhelming topic of conversation: baseball. Next up this weekend, Chicago White Sox. 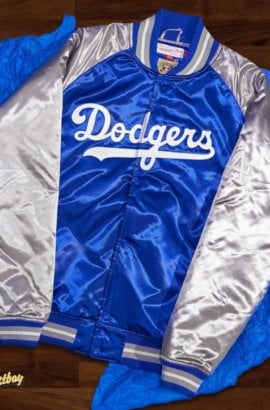