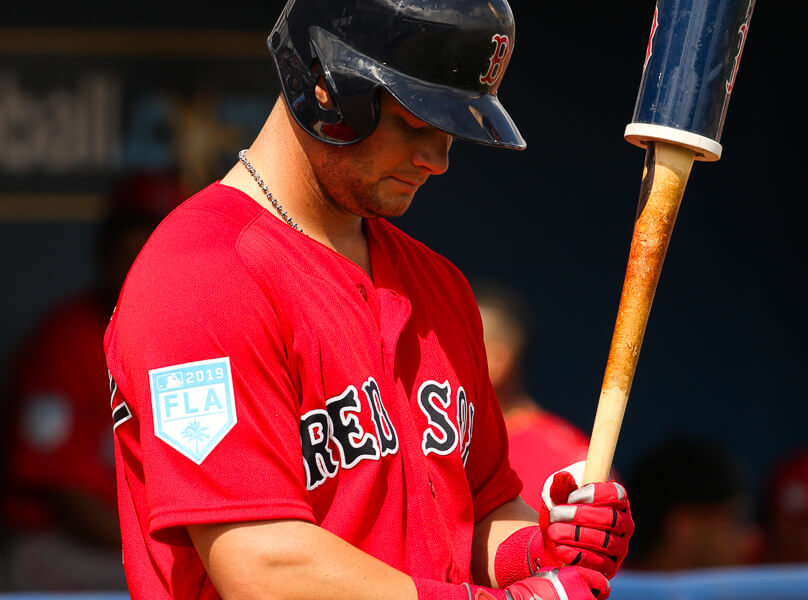 The World Champion Red Sox recently visited the Rays’ Spring Training home Port Charlotte, Florida and WPW was on hand.  With reigning MVP Mookie Betts out of the lineup, Andrew Benintendi led off, wearing Evoshield Evo XGT batting gloves, which you can get exactly like Benintendi at this link. Benny Baseball wore a Wilson A2000 1799 that he may be getting ready to game during the regular season.  Its a lot like his previous YP66, just without the Y-Web.  This is a custom glove that he made last year, and you can get it just like Benintendi at this link. Benintendi swung his favorite Chandler AB16 Maple bat.  Under his baggy “knickers,” Benintendi wore Under Armour Yard PE cleats that had stars on the liner fabric and some type of patriotic logo on the tongue. Unfortunately we couldn’t really make it out.  You can customize the UA Yard here, or shop stock options on Baseball Express.  Benintendi wore matching Stance Diamond Pro OTC socks and an Evoshield PRO-SRZ leg guard.  Expect to see the PRO-SRZ show up on Evoshield.com soon. Reigning Cy Young winner Blake Snell did not throw in the game, but got his work in on the practice fields earlier in the day.  Snell wore the extremely popular Nike Alpha Huarache Elite 2 lows with Stance Rays Pro Crew socks. Snell is still rocking that smooth Rawlings PROS12-3KN glove that made our list of “prettiest Rawlings gloves” last year. Jose De Leon’s Wilson A2K CJW (CJ Wilson model) was a huge hit on our Instagram page.  You can get this exact glove at this link. Diego Castillo was breaking in a similarly “tropical blue” 44Pro glove that we did our best to re-create via 44’s custom builder.  44Pro’s customization options rival any other company’s and for an outstanding price that is around $200 or less. When 44Pro gloves started popping up in the MLB a few years ago, it was pretty much exclusively pitchers.  Now, they’re showing up on position players like Rays new third baseman Yandy Diaz.  Diaz’ 44Pro looks like a copy of Ian Kinsler’s Nike SHA DO.  Diaz’ hand couldn’t have been much smaller than the glove itself, though we’re not sure the measurements. Daniel Robertson did it all on this day, going 2-2 with a bomb, but it was his glove that stood out to us.   Update: Robertson’s bangin’ little Wingtip is an 11.5″ Heart of the Hide PRO200WT-2JC.  Smokeshow.  You can get this glove here.  Oh and the shades are Nike Hyperforce. Robertson swung a Marucci maple, wore a white Nike elbow guard and the original version of the Nike Alpha Huarache cleats with speckles. Red Sox prospect CJ Chatham is rocking a sharp Marucci custom with some subtle flair, with the “100” emoji and “The Kid” embroidered on the thumb.

It was a V-Web, and you can get pretty close to Chatham’s exact glove at this link. Brock Holt swung a Victus Axe bat, and on his feet were a clean pair of New Balance 4040v4 PE cleats.  The all grey with a little pop is a clean look for a Red Sox player. Speaking of all grey with a little pop, Holt’s Franklin Pro Classics were a perfect match for the cleats.  Get a very similar pair here. You can achieve something like Holt’s 4040v4s on New Balance’s custom builder, but there are only 3 options to choose from for the “N” logo, which is disappointing.  Shop the 4040v4 stock options on Baseball Express. A fan made a nice play and Brock was the first to congratulate them for it.  As a fan, this has got to feel good. The Harper 3 has shown up more often in spring than we’d seen during last year’s regular season, especially on young players like Austin Meadows.  Eastbay has the most options for these, including Meadows’ lows, but not in this simple white and navy colorway, unfortunately. Tommy Pham wore the adidas adiZero Afterburner Vs in navy and white, available at this link and the Franklin Neo Classic II in navy/white (shop this style here). In the clubhouse, I asked Joey Wendle, a .300 hitter as a rookie last year, how he goes a full MLB season without batting gloves.  He showed me his hands, and they were RUGGED.  Beat to hell.  Spring Training is his time to build up the calluses that he’ll need for the season.  Its painful, but when the deed is done, it provides the ultimate bat control. Flamethrower Ryne Stanek had a unique colorway to his Nike Alpha Huarache Elite 2s, which we made up here.

Who had the best look?  Let us know in the comments. 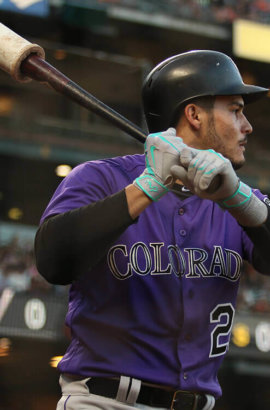