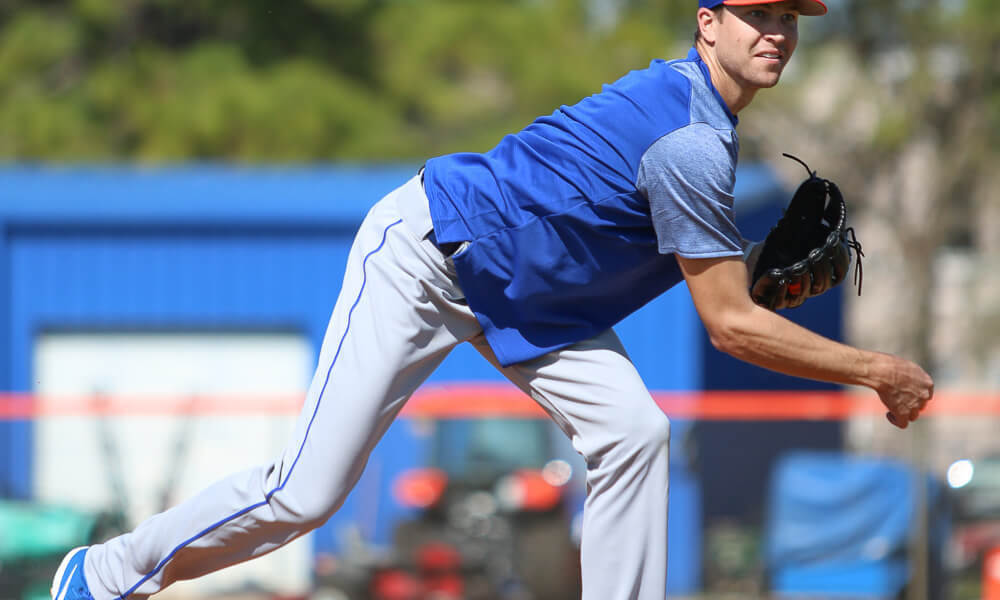 Cy deGrom and the New York Mets head into 2019 after one of the most exciting off-seasons of any team, adding Robby Cano, Edwin Diaz, Wilson Ramos, and Jed Lowrie among others.  With an already strong rotation, the team and its ownership will expect to contend.  WPW was on-field ahead of the full team’s report date, but we still picked up some new swag for the fiends. Jacob deGrom, after an utterly insane 2018 season in which he pitched to a 1.70 ERA, lowest since Zack Greinke’s 1.66 ERA in 2015, and only the 10th sub-1.80 since 1970.  In camp, deGrom wore Nike Alpha Huarache Elite 2 Low cleats, a cleat that seems to be Nike’s workhorse for the new season.  It is EVERYWHERE.  Eastbay’s got these in MCS (like deGrom) while NIKEiD offers them custom. The other new Nike cleat we saw was worn by Noah Syndergaard, the Vapor Ultrafly 2.  This cleat features a hybrid plate and is available on Eastbay. Here’s a closer look at the new option from Nike.  We also caught some of the Michigan-Binghamton game at the main field later in the day, and these were well-represented. The legend of the Nike SHA DO glove line lives on with deGrom and Syndergaard.  The SHA DO line is still floating around on eBay. Zack Wheeler joined deGrom and Thor for PFPs in the new Under Armour Yard, available on Eastbay, with a custom option on UA’s new Icon custom tool, which even allows you to add photos/logos to your creation. Edwin “Sugar” Diaz had a sweet new Easton custom glove that popped with Mets blue and orange.  Am I alone in my love for Mets colors?  They just make my heart sing. The blue/orange is not an option, but Baseball Express offers a quality equivalent “Pro Collection” at this link. Amed Rosario seems to have made a switch from his gorgeous Mizuno glove from last year to Wilson, working in a stock Wilson A2000 1786 that you can get at this link.  Something tells us that this may just be a placeholder until the Wilson glove team visits Mets camp, but that’s just speculation. Its a fantastic looking piece of leather and one of the most popular patterns in the middle infield. Oakley M2 sunglasses carry on the volt/Mets tradition and the single color Franklin CFX Pro full color chromes are bangin’.  You can get pretty close but not exact at this link.

Rosario seems to have found a friend in Cooperstown Bats, swinging an AR1 Maple.  No AR1 for sale on Cooperstown’s site, but you can shop the closest alternative, the 243H here. Wilson Ramos was getting his work in along with a stable of Mets catchers which includes Devon Mesoraco, Travis d’Arnaud, and Tomas Nido.  It’ll be interesting to see where the at-bats go after Ramos, who will surely be the Opening Day starter. Another interesting thing to watch… Ramos’ custom game.  He was still rocking his Tampa Bay Wilson A2000 1790 mitt from last year in the bullpen at Port St. Lucie, but you can expect to see one of the most flamboyant catcher’s gloves on Earth when Ramos’ Mets custom is game ready.  (Oh, and the Nike catcher’s gear that everyone asks about: IDK, try eBay) Mets booming first base prospect Peter Alonso put up a ridiculous 42/146 year across three minor leagues last year.  He’s fighting for the starting 1B job in Queens this year, training with a Valle Eagle 11 1B trainer early in Spring.  Alonso’s goatee says to all other 1B candidates, “LETS PARTY.” The thing about simple color-blocking is that it looks good from the upper deck, and it looks even better up close.  Cecchini ought to make the team on swag alone.  Eastbay has this style, and NIKEiD can make these exact cleats.

I was already sweating his gear when Cecchini put on the Franklin Pro Classics, which pretty much sealed the deal.  He won. Who else do you want to see at Spring Training? 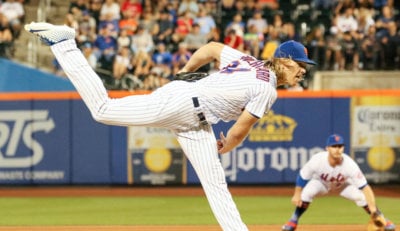 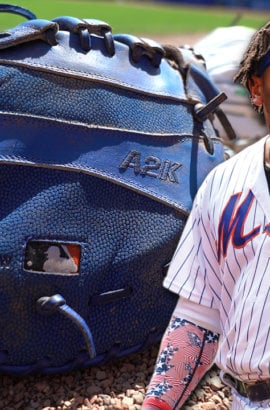