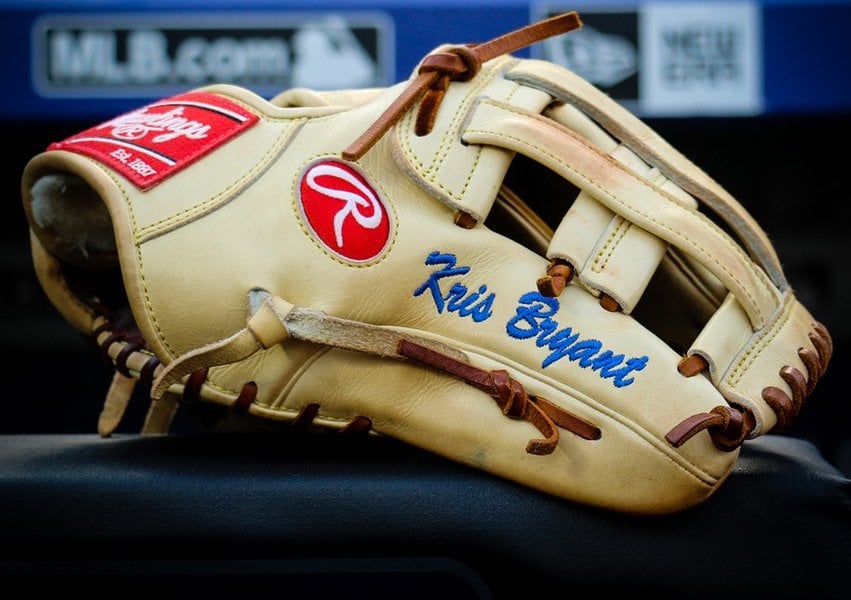 While having a glove for every position is a dream (and we’ve got posts featuring the best gloves for each position – scroll to bottom of this post), that kind of specialization is unlikely and unnecessary for a lot of ballplayers. In this post, we’ll take a look at a handful of gloves that can work for various positions on the diamond. When looking at gloves that work for multiple positions, trade-offs have to be made. While they may not be perfect, these gloves will allow you more flexibility, whether you’re an infielder who plays around the diamond, an infielder/outfielder, or a position player who can come in to pitch.

The Rawlings PROSKB17 is a rebranded PRO200 pattern. This particular model was made popular by Cubs’ third baseman Kris Bryant. Coming in at 12.25″, it is a big option for third base and a small option for the outfield, but will be serviceable for both.

If you do play outfield and third base, this is one of the best options for you. If you want to change how the glove plays, shifting your grip is a viable option. Wearing the glove straight up will make the pocket a little bit shallower which is perfect for third base. Putting two, or even three, fingers in the pinky stall will deepen the pocket and push the glove farther up your hand, which will extend your reach.

The KB17 pattern is most commonly available with an H-web, which also lends itself to versatility. The Rawlings website offers a similar colorway to the one that Bryant gamed in 2019 (pictured above). This all blonde Pro Preferred model is available for $360 from Rawlings.com.

Playing all three positions on the infield is common for young players, but each position requires slightly different features in a glove. The Wilson 1787 pattern, with its middle-of-the-road size and shape, is a great option at any one of the three positions. Coming in at 11.75″, it would be a larger option for second base, but would be a perfect fit for the left side.

Gold Glover at shortstop, JP Crawford, earned his hardware with his blonde and black 1787 that has a pop of Mariners’ green for $380 at Wilson.com. As mentioned earlier, shifting your grip is an easy and effective way to change pocket depth to accommodate various positions.

Wilson and All-World defender Matt Chapman created an eye catching game model based off the 1787 pattern. Chapman’s game model is available for $380 from Wilson.com.

*It is worth noting that both Chapman and Crawford wear their gloves two in the pinky but wearing it straight up will make the pocket shallower.

Growing up, and even into high school, playing the infield and pitching is common for the best athletes. You’re often playing somewhere up the middle, whether that be on the mound, behind the dish, the middle infield, or center field. Having a glove that can work for three out of those five positions will make you a more versatile player and give the coach more confidence moving you around.

Javier Baez has proved himself to be one of the most electrifying players in the show. His defensive abilities have earned him the nickname “El Mago” (The Magician). Baez broke out a unique one-piece glove with an elephant print in 2020 that serves as the model for this versatile option.

It’s the one-piece web that Baez has opted for that makes this a great utility option. Pitchers value the ability to hide their pitches behind a closed web. When playing infield, a closed web is much less common, but why? Jeter wore a basket web. Ozzie Smith even wore a trap! With these closed webs, you’re less likely to get your throwing fingers caught in the open holes that exist on an H-Web or I-Web. There are a growing number of infielders in the MLB wearing a closed web like Javy, Amed Rosario, and Freddy Galvis, among others.

While Baez’ grey/elephant print leather isn’t available, SSK’s White Line is, and its a lightweight, easy to break-in option. Baseball Express is offering this 11.25″ for $225 on their website.

The last position combo we will highlight is a common one for the southpaws – pitcher and outfield. The priority for guys on the bump is two-fold: hiding the ball and being able to manipulate your grip inconspicuously. When roaming the outfield aka the “green ocean,” ball security is first and foremost on a list of needs.

The Wilson PF92 is a great option to bridge the gap between these two sets of needs, especially for younger ballplayers. This Wilson A2000 PF92SS is a Pedroia Fit model, meaning it has narrower finger stalls with a smaller hand opening. If you’re a big guy, this may not be a good option for you. For the younger crowd, or just guys with smaller hands, this could be a better fit for you.

This 2021 A2000 PF92 model has a slew of eye-catching features. The grey and red color combo alone makes this one stand out, and the bold logos add to an updated Wilson look. A “Pro Laced T-Web with Baseball Stitch” combined with Wilson’s weight-saving SuperSnakeSkin make for a very unique glove. You can pick this one up for $280 from Wilson.com.

Obviously, no glove is going to work perfectly for every position on the diamond. Positions like catcher and first base have no substitution. This list just gives a few options that can provide some flexibility for a handful of position combos.

If you are interested in a specific position only, see our posts featuring each one: