Since we last discussed Louisville Slugger’s 915 Prime performance at the junior home run derby, with its draw jawping power, as well as its sighting in the hands of the Wizard, the bat line continues to make headlines as it releases to the public in just a few short days.

Now that we’ve had a chance to swing the bat we can testify of its ability to humiliate baseballs. The 915 has a nice, deep balance point and seam-splitting end loaded cut that could stunt double as a boat oar. It is no wonder Slugger, during the NCAA World Series Tournament, was something like 25% more likely to hit a home run than any other bat.

(A more in depth review of the Louisville Slugger 915 can be read here.)

What might be missed in the hoopla of an improved 2014 Attack into the 915 Prime, is the fact the 2014 Slugger Raid is the new and improved 715 Select. The 715 Select, like the 915 Prime, also comes with improved stiffness through the connective piece. By my calculations the 915 and 715 have very similar swing weights.

The 715 is still loaded with a high end composite handle, the sting-dampening of the transition point made out of graphite, and the durability that Slugger offers. The aluminum barrel is a high grade alloy which Slugger lovers have come to know and appreciate. Those who like a hybrid bat are looking in the right place.

(A more in depth review of the Louisville Slugger 715 can be found here.)

Slugger has resurrected the name Omaha for the all-aluminum bat in their marquee line up for 2015. The 515 Omaha is also set to release this week and it is exactly what you’d hope for in an aluminum one piece bat: nice stiff feel with a solid hit felt through your hands. Compared to the 915 and 715 lines, the 515 Omaha comes in with a swing weight near 10% lighter. It should be considered a balanced bat with a balanced swing.

Those who like the stiff and responsive feel of a one piece stick with a balanced swing weight are in the right spot looking at the 2015 515 Omaha. 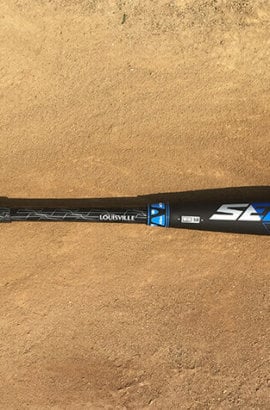