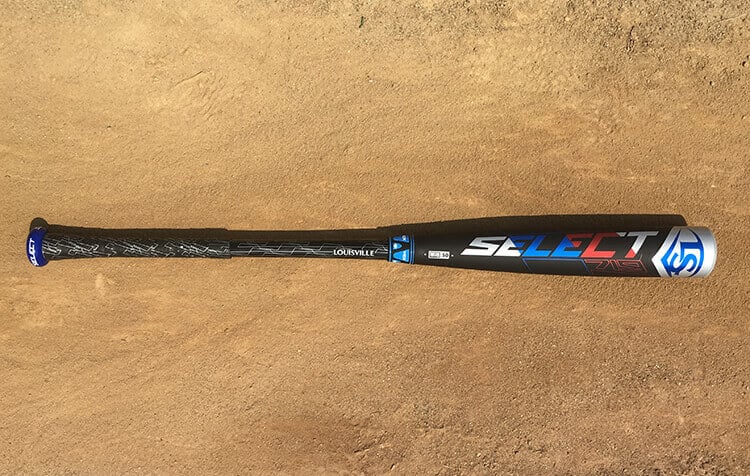 The Louisville Slugger Select 719 is a two-piece hybrid bat with a slight endload. The Select series was reintroduced last year with the 718 and was very successful in both the high school and college ranks.

The Select 719 continues the clean family look of this year’s Slugger line. The barrel is matte black with silver, blue and red graphics.

The handle is a gloss black and is partially covered with the black and blue VCX connection piece. The handle has an interesting geometric design that is also found on the grip.

The knob is blue and has ‘Select’ written on it. The SBC endcap is gray and black. Louisville Slugger reintroduced their own grips to the 2019 line. Since 2016, Slugger bats were fitted with Lizard Skin grips. The new Louisville Slugger grip feels similar to a Lizard Skin. The grip is on the thinner side and has a tackiness that is almost identical to a Lizard Skin. The only problem that I see with the grip is that it’s a bit short. If you choke up a lot your top hand is a little too close to coming off the grip. The handle has a medium circumference and comes with a slight taper into a conventional knob.

Personally, I found the knob a bit uncomfortable against my bottom hand while swinging, but I like to swing bats with a flared knob. It’s pretty easy to tape up yourself if it feels uncomfortable, so I wouldn’t let this be a deal breaker if you are considering buying it.

The 719 is a slightly endloaded bat. This year, Louisville Slugger released a chart of Swing Weight scores for every one of their bats. This is very valuable information and will help you choose which bat is right for you. Lower numbers mean the bat is more balanced while higher mean it’s more endloaded. Here’s the chart: I tested every 33″ Louisville Slugger. While the 719 is definitely a little heftier than the others, it’s not overwhelmingly heavy. I have seen various types of hitters be successful with the endloaded Select series. While many endloaded bats are meant for big, strong dudes who can put the ball in the seats, the Select 719 offers a slightly more manageable weight. DeMarini released the same type of chart that Louisville Slugger did with the same scale. If you compare the 33″ Select 719 and the 33″ DeMarini Voodoo Balanced, the Voodoo has a higher swing weight. If you’re seriously considering swinging an endloaded bat next year, I encourage you to test out the 719.

The 719 was a fun swing. The alloy barrel doesn’t need any breaking in and will perform right away. Louisville’s new VCX connection piece felt great and did its job of killing harsh vibration, however, it really didn’t feel any different from the TRU3 connection used on the 718. This doesn’t mean it doesn’t work, it just means the bat swings very similar to last year. The connection piece allows the barrel and handle to move separately from each other, which in turn creates a ton of flex. The VCX connection piece also kills a lot of vibration, which gives the bat a softer feel on contact. Contact produces a loud ping, but not nearly as piercing as Slugger’s one-pieces. The key to hitting with the 719 is to get extension. It has a relatively short barrel and an endloaded weight distribution. This means that most of the mass is concentrated in a smaller area. If you get extension and catch the ball with the concentrated sweet spot, the ball’s really going to fly. Successful swingers of the 719 will most likely be more experienced hitters who are very good at finding the barrel. They can deal with the smaller sweet spot and will benefit from the concentrated mass in the barrel.

Not everyone will like the 719. It’s designed for a stronger, more experienced hitter who has already mastered finding the barrel. That’s why its so popular in college. So if you’re a guy who is on the stronger side and can already barrel up balls consistently, I recommend giving the Select 719 a shot.