When it comes to flashing leather, some of the flashiest in the MLB can be found at the second base position. Players like Brandon Phillips try to outdo themselves every year with a fresh custom glove look.  In 2017, the 2B glove pool is only getting swaggier with younger players like Rougned Odor and Jose Altuve establishing themselves as glove “artists,” designing vibrant custom gloves that compliment their equally unique range of skills.

Behold, our seven favorite gloves at second base – the best and best-looking gloves MLB second basemen wear in baseball today. Phillips has swag in spades, and a glove with his own logo just adds to the mix. …and the snakeskin sets this glove apart.  In a recent interview with Phillips, he told WPW that he “likes to do things that people THINK about.”  The red, saddle tan, and black colorway is flashy in photos, and it looks even better in person. His 2016 model is available here.  His discounted 2015 model, arguably even sexier, is available here.

I can not wait to see what Phillips has for us in spring training. He always keeps us on our toes.  He visited the Wilson headquarters to design his 2017 gamer recently, so we know its coming soon. For some wild reason, I feel like his 2017 glove is that navy, white, and red A2000 that is front and center on the table. Don’t take my word, but it seemed like he was wearing it a lot when he was featured on Wilson‘s Instagram story. The Mariner green color on the web and binding is just filthy, and looks great with some use. I also love that Super Skin back. Cano’s 2016 gamer is available here.

However, Cano might have a replacement for next season. He was seen wearing a similar RC22 during warm-ups:

There is more mariner green on this model than his 2016 gamer.  Eastbay offers this one, and it’ll probably be Robby’s gamer.  Shop it here, and even has youth models. Zobrist’s model is not all that flashy, but that Bruciatto color makes my heart melt. The color is just so rich (and the name sounds rich, too) and beautiful. Get it here. Altuve’s glove is just plain sick with the black leather and orange accents. The unique laced web does not hurt the looks, either. It kind of looks like the color has faded on Odor’s gamer, but the reason it ranks so high is because it looks so good new: The above picture is when Odor’s Glove was released as a Glove of the Month, and you can see why I like it so much. The red and blue pop. Kinsler won a Gold Glove with this beauty, a Japanese Nike that is available (while it lasts), just not with Kinsler’s personal touch. Nike makes some of the nicest looking gloves on the market, and the Gold Glove tells you that their gloves get the job done, too. There is something about Castro’s glove that makes me say that his glove is the nicest at 2B. Maybe its because its aged so perfectly.  That deep brown leather contrasting with the light blue.

Only two of the selected seven 2B gloves are from companies other than Wilson, and we know from WPW’s glove research that Wilson has a very strong faction at 2B.

All but two gloves (Kinsler’s and Zobrist’s) are 11.5″. 11.5″ is the most popular size at 2B by far, and you can check out my research on that here. Chances are, this is not going to change.

Regarding web choice, once again, there are only two outliers.  All but two of the selected gloves have an I-Web. Our web usage report verifies that the I-Web is the most popular web among second basemen. Again, do not expect this to change.

What is your favorite MLB 2B Glove? 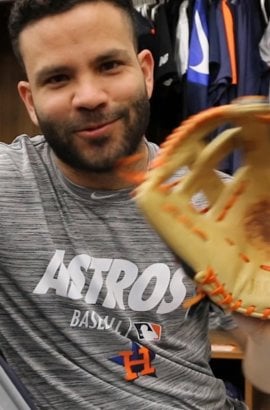