The American League Champion Kansas City Royals were short a few guys (Hosmer, Gordon, Guthrie, Cain) but did not lack for “estilo.”

In Kansas City, the Rawlings cup runneth over.

Alcides Escobar’s Rawlings PROPL217JB was most esteemed and Jarrod Dyson’s Mesh might be the one I’d most like to play with, but that Bubba Starling PRO303HC2T in Mocha won the beauty pageant for me. Ryan Roberts won the award for “Glove Most Likely to Smell Bad.”  Thing was mangy. Some notables in this gallery:

Dove Tail Bats getting a look from a few teams that I saw while in AZ.  Has a nice menu of pro models on its site at $75-$105 (I looked briefly).

Omar Infante swings an R205 profile Slugger which we traced as far back as Reds greats Barry Larkin and Eric Davis.

On a related note, I wish bat companies would stop letting guys name their own models and stick to the original numbers set forth by the Godfather of Lumber (who was just acquired by Wilson Sporting Goods), Louisville Slugger.  That way WPW can better trace the lineage of bats and in 50 years we can say the AL MVP of 2065 “swings the same bat as the great Mike Trout.”

Speaking of changing the names of bat profiles, we saw our first Louisville Slugger DJ2, the new namesake of the historic P72 profile.  Royals hopeful Ryan Jackson was swinging it.

A couple of odds and ends, Hilltopper Clay by Stabilizing Solutions is the choice of Rockies and DBacks grounds crew at Salt River Fields at Talking Stick.

BatTar Up by Markwort Grip Enhancer

A few sets of custom kicks:

Which would you rock? 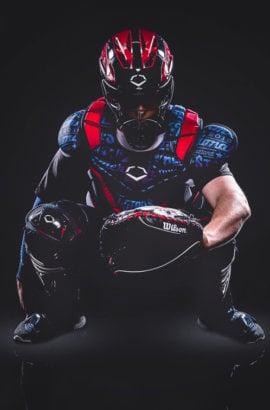