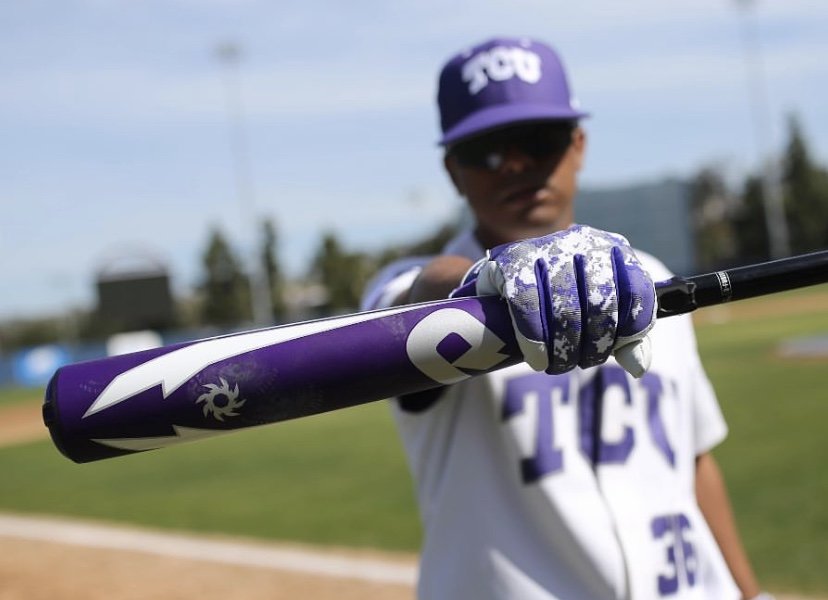 Thank the Baseball Gods …  the College World Series is here! As is our duty, we are breaking down the gear that will take center stage at the pinnacle of the college baseball, specifically the bats. Lets take a look at the bat brands that each school in the field of 64 has swung throughout the year. In addition, Omaha has historically been a prime opportunity for bat companies to get their new, upgraded models some TV time. While many players won’t mess with their mojo on the biggest stage of college baseball, it’s always fun to see someone swinging the new, unreleased bats for the first time.

The Bats Swung by the 2019 College World Series Finalists 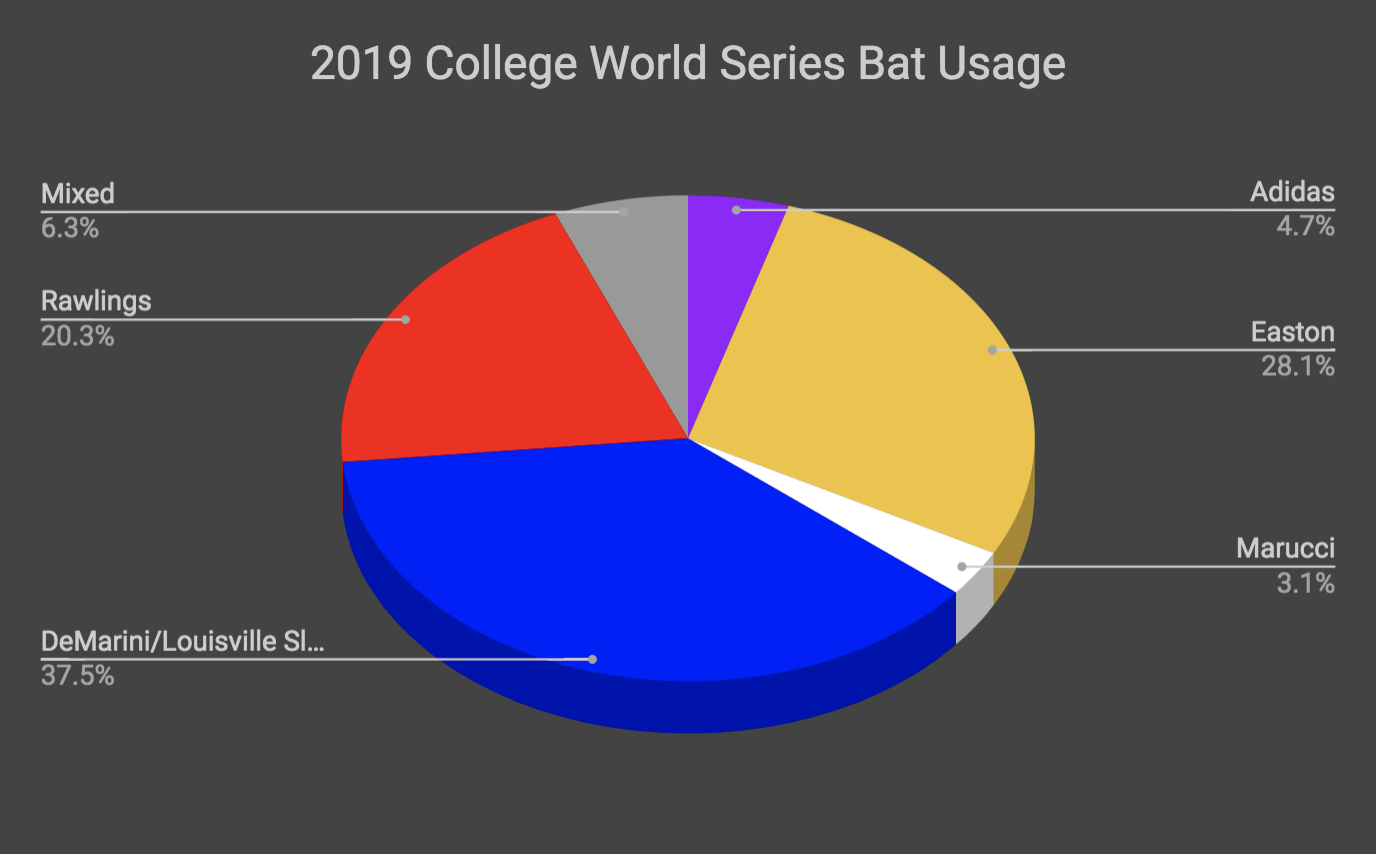 Here’s a chart of brands and the schools in the tournament that swing them. Schools highlighted in gold are in Omaha. 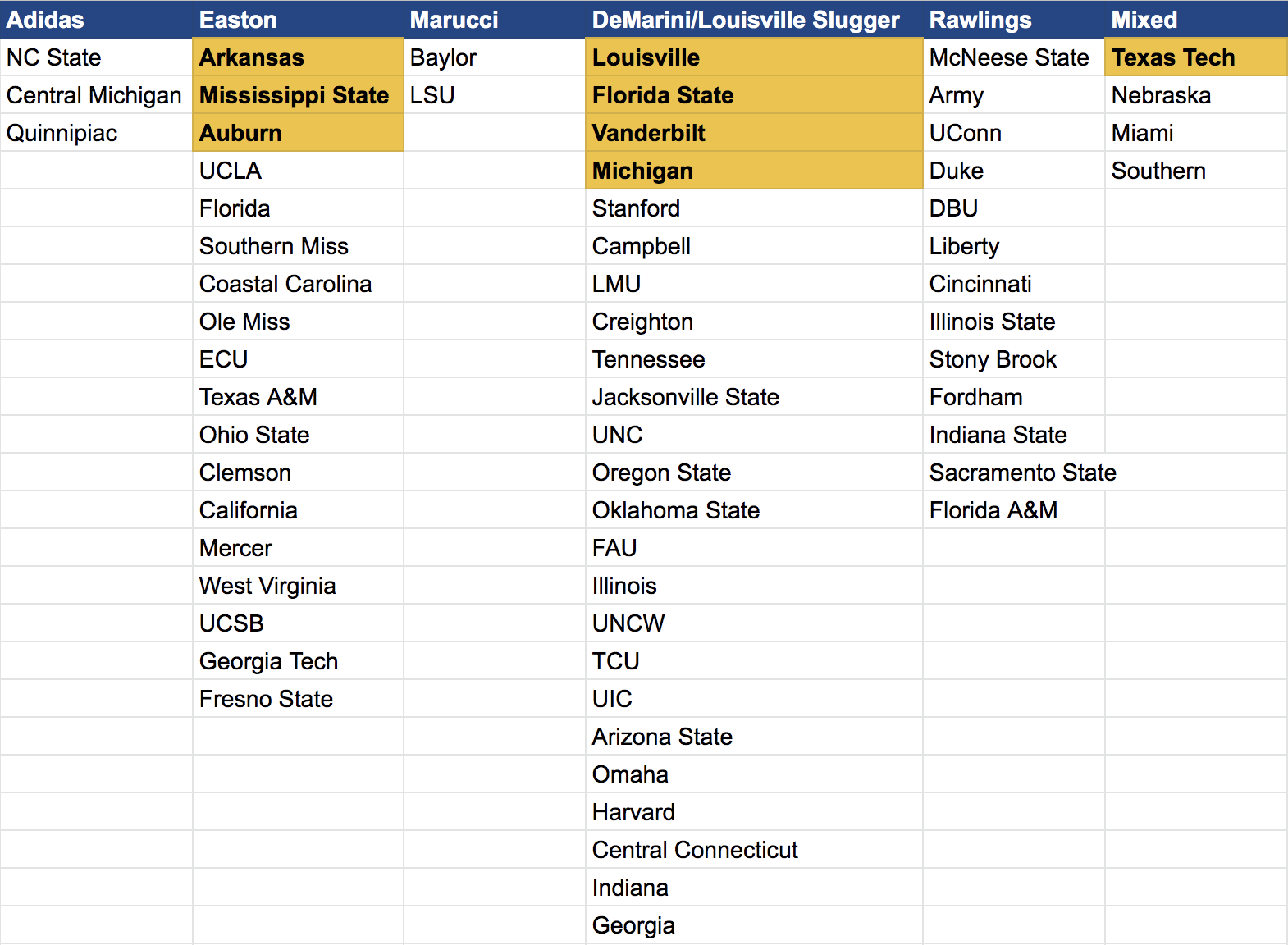 DeMarini/Louisville Slugger had the most teams in the tournament this year with 23. They were followed by Easton with 18 and Rawlings with 15. Four schools used mixed brands, while Marucci and Adidas were tied with 2 each.

Because the two brands are owned by the same company, schools who swing their bats can normally choose between the two brands. This is advantageous because it essentially doubles the selection of bats for a player to choose from. 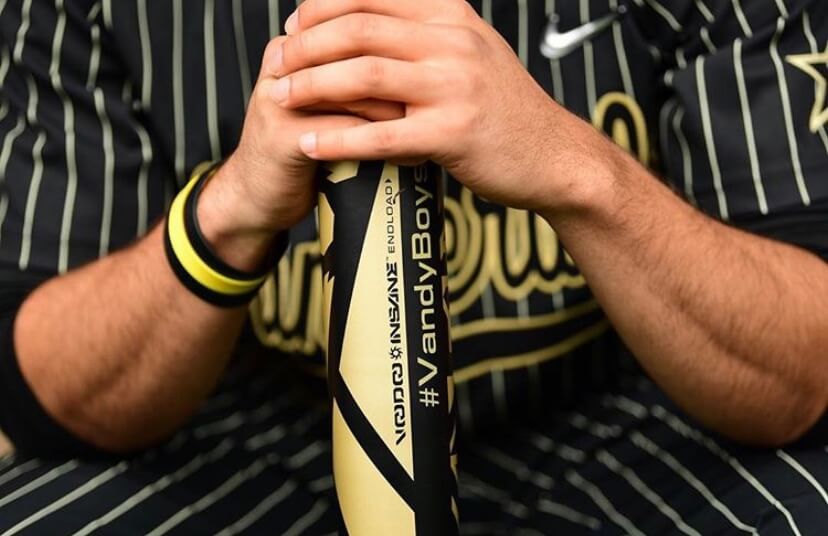 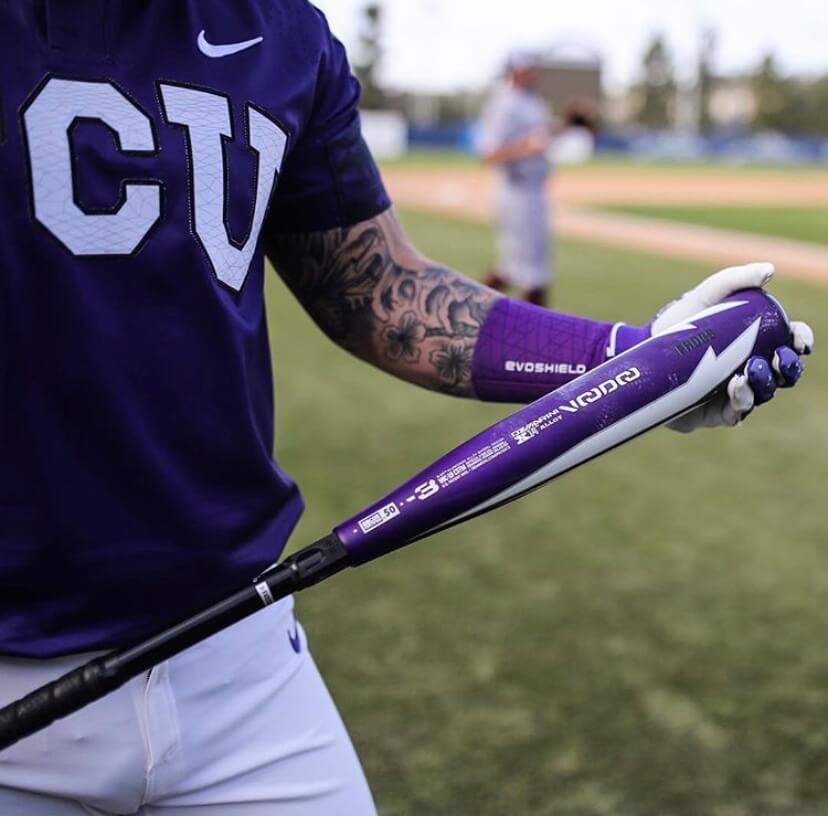 Demarini | The two-piece hybrid Voodoo line is one of the most popular bats in college baseball. Many college players prefer the Insane model (scored 70 out of 80 in WPW’s review) for its large hitting surface and end-loaded weight distribution. The guys in Omaha are strong dudes, and with the Voodoo Insane they can put a ton of mass behind the ball, giving them some extra pop. DeMarini also offers a light swinging one-piece bat called the Voodoo One (scored 55 out of 80 in WPW’s review) for the guys that are looking for a bat that provides a little stiffer feel. 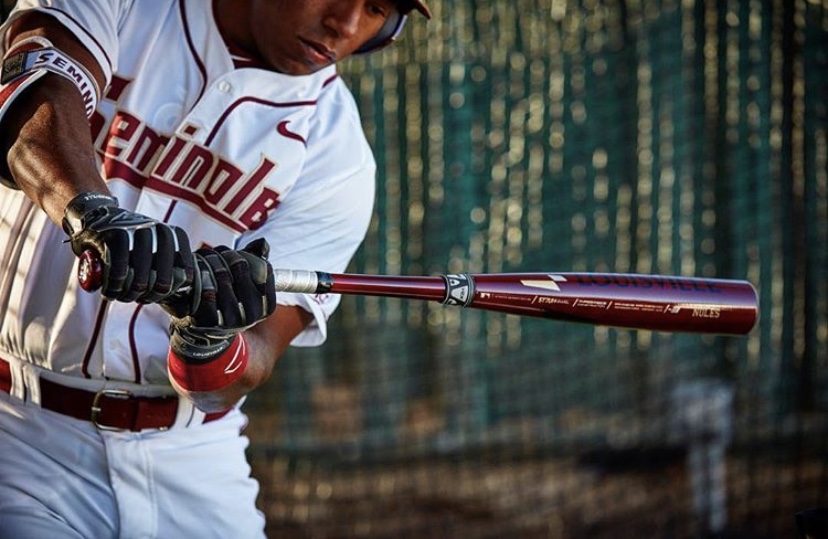 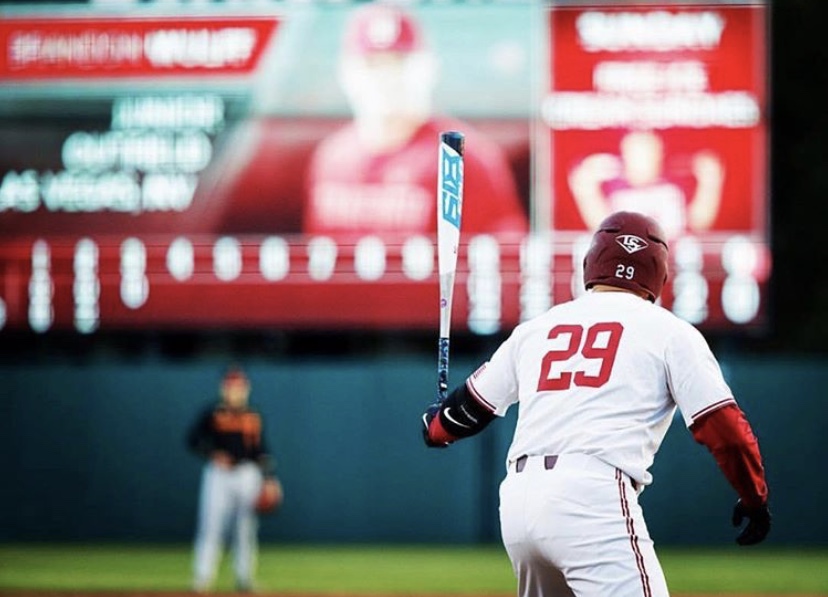 Louisville Slugger | Guys seem to swing every one of Slugger’s bats, which speaks to how successful their lineup was this year. Arguable the most popular model is the Select 719 (scored 65 out of 80 in WPW’s review), which is an endloaded multi-piece hybrid. Similarly to the Voodoo Insane, it allows guys to put more mass behind the ball because of its heavier barrel while providing a stiffer feel than a composite bat. We also expect to see the Meta Prime (scored 70 out of 80 in WPW’s review), which is a composite bat that offers one of the biggest barrels with a very low swing weight for guys that want to whip their bat through the zone. For the one-piece swingers, the Solo 619 (scored 60 out of 80 in WPW’s review) tends to popular with a low swing weight and stiffer feel. 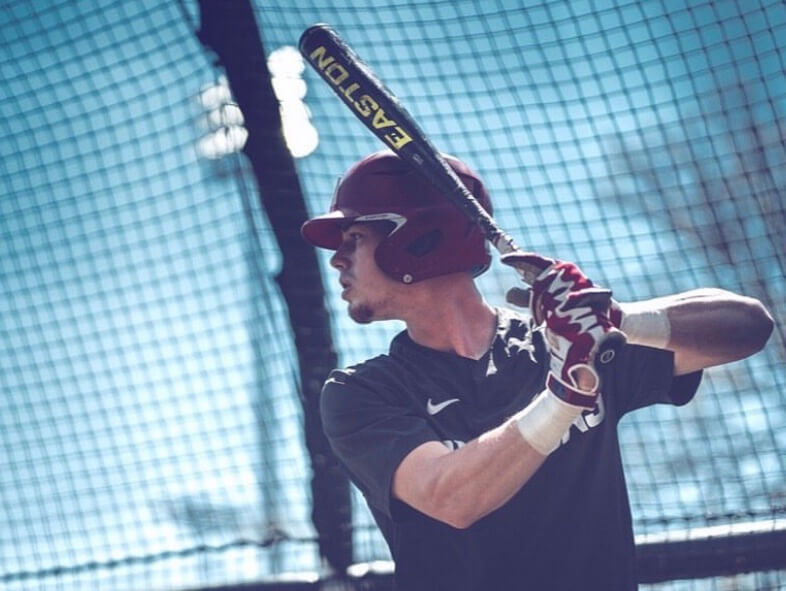 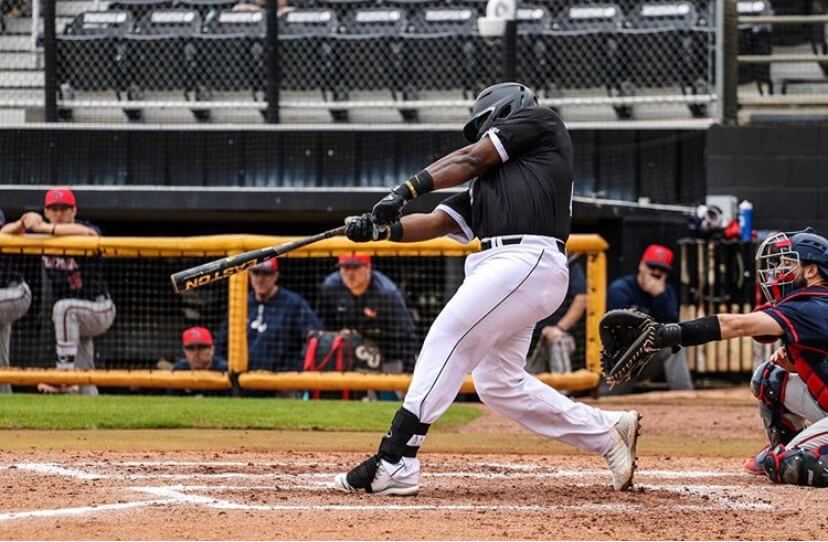 For Easton, the most popular model seems to be the Fuze, which is a lightweight one-piece. They also offer a more endloaded one-piece called the Alpha that can be seen here and there. Guys have also been swinging the 13.6 Hybrid, which is an endloaded multi-piece hybrid designed for stronger hitters.

Shop the Fuze here.  Shop the Alpha here and the 13.6 Hybrid here. 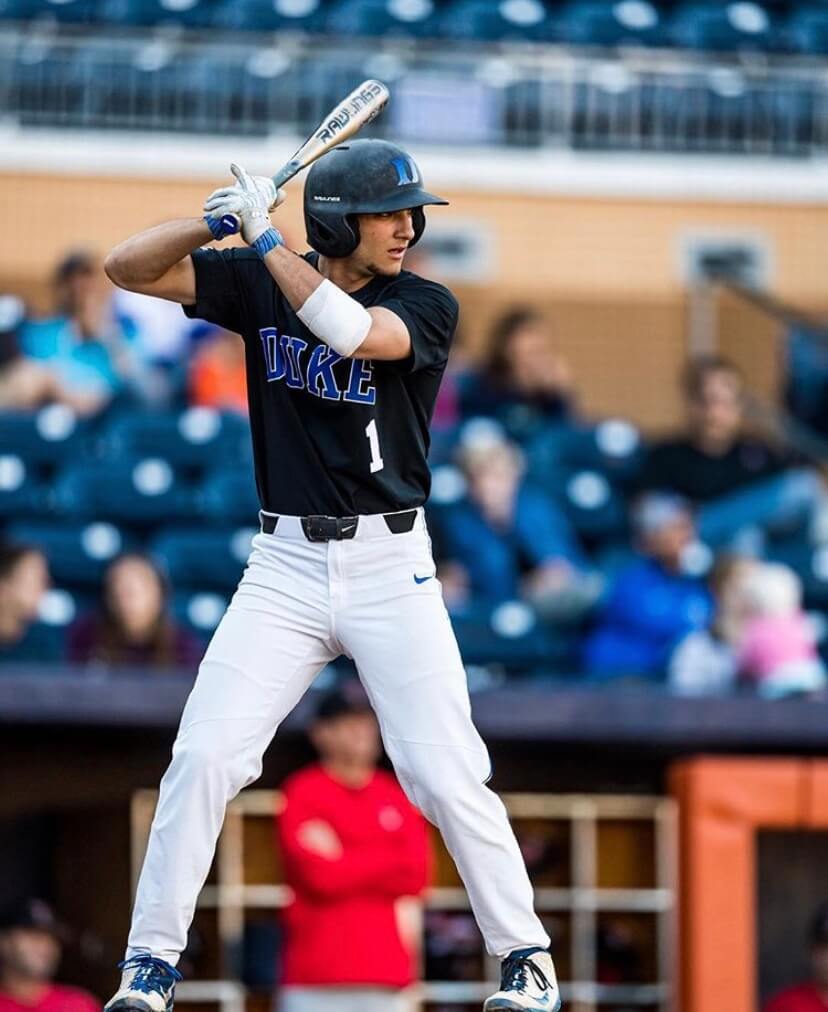 Shop the Velo here and the Quatro here. 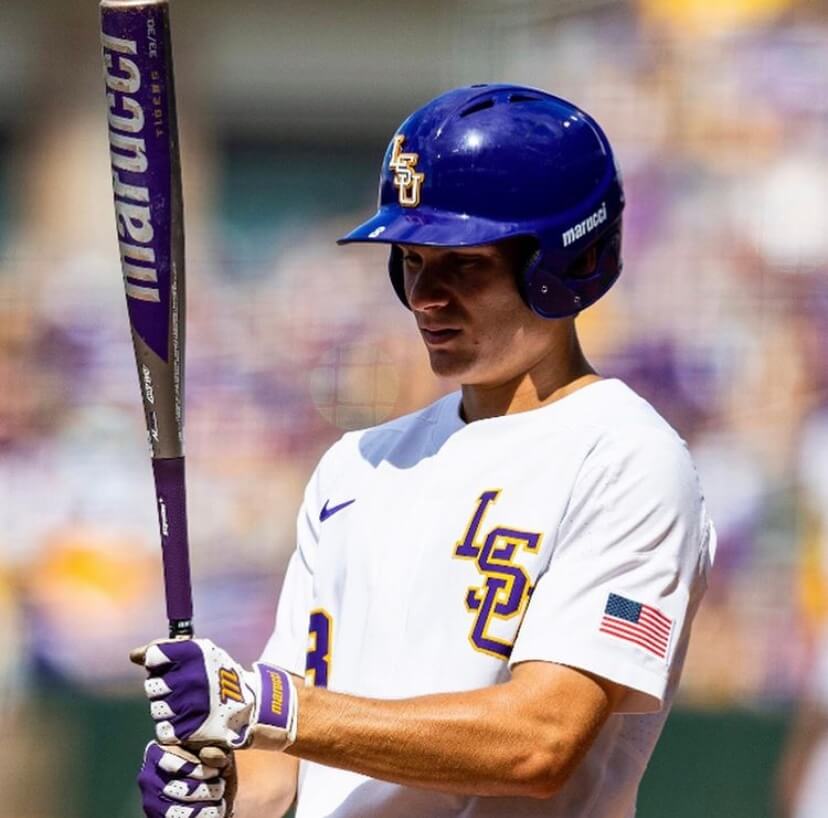 The CAT 8 (scored 65 out of 80) is swung extensively by schools with Marucci deals, and it is a fine-tuned one-piece with a rather large barrel. Some guys continue to swing the Posey28 (, which is the CAT 7 with the paint job of a wood bat. This offers one of the most unique looks on the field.

Shop the CAT 8 here and the Posey28 here. 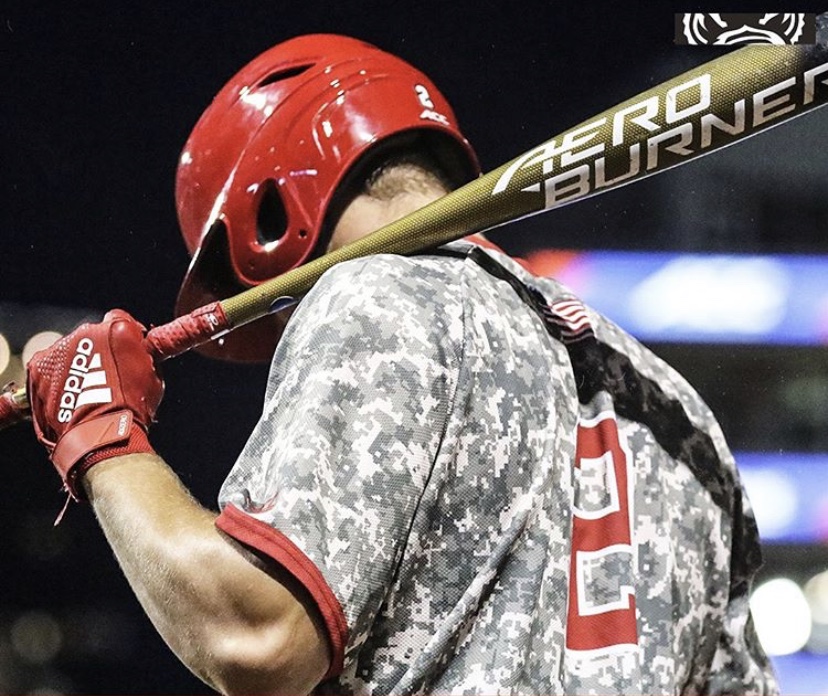 Word on the street is that Adidas is getting out of the bat business, so this very well could be the last year of seeing Adidas bats on-field. Most of the players swinging Adidas chose the one-piece Aeroburner. 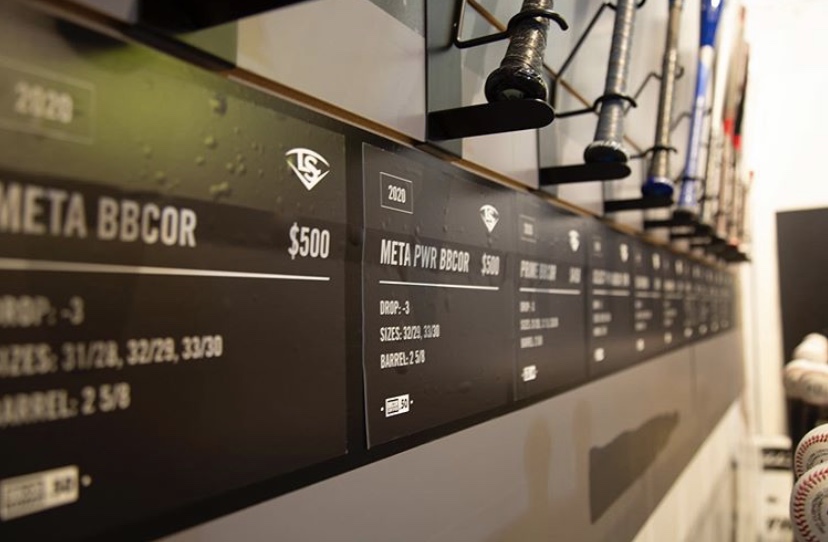 The top brand in the College World Series this year is Louisville Slugger/DeMarini. I expect the most popular model to be the Slugger Select 719. You will also almost definitely see some older models that players have continued to swing for multiple years. If you’re trying to save some money, look out for the Slugger Solo 618, the Rawlings Velo,  or the Marucci Posey28. As to which bat is going to have the biggest hit in Omaha? I’m going with the Select 719 in the hands of a Louisville Cardinal. Make sure to keep an eye out for the new 2020 BBCOR lines in the hands of some hitters in Omaha, especially the new, endloaded Meta that Slugger seems to be hinting at on their Instagram (Meta PWR BBCOR).