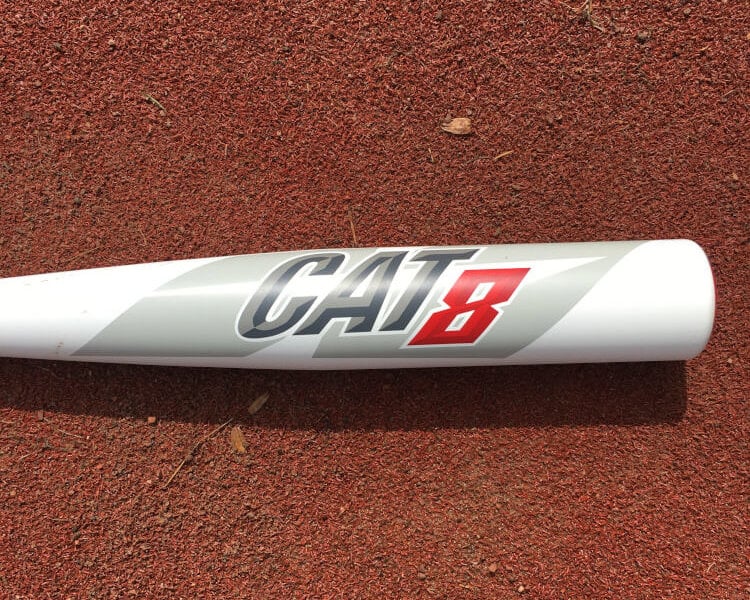 Marucci’s CAT 8 returns this year looking to build off of the widespread success of the previous CAT models. It is structurally identical to the CAT 7 but is made of Marucci’s new AZ105 alloy, which allowed them to build a more responsive barrel with more room for error for the hitter.

Marucci stuck to its signature colors of a gloss white base with red/gray barrel graphics. For this year’s lineup, they actually changed around the graphics a bit, basically splitting the barrel in two. The white shows every speck of dirt on the bat. A lot of players will like this as it gives the bat a progressively grittier look. I’m a fan of Marucci’s endcap. The grip and knob are both light gray. Marucci’s AV2 knob is one of the most effective vibration dampeners in the game and was first seen on the CAT 5. It’s a rather large knob that looks a bit awkward, but it really gets the job done in terms of vibration killing and comfort.

The stock grip on the CAT 8 is the same as last year. If you’ve ever swung a Marucci metal in the past you’ll know what it feels like. The grip is thick and is one of the softest on the market. This thickness also helps to limit vibrations in your hands. It’s covered in tiny holes that provide traction so your hands don’t slip. The handle itself is pretty thick, too, and tapers comfortably into the knob.

The CAT 8 is identical to the CAT 7 in terms of swing weight. It’s a heavier balanced bat that’s comfortable and controllable but definitely not ultra-light. I think that a lot of hitters will like the swing weight because you can actually feel the bat throughout the swing, much like a wood bat. The CAT 8 has a little more weight on it because of its large alloy barrel. We measured it to be the largest barrel available for a one-piece bat. It’s remarkable that Marucci is able to keep the bat as light as it is considering the barrel size. I found the swing weight to be comparable to DeMarini’s Voodoo Balanced, which has a light composite handle. This should show you how skilled Marucci is at working with alloy.

For the CAT 8, Marucci upgraded the alloy to make it stronger, this allows them to thin the barrel walls in the places that needs it, thus expanding the sweet spot. It’s tough to get an accurate measurement on how much better the sweet spot actually is. While I do believe that the CAT 8 has an upgraded sweet spot, I hit with the CAT 8 and CAT 7 side by side and could not tell the difference between the two. In reality, it’s a small enough difference to where you won’t really notice it while hitting. Having said this, the CAT 8 is still a phenomenal bat. Its large barrel helps to consistently put mass behind every pitch you swing at. On contact, you’ll get a very loud ping. Between the AV2 knob and thicker grip, it’s almost impossible to get any overwhelming shock in your hands. I think that the CAT 8 will appeal to a lot of hitters.

The CAT 8 is going to be an immensely popular one-piece bat. The balanced swing weight and low hand vibration will feel good in the hands of a variety of different hitters. While the upgraded sweet spot doesn’t feel much different, if it allows for a touch more exit velocity around the sweet spot, then it’s doing its job. Overall, Marucci continues to impress with its one-piece craftsmanship.