In continuing our MLB report for 2017, lets take a look at catcher’s gear usage by the 30 best catchers on the planet right now, that is, the starters in the MLB.

Although Nike has been quiet in the glove game, the Swoosh makes its presence felt behind the dish.  As you can see in the above infographic, catchers wore Nike gear (chest protector, leg guards) more than any other brand. Despite the heavy usage in the Bigs, Nike catcher’s gear is scarcely available to non-pros.  Brands compete for/compensate catchers to wear their gear because the position gets so much TV time.  That makes MLB catcher’s gear more of a branding opportunity than it is a showcase for the latest catching tech. Gary Sanchez wore exclusively All-Star gear on his way up to the MLB, but now that he’s one of MLB’s best, he’s draped in Nike gear with a Rawlings glove.  He still wears an All-Star mask, but the front logo is gone.  All-Star, a family-run company out of Massachusetts, makes damn fine catchers equipment and still has consistent MLB usage despite not being a global superbrand like some of its competitors. (Martin Maldonado in some fresh gear for Players Weekend 2017)

You’ll notice that most of these are younger/lesser-known players, which is probably why they’re still wearing All-Star—they simply haven’t gotten a contract offer from one of the bigger companies, and All-Star really is the catcher’s brand. Another example of this is Salvador Perez switching from All-Star to Rawlings after he emerged as one of the game’s best catchers.

If you needed more reason to consider All-Star catcher’s gear, Under Armour’s prevalence in the catcher’s gear category is secretly an endorsement for All-Star as well, since All-Star manufactures all the UA branded gear you see on MLB catchers.  All-Star simply slaps a UA logo on it and fans are none-the-wiser.

Here are the starting catchers who wore UA in 2017:

You are not just a fan, though.  You are a student of the game, and you should know that if we credited All-Star with UA’s share, then 40% of MLB catchers are wearing All-Star gear in 2017. (Franky Cervelli at Spring Training 2016 in the Rawlings “Yadi” gear)

As for the remaining brands, Rawlings has select representation amongst catchers, with the following wearing Rawlings equipment: And last, a new brand, co-founded by Braves starting catcher Tyler Flowers, Force3 Pro Gear.  The flagship product for Force3 is their mask technology, which has a suspension system that has shown the ability to reduce the severity of impacts on foul tips.  We’ll get more into that in the next section, but Force3’s got a growing list of believers, and along with Flowers, Yasmani Grandal recently adopted the chest protector and leg guards, too.

Ultimately, which catcher’s gear should you buy?

You should give All-Star a long look if you’re in the market for a new set of catcher’s gear.  The others listed with great options are Rawlings and Mizuno.

As far as head protection, some guys like Grandal, Austin Hedges, and Brian McCann are choosing Force3 despite their contracts, so you’ve got to consider Force3’s “Defender” Mask to protect the ol’ coconut. The catching position has historically been one of the most evenly distributed among the premium brands.  In 2017, 46% of starting catchers wore Rawlings, a one glove improvement from 2016.  Wilson dropped a bit from 23% (7 starters) to 17% (5 starters), and Mizuno picked up two starters, reaching 20% of starting catchers.  Tony Wolters and Mike Zunino made the difference from 2016 for Mizuno.

The biggest names are wearing Rawlings, and here are the WPW profiled catchers that wear a Rawlings mitt: All but Russell Martin use Heart of the Hide leather.  Russell the Muscle uses Pro Preferred.

Here he is talking about why he loves Rawlings: Which catcher’s mitt should you buy?

Well, according to the league, Rawlings Heart of the Hide is the choice.  Posey and Yadi have worn one their entire careers.  On the contrary, Salvador Perez and Gary Sanchez were originally All-Star guys, and Russell Martin was originally a Wilson guy, so the debate probably comes down to preference. 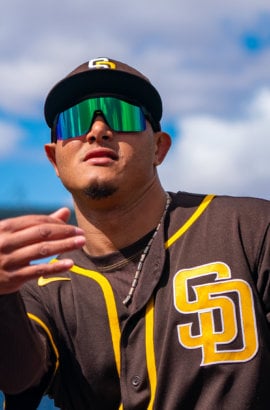