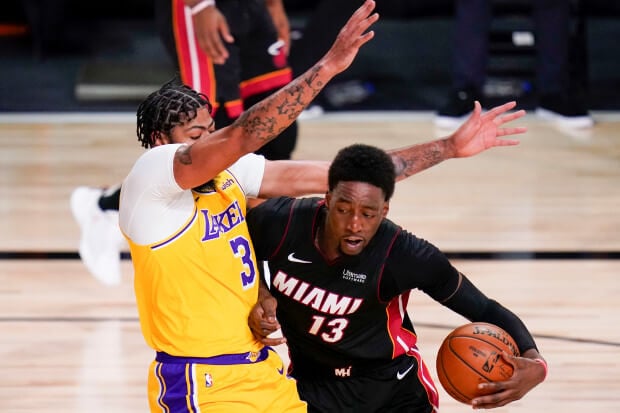 Welcome to Nightly Pro Notables: a collection of the hottest sneakers and biggest moments of the night on October 6, 2020.

LBJ Plays “One of the Biggest Games of His Career”

While, Anthony Davis brought his A-game on the defensive end, LeBron James brought all the offensive highlights on his way to a near triple double.

You knew the King was hyped based on this attack and assault of the rim:

He wasn’t just driving to the rim though, as even his one-legged fadeaways were money:

The skillset from one of the greatest ever was also on display on this and-one play that started by splitting a defense.

After the huge win, LeBron said that was one of the “biggest games” of his career. All 17 years.

James finally rocked the Nike LeBron 18 for a full game outside of warm-ups after rocking with the 17 the entire bubble. This orange colorway doesn’t have a release date yet, but you can find other colors in the future at StockX.

One of the greats in the WNBA in Breanna Stewart had her career in doubt after suffering an Achilles tear in 2019. The Seattle Storm star was on top of the world, winning the 2018 regular season and WNBA Finals MVP before that season-ending injury.

Stewy came back with a vengeance though, dominating teams alongside Sue Bird and Jewell Loyd (more on them later). This includes a game 3 sweep of the Las Vegas Aces tonight 92-59.

There was never a doubt on who would take WNBA Finals MVP once more, and the celebration was on during post-game.

Breanna rocked a black Nike Air Zoom BB NXT that isn’t currently available, but you can find other colors at StockX and GOAT.

A.D. Closes Out Heat on Both Ends

The Miami Heat never seemed to go away, but their constant comebacks was shut down by Anthony Davis. With the Lakers up 6 with under a minute left, the Brow swished a dagger 3 to sink the Heat’s hopes. He followed that up with a block and save on Jimmy Butler, with his defense vital in the clutch.

A.D. rocked the Nike Kobe 5 “5 Rings”, which you can find at StockX andGOAT.

The Lakers have lacked a consistent third scorer all season, but got that tonight with Kentavious Caldwell-Pope. The Los Angeles guard hit pivotal 3s tonight, including this heartbreaker with just over 2 minutes left in the game.

KCP rocked the Nike Kobe 5 Protro “Chaos” this game, which you can find at StockX, GOAT, and Flight Club.

Tyler Herro hasn’t had the best NBA Finals series, but the 20-year old can still bring the head-shaking highlights. Case in point, this floater that absolutely floated. Herro needed to arc the ball way high over the long arms of Davis, so the ball just hung above the shot clock before falling into the hoop.

The young Miami guard wore the Nike Kobe 5 Protro PJ Tucker PE this game. You can find this colorway at StockX and GOAT.

Duncan Robinson had a solid night from deep in game 4, even sinking this high arcing shot with time expiring. Alex Caruso Was in his grill, but Robinson somehow sank the shot off the glass.

Jewell(ry) But For Your Feet

The Nike Kobe 5s have been impressive in Orlando this year, but the most impressive might be Jewell Loyd’s tonight. Her gold and white PE really matched the new hardware, namely the Seattle Storm’s 4th championship trophy.

This colorway isn’t currently available, but you can find other options at StockX, GOAT, and Flight Club.

Speaking of the Storm, we saw Sue Bird win her 4th chip in one of the few WNBA PEs to release in recent times.

The #KeepSueFresh Nike Kyrie 5 can be found at StockX and GOAT.