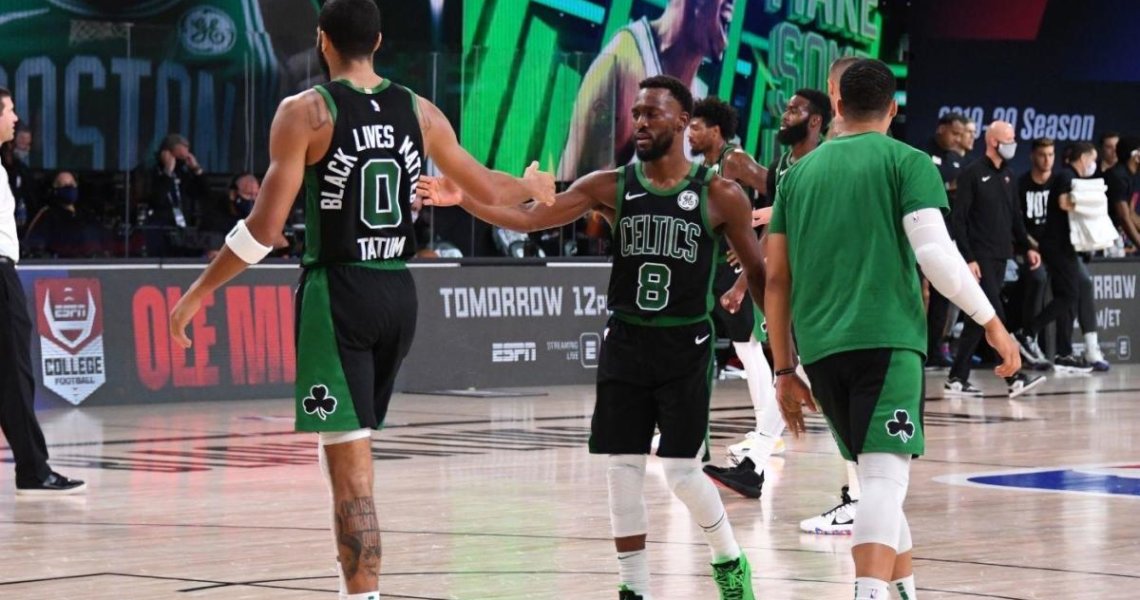 Welcome to Nightly Pro Notables: a collection of the hottest sneakers and biggest moments of the night on September 25, 2020.

Tonight we saw a hard fought performance from the Boston Celtics stars to avoid elimination in the Eastern Conference Finals. Game 5 didn’t look so hot early, with Duncan Robinson catching fire in the first half. The likes of Jayson Tatum and Jaylen Brown mounted a furious 3rd quarter reversal to get the bubble win though.

Aside from the highlights, we saw some heat on feet with tropical Kobes from Andre Iguodala. Without further ado, check below for all the moments and sneakers from another Disney World bubble game.

The Celtics best player showed fight tonight, getting buckets left and right. Jayson Tatum has looked slower all series, but really busted loose in the third quarter of game 5. The Boston star dropped 17 in the period alone on his way to a game-high 31.

Tatum’s confidence was evident, particular on plays like this spinning stepback:

Tatum rocked a “Taco Jay” PE of the Air Jordan 34 in this game, which isn’t available. You can find other colors at StockX and Dick’s Sporting Goods.

Jaylen J Was On Point

Playing the part of 1A as scorer was Jaylen Brown, who dropped an efficient 28 points tonight. Brown did everything from drive aggressively to the rim, to sinking threes with no hesitation.

Before the scoring burst from Brown and Tatum, we saw Duncan Robinson get all the buckets. After swishing his first handful of threes, the Celtics started crowding Duncan which gave him an easy layup.

Duncan Robinson rocked the “Blue Gaze” Nike KD 12 in this game, which you can find at StockX and GOAT.

Goran Hit Them Angles on this Shot

The main player holding the Heat together in the second half was Goran Dragic. Man was a bucket in the third, including this layup that kissed the top of the backboard with a few extra bounces for dramatic purposes.

Dragic laced up the adidas Dame 6 “Dame Time” in white, black and red this game. You can find this colorway at StockX and GOAT.

One of the Cleanest Kobe 5s Ever?

The game was close to finito midway through the 4th, but the kicks were interesting throughout. Andre Iguodala’s kicks in particular were eye-catching every time he checked in the game. In a nod to King James famous “South Beach” LeBron 8, Iggy rocked a turquoise and pink Nike Kobe 5 Protro this game.

Sadly, this pair likely will remain a PE but you can find other Kobe 5 Protros at StockX, GOAT, and Flight Club.

We’ve seen the same “Center of Gravity” Air Jordan 35 on the court for weeks but finally spotted a new colorway. Kemba Walker stepped on the court in a bright green version with his logo on the tongue.

There isn’t word of a release yet, but you can find other colors at StockX.

J’s with a Message

Enes Kanter changed the energy of the game tonight with his interior scoring off the bench. Notably on foot was a pair of the Air Jordan 13 “Reverse He Got Game” with the words “FREE POLITICAL PRISONERS” on the suede. Kanter has been deemed a political enemy of sorts by the Turkish government due to Enes’ critical words of president Tayyip Erdogan.