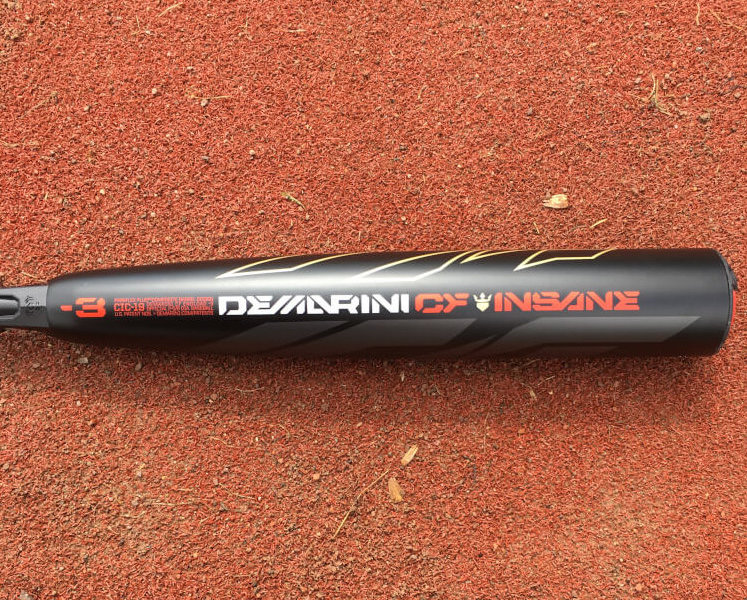 Designed for power hitters, the 2019 CF Insane is a slightly endloaded two-piece composite with a meaty barrel. This year’s bat is constructed of DeMarini’s new Paraflex+ composite.

This year, DeMarini decided to go with a darker, more ominous scheme for the CF series. The barrel is black and also includes gold, silver, dark gray, and red. All the secondary colors have a sparkle to them, especially the gold and silver. The handle is the same black as the barrel. The majority of the connection piece is black as well, but also includes two gray patches. The grip is covered in shiny little ‘D’s’. These give the grip a shinier look. The endcap is a powerful red. You can also customize the CF Insane on DeMarini’s custom builder here.

DeMarini introduced a new grip to this year’s line called the D-Tak. This name was drawn from the fact that the tackiness of the grip is provided by a bunch of raised ‘D’s’. This design works very well and there is a lot of friction provided by the grip no matter how you hold it in your hand. The grip is very firm and tapers into the knob.

DeMarini’s RCK knob is an ergonomic design that fits with your bottom hand very well. I’ve found that it limits excessive rubbing against my bottom hand while swinging. As someone who grips the bat with my bottom hand almost over the knob, I really appreciate this design because it’s much more comfortable to swing. I’m actually surprised more companies don’t offer endloaded full composites. I’ve played with several guys who love the feel of composite but don’t want to swing an ultra-light bat. If you are one of these players, the Insane is your best option.

The CF Insane is made of Paraflex+ composite that will take some time to break in. Regardless, I was impressed with its performance right out of the wrapper. The bat had a great whipping action during the swing and felt a bit stiffer on contact. This stiff feeling is a result of the extra mass in the barrel, which means the ball has less of an effect on its forward movement. The barrel provides a large sweet spot with a lot of room for error. Even if you miss the sweet spot a bit, the ball still comes off the bat hard. This forgiveness is one of the main reasons the CF series is one of the highest performing lines in the game. Because of its full composite design and DeMarini’s 3Fusion system, little to no vibration reaches your hands on mishits.

The CF Insane is in a class of its own, especially because there aren’t any other endloaded full composites on the market. It has the potential to be popular with a lot of hitters and I wouldn’t be surprised to see more bats like it in the coming years.