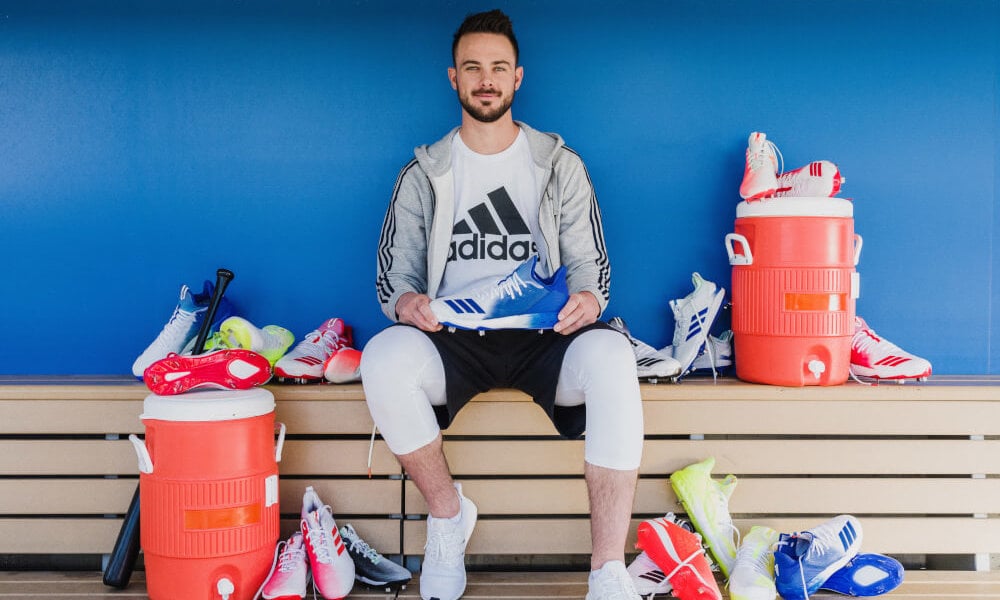 Adidas unveiled their new “Splash Pack” on October 2nd just in time for the Postseason, featuring the Afterburner V’s and Boost Icon 4’s. Inspired by the venerable Gatorade bath of victory, they come in Gatorade themed colors, including Lemon Lime, Red, Royal Blue and Orange in addition to Black. They already made their way on to the field during the AL Wild Card game on the feet of Luis Severino, Aroldis Chapman and Aaron Judge. The Boost Icon 4 “Splash” features a splash on the color on the heel, transitioning to white on the toe box, with matching 3-stripes branding and cleat plates. Also featured is a white Boost midsole. According to Adidas, its meant to mimic getting doused by a Gatorade shower from behind, when you least expect it. Additional details include a drip of color on the tongue tab as well as a cooler icon on the inside, and anodized water droplets throughout to enhance the wet effect. These really give new meaning to “drip.” The Icons bring a sneaker feel to the diamond and are just a flat-out sexy cleat. Adidas nailed it with these. The lightest cleats in baseball, the Afterburner V features an asymmetrical color scheme, with the color splash wrapping around the lateral side of the right shoe and white on the left, carrying over the droplet effect of the Icons. This has been the go-to cleat this year for guys like Billy Hamilton, Xander Bogaerts, Byron Buxton and Carlos Correa (Correa rocks a Boost version that us normal humans can’t get), and it’s easy to see why. Inspired by track spikes, they look fast. Here’s a good look at the variation between both feet. Though I’m an overall fan of the Afterburners, I prefer the symmetry of the Icons. All in all, it’s a solid cleat, and it’s nice to see Adidas hitting us with playoff colorways we can actually own.

Looks like he was rocking the Boost version instead of the Bounce variation he’s been rocking all season. Bounce is a firmer, heavier foam that provides increased stability compared to the ultra responsiveness of Boost. Word from Dame Lillard is that it also has a more natural feel. In case you haven’t noticed, Judge is a big dude, and that added stability makes a difference on the field.

This is what October baseball’s all about. #WildCard pic.twitter.com/cCDtnV8QDd

Though he only lasted 4 innings, Sevy scattered 2 hits and put up 0’s every inning out there, rocking the same model as Judge.

He was absolutely chucking. The Yankees might be the scariest Wild Card team ever. Chris Sale’s scowl for the camera is just as intimidating as it is on the bump. Adding a little more flair to his mound presence might not be necessary, but if you got it, flaunt it.

One of the first big names to switch over to the #CleatHead movement, Carlos Correa takes these Afterburner V’s onto the field when the defending champ Astros take on the Indians.

Shop the “Splash Pack” here and let us know what you think below.